Hiking with two good friends in southwest Lantau on the third day of the lunar new year of the dog :) 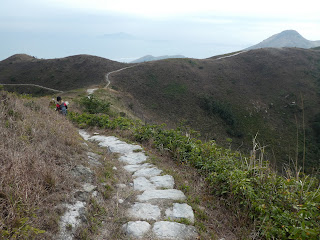 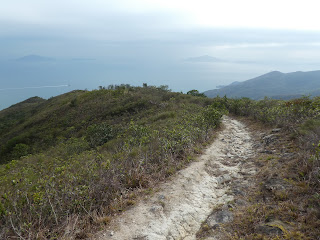 Not the edge of the world, though it sometimes looked like it! ;) 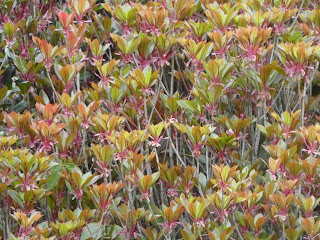 A veritable Chinese New Year flower bonanza this afternoon!
After resting for a day (during which I went and watched A Beautiful Moment at the cinema), I got back to hiking ways on the third day of the lunar new year of the dog.  And even though we're just into February, I already have an early candidate for hike of the year in the form of the one I went on earlier today!
Ever since I came across Man Cheung Po and Lung Tsai Ng Yuen (along with a "flying dragon") back on February 12th, 2012 while going along Sections 5 and 6 of the Lantau Trail, I've wanted to go back there and spend more time there as those sections of Lantau Island really did seem to be very pleasant sections of Hong Kong.  And a little more than a year ago, I did return to that part of Hong Kong's largest island by way of the Keung Shan Country Trail that allowed me to avoid having to go up (and down) the many hills of Section 5 of the Lantau Trail.
As it turned out though, I ended up not lingering in the area as much as I had wanted to because the conditions I encountered there were far more misty than I had hoped would be the case.  But thanks to that hike on the second day of Chinese New Year last year, I now knew of an easier way to get to that area: one that seemed very much following again -- as was the case this afternoon!
This time around, the weather gods were also cooperative: in that, while it rained a bit in places in Hong Kong in the morning, it was dry where my two friends and I ventured this afternoon, far from misty and even sunny at times, with bright blue skies peeking out from the clouds every once in a while.  And at various parts of our excursion, scenic, even downright spectacular views revealed themselves; with today's visual highlights for me including the spotting of clumps of pretty pink Chinese New Year flowers and a point during the hike when one looked out at a sea so similar in shade and color to the sky that it was hard to see where one ended and the already began!
At times even more enjoyable than the beautiful scenery around us, and as far as the eye could see, was the company of my two hiking buddies: one of whom used to be my regular hike companion until she returned to Canada a few years back and is currently back in Hong Kong to celebrate Chinese New Year; the other of whom is the erstwhile regular hiking buddy who coined the phrase "non-competitive hiking" to describe our preferred hiking style.  Here's the thing: I really like that we never obliged to hurry to make particular times and, instead, just walked along at a pace all three of us were comfortable with -- and did quite a bit of shooting the breeze while we were tramping along too!
Back when I was at secondary school in Penang, I used to regularly walk up and down the school field during recess while chatting with a friend (or was it vice versa?).  I also made it a habit while attending college at Beloit of spending quality time talking with friends while strolling up and down the campus.  And I have enjoyed my share of conversation-filled long walks with friends when I lived in Philadelphia too.
In Hong Kong, I do quite a bit of chatting with friends over meals and in bars but I also still very much enjoy chatting with friends while doing a bit of walking, or hiking as the case may be.  And as it so happens, the conversations today contributed quite a bit to making this afternoon's hike as fun as it was -- and, to my mind, helped further cement the friendship between the theree of us who went out hiking in Southwest Lantau together today. :)
Posted by YTSL at 11:59 PM

Maybe around here some may want to adventure out if there brave, and do some snow shoeing.
It at 18 (-7.7)
Coffee is on

Even in Wisconsin, the coldest part of the world I've ever lived in, I never saw people snow-shoeing -- though I did see some people cross-country skiing every once in a while and also ice fishing! At the same time, the authorities in Wisconsin were really good at clearing roads and sidewalks of snow before I stepped out to go to class, etc. in the morning -- unlike, say, Philadelphia where it seemed that every time it snowed in winter, that was a big surprise to the authorities there!