The special boxed meals that are ekiben 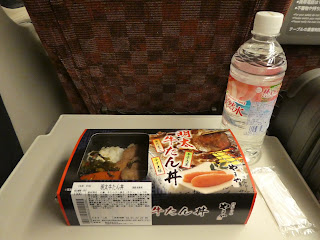 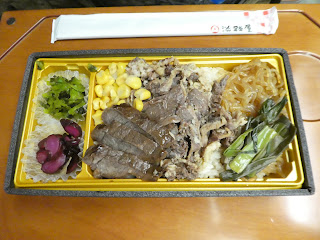 Another ekiben I had on this recent Japan visit
This recent Japan trip began in Fukuoka, a city on the island of Kyushu that actually was the very first place in Japan that I ever visited -- way back in the fall of 1982!  Many years later, I returned to Fukuoka on a trip that I'll forever associate with my having discovered the triple wonders that are Yokoyama Taikan's art, Hiroshima-style okonomiyaki, and mentaiko (a spicy pollock roe delicacy particularly associated with Fukuoka's Hakata ward).

So I found it symbolic and appropriate that on the shinkansen ride from Hakata Station to Hiroshima, I would dine on an ekiben that had mentaiko among its ingredients along with grilled ox tongue, pickled vegetables and rice.  And while that combination -- especially of fish roe and ox tongue -- may sound rather strange (and I will say that it's the first time that I ever had it together in a dish, boxed or not), I must say that I found it absolutely delicious!
So heavenly did I think that boxed meal tasted, in fact, that I inadvertently let go of my wheeled suitcase -- with the result being that it glided away from me and across the aisle into the row of seats over on the other side before I could react!  Fortunately, the startled solitary passenger in that row had enough sense to halt the movement of that suitcase, and without any damage to herself.  And it's a further measure of how much of a good mood that meal put me in that my embarassment over the incident soon faded away and I was able to quickly focus (fixate?) once more on my tasty ekiben!
Several days later, I had another boxed meal on the shinkansen.  This time around, the bento consisted of grilled marinated strips of beef, shirataki noodles (made from konnyaku), sweet corn and a few other vegetables, and rice.  But while the ingredients were pretty different, this ekiben also tasted pretty good -- and made me feel that it really makes for a nice experience to eat ekiben on board a shinkansen and understand why this is something that many local folks consider to be an integral experience when travelling by train in Japan.
For those who're wondering: there are meat-less ekiben.   There even are rice-less ekiben.  There actually even are ekiben that are self-heating!  And when you consider that one Michelin starred-Ueno of Miyajimaguchi's anagomeshi was originally created to be an ekiben, you know that these often aren't ordinary boxed meals -- and, indeed, really can be a gourmet's delight! ;b
Posted by YTSL at 11:12 PM