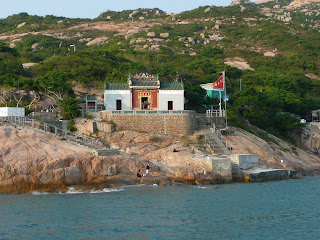 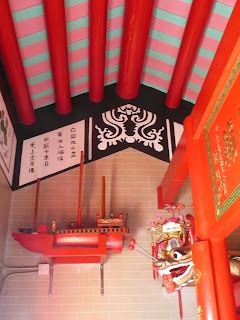 On picturesque Po Toi, Hong Kong's southern-most island, there lies a Tin Hau Temple that is neither the oldest nor largest in the Big Lychee. But this particular temple built to honor and worship the southern Chinese goddess of the sea has become known to many people who have never set foot in this part of the world due to it having been mentioned in The Honourable Schoolboy, a best-selling thriller written by British author John Le Carre.

Like many other Taoist temples in Hong Kong, the main building of this Po Toi temple has lots of Chinese writing on it. For starters, there's writing on a sign bearing the name of Tin Hau placed directly above its central entrance and there also are columns of Chinese characters emblazoned on either side of the doorway. In addition, a peek inside the nicely-maintained temple shows that more writing is to be found on columns inside the building and on the beams close to the ceiling.

Those who can read what has been written on different sections of the subject of this week's Photo Hunt entry will undoubtedly derive much from being able to do so. Those who cannot may at least appreciate their aesthetics -- and how it is that Chinese script often can be decorative as well as informative. (Hence it sometimes being used to adorn flags, lanterns and more besides the usual surfaces and suspects!) ;b

That is a beautiful temple.

Have a wonderful weekend!

Nice choice for the theme..

Wonderful!! You managed very well on this difficult theme. You are a very talented writer and your posts are always interesting. I have learned so much from you about HK and I really appreciate your posts. I love the decorative Chinese calligraphy, but unfortunately I can´t read it. I have trained to copy the script and I would love to have the words "Welcome to our house" on the wall in our main entrance, but I cant find a translation.
I wish you a happy weekend!

I agree on Chinese characters being lovely as a decorative design :) though I can read only very few Kanji. (Would really love to learn more) :)

this is so interesting..

Chinese writing looks like a drawing to me ! The temple is beautiful !

Chinese calligraphy is beautiful. i read The Honorable Schoolboy a long time ago--i'm racking my brains for this temple!:P

The exterior may not be much to look at but agree that the inside is beautiful. :)

Agree that this was a difficult theme and am glad you approve of my efforts. I wish I could help you to write "Welcome to our house" in Chinese but my Chinese writing is, alas, non existent too! :S

Sounds like we're at the same level with regards to Chinese! ;b

I know what you mean... especially with the Chinese characters for mountain and mouth! :D

Go to the final chapters of "The Honourable Schoolboy" re mention of Po Toi and the temple (and Tin Hau Festival). :)

I love the temple! The words I could not decipher but you are right ... the aesthetic made up for it.

I have always been fascinated by the Chinese script, but like the others, I can't read Chinese.

Looks like a lovely and very spiritual place :) Happy weekend!

Like the juxtaposition of the older middle exterior of the temple with its spiffy looking interior.

Every December I try to reread an old favorite and your post has helped me decide on The Honourable Schoolboy. Thanks.

Very beautiful temple. And the writing on the wall, wish I could read it.
Written

Chinese aesthetics have always been fascinating and beautiful.

Small consolation I know but I've been told that there's a cursive Chinese script that even those who can read "regular" Chinese writing can't read!

I've begun to recognize and be able to read a few Chinese characters (like those for Tin Hau) but the majority pass me by too -- alas. :(

Yes, it's still a working temple utilised by believers -- and I find that pretty cool. :)

Will be interested to see if re-reading The Honourable Schoolboy will make you want to go and visit Po Toi some day in the near future! :b

Your sentiments are shared by quite a few of your fellow Photo Hunters, it'd seem. ;b

Hmmm re "always" but would agree that yes, it really often can be! :D

You're making me wish I could read it.

That's a beautiful temple and an interesting post. I enjoy reading what you have written for photohunters. Happy weekend.

A place for and of peace. Interesting to read indeed. Please have a wonderful Sunday.

p.s.: it was only yesterday that I found this theme challenge, it would be wonderful to see you next week again.

Better go learn how to read Chinese then! ;b

Thanks, as has become usual each week, for coming over and looking, reading and appreciating. :)

Welcome to my blog and to Photo Hunting. :)

Chinese Temple always interest me , with their intricate designs!
The Armenian Church is Hill Street, next to Central Fire Station and across from the Funan Centre- which is popular place to buy electronics. It's just a small church and it always welcome visitors of any race.

The location of the temple makes it a quiet place for worship. I love visiting temples, this is an interesting find.

Great shots. It seems as if writing in churches is something that spans religions and cultures . . . it is one of the things I always look for when I visit a new church.

Sorry, am not that familiar with Singaporean geography -- but will assume that the Armenian Church you featured in your Photo Hunt is indeed located in your home country! ;b

Actually, I think it can be a pretty unquiet space at times -- in particular on Tin Hau's Birthday! ;b

Hmmm, isn't the word "church" used only for Christian establishments? OTOH, the word "temple" seems more widely applicable... (Sorry, am on a linguistic kick. Cf. the post I recently wrote up before coming to respond to your comments on this thread!)

You're welcome -- and thank you for looking, reading and appreciating. :)