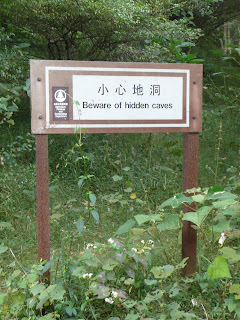 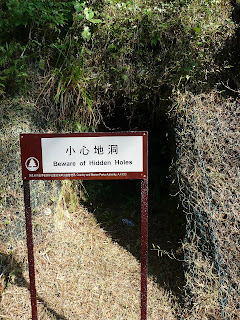 Another sign seen in the same country park
earlier today bearing a different English end word
but all the same Chinese characters! :O

When my regular hiking companion (the fuzzyflyingbunny) and I were in Tai Lam Country Park last week, we spotted a sign that got us laughing as it caused us to have visions of caves jumping out from some hidden space in a bid to waylay us. This Sunday, if a sign we saw in the same country park was to be believed, we were being threatened by "hidden holes" rather than "hidden caves".

After chuckling over this other sign (that is one of those official "beware" signs found in Hong Kong that -- sorry, but 'tis true! -- I have problems taking seriously), we spotted a cave-like hole behind it that wasn't particularly hidden but we agreed we wouldn't want to go into... and got to wondering why that particular dark space -- which, as far as we could see, looked like it went back quite a distance from its opening -- was considered a mere hole as opposed to a cave.

At this point, we had hitherto focused on the English wording of the signs but now our attention turned to the Chinese characters on the signs. What if, one of us mused, they are the same on the two signs? And after checking them each other again, this is something I can confirm to be the case! (See the two photos above for proof!!)

So... is the Chinese word for "cave" the same as for "hole"? And sorry, I can't answer this question because my Hokkien vocabulary -- never mind my Cantonese one -- does not extend to caves! (What can I say besides say "yes, I really am an urbanite!")

At the same time, what I do know is that there are several instances of there being but a single Chinese word for which there are two different words in English. For example, there is only one equivalent word in each Chinese dialect for what in English are separate species of animals -- "rabbit"/"hare", "mouse"/"rat", and "goat"/"sheep". In addition, like many other languages, the Chinese language does not have masculine and feminine personal pronouns; consequently, the English "he", "she" and "it" would translate into the same Chinese word.

Less it be thought, though, that this kind of thing only works one way, here's pointing out that whereas the English "rice" can be used for both uncooked and cooked rice, there are separate words (not just adjectives) for those kinds of rice in Chinese (and, for that matter, Bahasa Malaysia too).

But back to cave and hole: some illumination on this matter would be much appreciated. This especially since the sign asking us to beware of hidden caves was near to a hole in the ground whereas that asking us to beware of hidden holes was right in front of a hole in what amounted to a vertical earth wall! Put another way: the not so hidden hole in question looked more like a cave than the not so hidden "cave" we saw last week!

(Tuzki demonstrates how thinking about this linguistic conundrum has made me feel!)
Posted by YTSL at 10:28 PM

I always loved when my Chinese Tao teacher would talk about "Year of Mouse."

Glad to have discovered your blog.

I looked it up on CantoDict:

地洞 is a dugout or a burrow, which I found by accident using Cantofish on the word for cavern, which is 大地洞.

Obviously it would be better if a native speaker addressed your question but I thought I get the ball rolling.

You've given me an idea with your suggestion -- as I have a couple of friends who actually write the English subtitles for some Hong Kong movies! :DDD

And I'm glad too that you've discovered my blog. Re yours: care to tell me how you decide what subjects are yin and which are yang? :b

Thanks for getting the ball rolling. I know of native Cantonese speakers who check out my blog... but usually are disinclined to comment on it (but, instead, let me know verbally or via e-mail that they've read it). Maybe your comments might get them to "uncloak"!!! :D

@YTSL--I was wondering when someone would ask me that. Generally, the yin is about darker passive things, and film, sometimes where I futilely rant about things; the yang is usually about books and painting, cooking, more active creative things. I'd like to say it was clearly creative vs. receptive, positive-negative thing, but of course they have elements of each within. It's just the feeling I get with a topic. I would have normally done "Huang Shi" as a yin post but because it was really about my interest in that history which I had talked about before (Rewi Alley and Graham Peck et al.) It all started by accident anyway so I just went with it. I inadvertently created two blogs sites; out of one action came two things.

I miss Hong Kong very much, and the blogs I follow keep me in touch with the feelings I have about it.

Thanks for the explanation -- and if you're wondering, am trying to decide which blog of yours to check/follow/maybe eventually link to. :)

Aloha again,
I was so interested in this quandary about holes and caves, that I went to my pinyin dictionary and see that the last character is dong, (falling tone) and means...hole, cave, or cavity (like in a tooth.) As Diana also confirmed. Now, thanks to you, I will recognize this character henceforth. Who knows, you may have saved my life. I will not fall into oblivion...or be a victim of bad dentistry!

Wah at the thought of possibly saving your life in advance! :D

And update: a native Cantonese-speaker friend told me that there's a word that you can add to "dong" that makes it so that it specifically means "cave". Otherwise, like you and Diana point out, it indeed also can mean hole, etc. :)