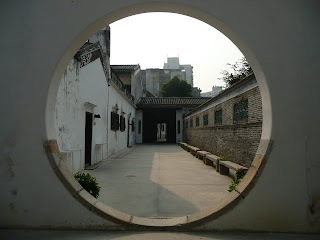 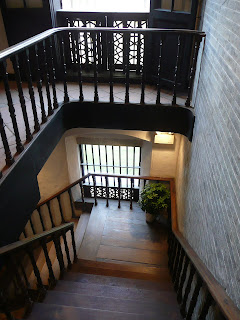 The historic house is now open to the public after being
closed for 8 years -- during which extensive conservation
work was carried out on the 4,000 square meter locale 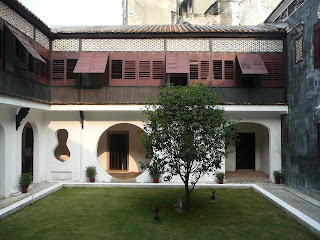 A view of the idyllic inner courtyard and cloister
that I can imagine being a favorite space for many
of the folks who lived in the house over the years
Close to ten years ago now, I visited Macau for the first time with my mother and a group of her Hong Konger friends whose primary reason for heading to "the other SAR" was to embark on an almost non-stop eating tour that included at least one milk dessert and a delicious dinner at O Manel -- and whose only non-culinary concession was to go for a quick look the iconic Ruins of St Paul's (Church).

In the intervening years, I've been to the former Portuguese enclave a few other times for work (one published outcome of which can be seen here) as well as pleasure. And while I have to admit that I generally do go to Macau primarily for its food, I've also definitely devoted some time since to checking out some of the its other attractions, notably those within its UNESCO World Heritage-listed Historic Center.

Indeed, ever since I came across a New York Times article giving a heads up to the Mandarin's House's re-opening after 8 years of being closed for conservation work, the culture vulture part of me has been hankering to check out the 60-room, 19th-century dwelling that remains the territory's largest space devoted to private residence. And earlier this week, I finally paid a visit to the cultural heritage attraction that recommends advance reservation as there's a system in place that commendably allows a maximum of 100 visitors into the complex -- and a maximum of 60 people into the main building -- at any one time.

Located near the heart of Portuguese Macau that is Lilau Square, the Mandarin's House is an interesting architectural blend of traditional Guangdong style and western architectural detailing. Additionally, like with Penang's Cheong Fatt Tze Mansion, its designers and builders look to have taken into account local weather conditions and created a residence that wasn't only physically luxurious but also impressively comfortable -- with such as lots of windows and vents to let the air in, and open spaces within the buildings to allow the air to circulate.

Unfortunately, however, the individuals who initiated and saw to the completion of the building (Zheng Wenrui and his revered son, Zheng Guangying, a merchant who also is credited with having authored an influential tome entitled Words of Warning in Times of Prosperity), could not prevent the mansion's views of the Inner Harbour and the hills across the river to over the years becoming obstructed by other edifices over the years. Neither could they have probably foreseen their beautiful residence getting divided into multiple dwellings and rented out by their descendants to up to sixty other families at a time.

Even after eight years of conservation work, the Mandarin's House does not look to be in pristine condition, with stains still evident on white-washed walls and a ruined and overgrown area visible through the wall erected to prevent the public from entering that space. As was evident during my visit though, work is continuing on and at the place that I am happy to have been able to finally visit after all these years.

Something else that gladdens my heart is to know the powers that be appreciate that it is worthy of being restored, looked after and treasured -- as opposed to declared a lost cause that would be easier to just knock down and replace with something newer and probably far less beautiful. Put another way: old isn't necessarily mold and can, infact, be gold and good! :)

Thanks for this write-up - we may check it out next time we're in the "enclave".

You're welcome -- and if you do check out the Mandarin's House, please be aware that it's closed Wednesdays and Thursdays (something that I regret not realizing before I took my mother to Macau on her most recent visit to this part of the world!).