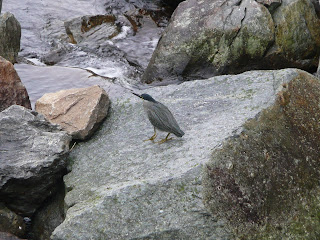 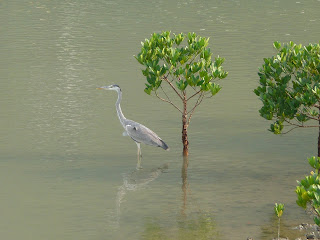 Spotted in the mangrove swamps on the edge of Tai O 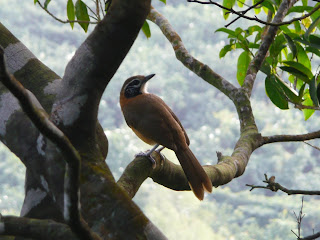 Spotted on a tree near Amah Rock
(Might this be a Masked Laughing Thrush?!)
Today is Thanksgiving Day for Americans. Since I'm not an American, I don't celebrate it. At the same time, due to such as my having lived in the US for close to a decade and half (and the main calendar in my abode being that which was given to me by my American alma mater), I tend to have a good idea when Thanksgiving Day falls each year.

During my time in the US, I ended up spending Thanksgiving on a number of occasions with American friends and their families. Invariably, Thanksgiving Dinner would involve our eating far too much turkey and lots of other things in the bargain. (And this despite turkey actually being among my least favorite birds to eat!)

What with this Thanksgiving Day being spent in Hong Kong, I've not felt obliged to go out and have a turkey dinner this evening. At the same time though, I can't seem to get birds out of my mind! Consequently, I figured that today would be as good as any to put up a trio of bird pics that I've snapped this past month -- all of which I like very much and feel quite lucky to have managed to take (especially since I have no telephoto lens to call my own, and definitely nothing in terms of camera equipment that approaches the size and sophistication of many a dedicated birding enthusiast that I've seen here in the Big Lychee!).

If nothing else, my bird photos should help provide evidence that feathered beauties abound in Asia's World City. Furthermore, as a birdwatcher who came all the way from Cornwall, England, to Hong Kong noted, the territory may be small but it is geographically diverse and consequently possesses a range of habitats (e.g., wetlands, forests, shrublands and grasslands) that attract a great variety of birds -- some of them migratory, others of which stay in Hong Kong all year round.

So, sometimes with not much more than a little bit of luck, one truly will be able to spot the kind of bird that makes for an eye-catching sight... and get a photographic capture worth celebrating (or, at least, taking some joy out of having done so) in the bargain! :)

Addendum: It's not about Hong Kong birds or birdwatchers but I'd like to use the opportunity provided by this blog entry to give a shout out to Nicholas Drayson's A Guide to the Birds of East Africa. A book that, despite its title possibly leading you to think otherwise, is a novel set in Nairobi, Kenya, rather than an ornithological field guide, it is a charming tome filled with interesting characters -- many of whom I would be happy to meet again in a follow-up work.

Nice post for Thanksgiving. This year I celebrate the Canadian Thanksgiving while I was in the State. So it didn't feel much like Thanksgiving yesterday.

I didn't know until you mentioned it that there was such a thing as a Canadian Thanksgiving! Then I Googled and learnt more about it. :)

I think those bird photos are great!

Glad you like the bird pics. As for myself: I can't decide which of the three I like the best! :D