From Shek Kong to Ma On Kong Part II (photo-essay)

How long would it take you to complete a hike along a largely even 11 kilometer trail? The official estimates for that from Shek Kong to Ma On Kong is 3 1/2 hours but when my regular hiking companion and I went along it, we took closer to 4 1/2 hours to complete the hike -- and I have to say that we've become used to having to add one extra hour to official hike estimates here in Hong Kong.

The major reason for this being so isn't that our walking pace per se is slow but, rather, because we tend to stop so often to take photographs along the way! To be sure though, this state of affairs is not something that we're all that upset about. And in point of fact, we have come to gauge our hikes together by how many photos we take while on them -- with a higher number of shots pointing to the hike being one in which we came across many more interesting things and/or scenic vistas than those treks which yielded a smaller number of snaps... 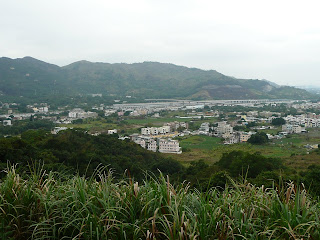 Looking out to the northwest from near the middle of the hike,
one sees countryside with major transportation lines
(for trains and cars) prominently running through it 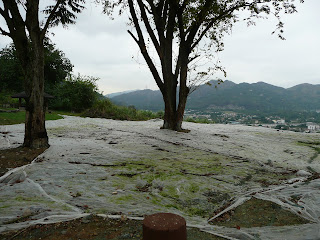 Closer to the trail, ground covering that I am assuming
actually has a practical, protective reason for being there
(also) looks to have turned the space into something
akin to a modern art installation! ;b 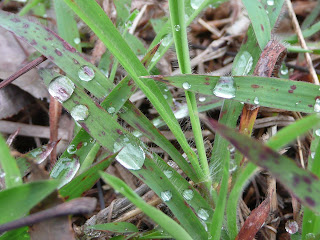 Nature too shows its artistic side -- in particular,
I really like how the drops of water look
when they're on thin blades of green grass/foliage 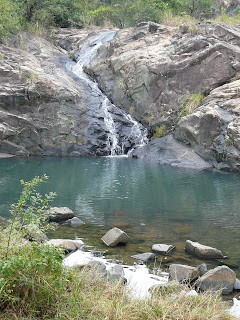 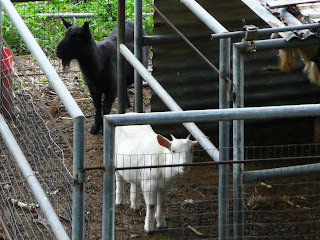 Also nearby is Ho Pui village, one of whose households
rears goats -- including this pair -- in the area 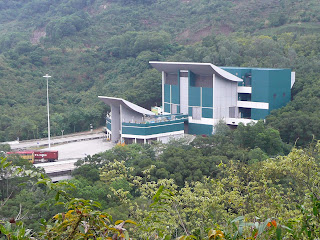 The northern entrance to/southern exit of
the Tai Lam Tunnel, one of Hong Kong's many major tunnels
that go through hills and under Victoria Harbour 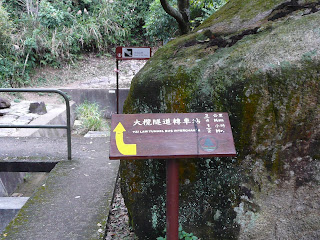 With slightly less than 1 kilometer of the trail to go,
it suddenly goes behind a tunnel and leave the catch water
(necessitating a sign alerting people to that fact) Before the trail led us downhill towards its conclusion,
I took this photo looking eastwards towards the Kwun Yam Shan
that is not on Lantau and mist-covered Tai Mo Shan,
and back to the area (now some 10 kilometers away)
where we had begun our hike