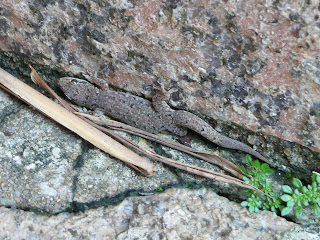 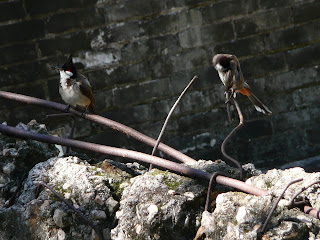 As regular visitors to this blog who venture beyond the Photo Hunt entries know, I've seen my share of interesting critters while out hiking (and sometimes even before the hike proper began!). But what I want to highlight in this entry is how many creatures beyond humans also seem alive and at home outside of Hong Kong's 24 country parks (and one officially designated "special area") and five marine parks and reserves.

For example, when I worked in Wan Chai (firstly in an office up on the 13th floor and then -- after the company moved -- to a second office on the 8th floor of another building), I'd regularly see large black kites (the birds, not the human-made objects!) gliding in the sky, sometimes at around our level, between buildings as well as above them! (A little known fact about Hong Kong: around 500 different species of birds have been spotted in the territory. And Asia's World City most definitely has its share of keen birdwatchers, some of whom I've seen armed with a most magnificent collection of cameras and super sized lenses!)

Additionally, at ground level, more than once now, I have been amused by the sight of a colorful butterfly wending its way along a busy street along with a crowd of human pedestrians. (Alternatively (and touching wood!), I am glad that urban Hong Kong is not home to quite as many mosquitoes as, say, Malaysia, let alone malaria-infested Tanzania where I had to sleep under mosquito nets each night.)

For those who are particularly interested in knowing where I saw the creatures in the photos above: the lizard was spotted right next to the Kwun Yam Temple on the island of Cheung Chau that lies above Kwun Yam Beach (Incidentally, I like how it stayed very still even though it was very much alive... hoping that its camouflage would allow it to blend in unnoticed with its surroundings -- all the easier to take a photo of as a result!); while I saw the two birds resting atop the ruins of the old South Gate at Kowloon Walled City Park.

And yes, strange as it may seem, viewing nature -- be it in the concrete jungle or "wild" -- really does play a part in making me feel thankful to be alive and part of this world along with them. This is because their very -- and continued -- existence gets me thinking that amidst all the doom and gloom discussions of humanity's environmentally destructive tendencies, nature may well be more resilient than we often give it credit for after all. :)

This was a great post for the theme. Viewing nature is up there on my list of things that make me greatful to be alive. I love seeing birds and other animals in cities. It helps when cities have parks and open spaces for the animals but even without them, so many species seem to find their place amongst buildings.

this is a marvelous post. i noticed the birds in HK and it's amazing how you can do some bird-watching while in a sky-scrapper.:p i work on the 15th floor for 11 years now and i've never seen a bird flying outside my window!:(

i miss walking with these creatures. been planning to go to the nearby "forest" but the weather is just miserable.

Wonderful take on the theme, love your shots. Here's to Nature!
alive!

Glad you liked the post. And yes, it does help when cities have parks and open spaces -- and even more when, like Hong Kong, they are so close to the countryside! :)

Believe it or not, sometimes the birds would get so close to my office window that many a time, I worried that they'd smash through them. Thankfully, they never did! :D

Here's to Nature indeed -- and cheers to its continued existence and resilience too! :)

Thanks for dropping by two weeks ago. Nice one for the theme. Have a great weekend!

Life persists everywhere, even wild life. In some of the big cities of America the peregrine falcon has discovered that sky scrapers make fine cliffs and there are lots of pigeons and rats to eat.

I like your post for this theme. I think that nature will prevail, despite everything humans are doing. Happy weekend.

They are certainly are alive. It is always nice to have a connection to nature - even a brief flash of movement to let you know that there is something existing in the concrete.

Many people won't believe HK has all these creatures. They know about the yummy food and lots of shopping only. hehe....

Very interesting post! I love to spot "critters" hiding in rocks and such. Great for the theme!

That is a beautiful lizard, wonderfully photographed. Have a great weekend

Hi YSTL, cool photos and very interesting and informative post and take on this week's theme. I was surprised with the large number of species of birds. So many interesting things I'm learning about Hong Kong.

Thanks so much for sharing. Have a wonderful weekend.

Wow those are great photos for the theme!

I love being with nature too. But those live animals and critters on the way don't pose for me like they do to you.

Love your Penang Eats post. I didn't realize Penang is such a foodie destination.

I am a big fan of nature. That is why I have kids.

Thanks for dropping by, even if two weeks late! ;b

And happy Photohunting to you too. :)

Thanks for the info re the peregrine falcon. Also, thanks for the message you left tnchick on her blog - really like it.

I hope nature will prevail. But I think we also need to do our bit to help it do so... (e.g., less pollution on our parts would be good!)

Don't know about always after getting bites from mosquitoes and such but otherwise, agree with your comments. ;)

Yes... seems like certain people should get out of the shopping malls and restaurants more when they visit next time... ;b

Especially when I'm out hiking, I do like to make time to -- if not smell the roses, then at least spot the critters! :D

Glad you like that shot. And happy weekend to you too. :)

Yay re my blog doing its part to help you learn more about Hong Kong (and go beyond the stereotypes of it)! :)

By themselves, the photos may not seem great. So I appreciate Photo Hunt for the themes and also the opportunity to add a commentary to the entry. :)

Hahaha, hadn't thought of the crocodile resemblance but yeah, you've got something there! :D

I've come across my share of creatures that don't like to pose as well (including many, many beautiful butterflies). Ah well...

As for Penang (in the previous post): yeah, it's funny how many non-Asians go there for the sights and beach whereas the Asians tend to make a beeline for its food! :D

Hahaha... FYI, an anthropology course I took at college used to be called "The Human Animal". And before that, it was "Man, the Animal"! :D

Those little lizards can really move fast when they want to! Nice post on the creatures in your city.

Most definitely re lizards being speedy creatures! So I was pleasantly surprised that one decided to so nicely pose for me... ;D

Terrific post for the theme :) Nature and wildlife make me feel alive too :)

Hi YTSL. For some reason I was stumped this week so didn't participate in PH. But of course now I realize I have a million alive things in the archives I could have used.

Thanks for your good wishes. I am doing fine really, only lately able to write about it all on the blog. So posts about it appear interspersed among other topics. Just a couple more to write. Hopefully I am "cured" after the various treatments and I just need a burst of energy to be fully recovered.

See you next week I hope.

Good to learn that you're okay. Please take care and yup, hope we'll both be Photo Hunting next week and for some time to come. :)

I love how the gecko or lizard blends in with the rock. Perfect for hiding.

Luckily for me, the little critter didn't blend in TOO well -- hence my being able to spot it! ;b