In the Realm of the Senses (movie review) 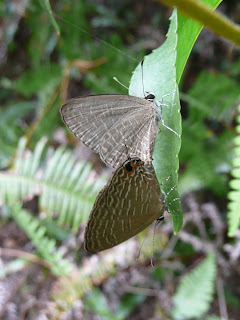 Back in the conservative 1980s, I attended a liberal arts college in Wisconsin that was actively liberal in many ways. A case in point: as part of its orientation program for my class, Beloit College offered up free screenings of a range of movies that included both Alfred Hitchcock's North by Northwest and Nagisa Oshima's Merry Christmas, Mr. Lawrence.

In the intervening years, I've had the privilege of attending big screen viewings of quite a few more films by the Japanese auteur (including Gohatto (1999), The Ceremony (1971) and his feature film debut, A Street of Love and Hope (1959)). But it was only last week that a big screen screening of the work he is most famed for came by my way.

Considering its notorious reputation (and mine as someone who tends to shirk away from viewing on-screen nudity), however, I have to admit to hesitating somewhat before going ahead and purchasing my ticket to a screening of the infamous In the Realm of the Senses. Put another way: I knew full well that viewing a cinematic work that, to this day, cannot be shown uncut and digital masking in Japan in that particular setting would involve having to watch two people having real -- as opposed to simulating having -- sex on a large screen in a big, even if darkened, room filled with other people in it!

Still, there is no question that In the Realm of the Senses is considered a cinematic masterpiece by many people. And my previous experience of viewing works by Oshima -- some of which were not exactly sex scene-less -- had me coming away very impressed by his film-making and also feeling that I had been sucked (no pun intended -- really!) into the often very culturally alien worlds depicted in those works. Consequently, I decided to trust my instincts and check out the historical drama about a prostitute turned maid named Sada who falls hard for Kichizo, the charming master of the inn that she goes to work in.

Since the film's story is derived from a real-life incident that took place in 1936, it would seem that (spoiler warning) many of its intended audience would have known that Sada and Kichizo's affair ended with her erotically strangling him to death, then bobbiting him before being found wandering about and carrying his reproductive organs on her (end of spoiler warning). However, I have to admit to having only known about this through viewing the movie -- though it also has to be said that I definitely could see this development taking place from fairly early on in the work (when Sada tells Kichizo that she so likes the feeling of his male member inside of her that she would want to cut it off after he were dead).

In addition, I actually hadn't realized -- and thus was close to overwhelmed upon discovering -- how much of In the Realm of the Senses consisted only of sex scenes! All told, I'd conservatively estimate that fully 85 percent of the film depicts its main couple engaged in sex acts! And while a few of the scenes are shot in ways that got me thinking that perhaps they were simulated, many others were shot from angles and in ways that made it patently clear that those acts were most definitely not being faked!! (And I have to point out that these included one involving the insertion of a whole chicken's egg into a certain orifice of the human female body that such objects really should not be inserted into!!!)

Unexpectedly though, the sheer amount of screen time devoted to showing the protagonists engaged in sex actually caused my senses to dull somewhat during the middle part of the movie -- and I actually found myself yawning a couple of times during the film! At the same time, this is not to say that I found the depiction of sex in the work to be sense-less -- and, indeed, it actually got me to think and compare and contrast how sex, the human body and such is depicted in this unquestionably thought-provoking work vis a vis most other movies I've seen.

All in all, if one could cast aside the fact of the sex on display being real (rather than simulated) and that there's so much of it in the work (and yes, I know that these are two big "asks" indeed!), the truth of the matter is that what is depicted is actually much more natural, less glamorous and even less exciting (even if by no means uncreative) than much of the "sex" in many a commercial as well as art-house film I've seen. Something else that I felt impressed by was how I was being shown a female enjoying sex very much -- and more so than the man (who was noticeably getting physically tired by the female's uncommon sexual appetite).

Nonetheless, I don't think it would be fair to label Sada an out and out (sexual) predator since, among other things, it was Kichizo who actually made the first move to initiate a relationship between the two of them. Alternatively, neither is she a victim as she had been active in a relationship whose actual length I had some difficulty figuring out. (This particularly since they were cocooned indoors so much that one hardly ever can tell whether it's day or night out in the rest of the world.)

Made half a century after the incident that inspired it, In the Realm of the Senses is a film that continues to strongly impress close to 35 years on after its original year of release. And lest it be unclear: if I were asked where I stand on the "is it porn?" question, my answer would be an emphatic "no"; this not least since this work -- whose viewing I consider to be an experience akin in some ways to running a marathon! -- didn't titillate even one tenth as much as it got me contemplating and musing a whole host of subjects, including the nature of human relations but also film-making techniques!

LOL regarding your choice of photo to illustrate this film, which I never could have imagined seeing reviewed on your blog. ;)

I'm a big fan of Oshima's films, including this one. And I totally agree with you that it is more thought-provoking than titillating. I think the film and the relationship it depicts is especially interesting in relation to the period in which it occurs -- the Sino-Japanese war, only obliquely hinted at during the film. At a time when young Japanese were marching off to kill and being asked to sacrifice their lives for a questionable cause, a lone man goes completely against the current and seeks annihilation in pleasure (not war) and in the end gives his life (accidentally or not) to the woman he loves. The sexuality depicted in the story is a sharp contract to that which was occurring on the battlefield in such places as Nanjing.

In the Realm of the Senses is a powerful film and one that definitely rewards repeated viewings.

Yes. A very surprising post! I have all but forgotten about this film. I saw it maybe 15 years ago, in my teens, as I was exploring world cinema. What a wonderful write up, YTSL. I have to revisit this one soon. Thanks =)

Thanks for your commentary on seeing In the Realm of the Senses.

It is an extraordinary film isn't it?

I don't know if you are familiar with the following essay but you may care to read it:

Re the film: hear, hear re the juxtapositioning of what the story focused on vis a vis what was happening in and with Japanese society as a whole in 1936. And agree too that it's a poweful film -- but, hmm, am not sure if I'll be viewing the film more than once! :D

Goodness re your viewing the film in your teens! It must have blown your mind! Even though my teenage days are long past, it was quite the eye-popper for me. (And yes, it's true enough that this post is an unusual one for me but I figured that a new review from me was overdue and this was the movie I've most recently seen that has most stuck in my mind! :D)

An extraordinary film indeed -- one which has stood the test of time. And yes, I've read the Donald Ritchie piece -- but thanks for reminding me of its URL. :)

Great review. Made me want to see it again even on a small screen. Yeah Netflix!

Wow, you've seen it already too! Seems like I'm a real Johnny (or should it be Jane?)-come-lately with regards to this movie... but thanks for liking the review all the same. :)

@sbk
Totally agree with what you said about YTSL's film reviews! Hope she gets the time to write them more often!!

"Totally agree with what you said about YTSL's film reviews! Hope she gets the time to write them more often!!"


After getting over the shock of learning you have actually watched this film (knowing how you do not care of on screen nudity) I applaud your review.

I'm of the similar opinion with you and interestingly some of the non sex scenes stayed with me even though it is probably 5 years since I watched this film.

Thanks for dropping by and reading and appreciating. And when I feel I have something interesting to say/share about a film, I'll try to find time to write a review of it. :)

Thanks and heheh, yeah, I guess I have surprised many people by watching "In the Realm of the Senses" (and then writing a review of it)! :D