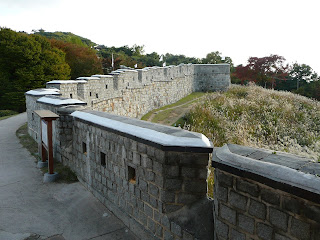 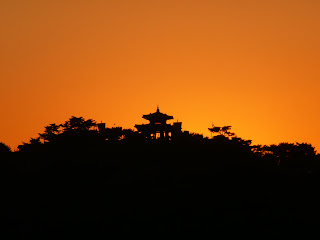 Recently on my blog, I've been posting photos galore of rocky Po Toi, Hong Kong's southernmost island where I went on a hike some months ago that yielded various interesting views and sights. Although it wasn't a hike per se, another scenic walk that yielded a plethora of photos to share with this blog's visitors was one that I took along the walls of Suwon's Hwaseong Fortress on my Korean vacation back last October.

A fortress dating back to the late 18th century that also was built as a memorial by a filial son (King Jeongjyo of Joseon) to his unfortunate father who was ordered to be sealed alive in a rice chest by his own father (Jeongjyo's grandfather), it was inscribed on the UNESCO World Heritage List in 1997. Measuring some 5.74 kilometers (3.57 miles) in length it total, it more or less encircles the Suwon old city center (which includes a palace, the Hwaseong Haenggung, that is another noteworthy attraction in and of itself).

On a beautiful fall day like the one I was fortunate to be greeted with on my visit to Suwon, the walk is a very pleasant one indeed. Those thinking of doing it should be forewarned though that it begins with a bit of a hike up a hill and then follows a path alternately atop or alongside the fortress walls that undulates somewhat along the way.

So, the easy way to see what's there is to check my photo-essays #1, #2 and #3 of Hwaseong Fortress. But my visit to this superb memorial that has now stood for over 200 years yielded so many other photos, including the pair in this Photo Hunt entry that I had not previously put up of and, I reckon, well shows the fortification's strength and beauty. (For the record, the second photo is of the fortress' Seojangdae (West Command Post) in silhouette at sunset.)

What a beautiful place. Both photographs are excellent and for interesting information. Happy weekend.

Lovely. I really enjoyed my visits to Korea. The most Scottish of Asian countries.

Lovely spot YTSL and you made the most of it with your photos.

very interesting story. I have heard of other people killing you, but have yet to hear about a father killing his own son.

Looks like an extenstion of the great wall of China.

The American soldier were here. They were very popluar with the local girls. The local boys have gone to war. the amercians had chocolate and stockings.

i was just with a colleague from HK and she was telling me about her treks around the islands. these photos are wonderful. i'd love visiting this place.

That's a lovely place. Thanks for sharing the interesting background behind it. It must be great to walk along that great place.

these are so beautiful!!

Wow! This is a piece of history I do not know. Thanks for the sharing. :)

Wow that is impressive. Great photos.

Happy PH, mine is posted here.

Ana amazing feat of architecture that has withstood time and a fascinating history!

That is a beautiful photograph!

Beautiful photos! Thank you for sharing and have a happy weekend.

Thanks -- and yes, Hwaseong Fortress and the area around it are indeed beautiful places. :)

Korea -- Scottish? Actually, thought the Koreans were the Irish of Asia! :D

That's really the first time you heard of a father killing a son? Wow if so...

So... did the American soldiers based in New Zealand ever go to battle from there or did they play a lot while there? ;b

Glad to hear that your Hong Kong colleague's been filling you in on hiking in Hong Kong. So... did you check out my Po Toi hiking photo-essays? ;b

Thanks for reading and looking -- and maybe some day, you'll get to enjoy a walk atop the walls of Hwaseong Fortress too. :)

Thanks for reading and you're welcome re the sharing. :)

If truth be told, gather that war destroyed some sections of the fortress but it's been rebuilt. But the restorers sure have done a great job! :)

Actually, don't think you're that late. Thanks for visiting! :)

Lovely sunset! BTW you're not late, it's only Saturday morning here in the US.

Yup re it still being Saturday in some parts of the world as I write! ;b

I was looking forward to see what you would post about. I love the second photo. It is interesting to see how modern city has built up around it. It would be worth the steep climb up to explore. Beautiful.

Sorry I'm late getting to your PhotoHunt post. What a sad story, and by his own father. Anyway it is a great photo of a great memorial.

I love that second photo too -- and can hardly believe that I didn't post it on the blog until this past weekend! Ah well, situation now remedied! :)

Better late than never! And re the prince: at least he had a filial son...