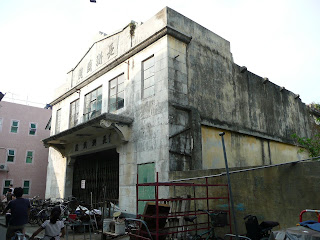 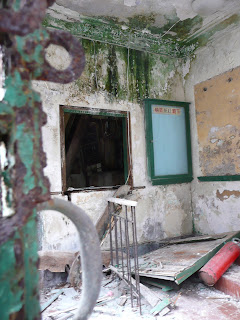 How that which was the ticketing area
looks in May 2010
Some years back, before I moved to Hong Kong to live and work, two friends (including SBK) and I decided to spend one of our vacation days on Cheung Chau. For the most part, we were content to wander around fairly aimlessly and soak up the atmosphere to be found on this quiet -- especially on a week day -- island that's located just 10 kilometers away from Hong Kong Island but really can feel like a world apart from the busier and far more populous part of The Big Lychee.

At the same time however, the Hong Kong movie buff parts of SBK and myself also made it a point to visit locales that had become familiar to us via Riley Yip's charming coming of age movie that also works very well as a paean to Chinese cinema (Hong Kong but also Taiwanese). Thus it was that we were uncommonly thrilled when we did such as stroll along a Cheung Chau lane and suddenly come across the very place where Shawn Yue's character glimpsed Gillian Chung's walking along with an umbrella in her hand or feel that we had successfully located the place where Shawn Yue's character hailed a sampan to go in pursuit after another that Gillian Chung's had boarded and was taking her back to the local nunnery where she made her home.

As it so happens, some movie locations were easy enough to locate -- notably the Pak Tai Temple outside which Shawn Yue and Anthony Wong Chau San's characters had their fateful duel (which also happens to be the very local landmark on whose plaza the Cheung Chau Bun Festival's Bun Tower Scrambling Competition takes place).

However, it took quite a bit of effort for us to locate the cinema building whose cinema was already no longer in operation even at the time that Just One Look was filmed. (Indeed, back in 2002, there were reports of Cheung Chau residents being quite excited when the building was repainted and such as they thought that the island would have a cinema again -- only for their hopes to sadly get dashed.)

Even some eight years after the movie's release though, the structure remains easily recognizable to those of us who are fans of the film... which makes it all the more painful, really, to go up close and realize that the structure is not much more than a shell these days, with even parts of the building that had been revamped for the film now being in a major state of disrepair.

Still, we'll always have Just One Look -- and the warm feelings that movie engendered... even for those of us who hail from territories hundreds, if not thousands, of miles away from Cheung Chau -- some of whom have never set foot on the island, yet have good vibes about it courtesy of what we saw of it on celluloid or home video and the magic of the movies in general and power in cinema as a whole.

I am one of those people who wanders aimlessly. I was at that temple w/o making the connection, or knowing the name of the place.

I *was* hit up for a donation on my way out of the place!

It was Christmas Day, actually.

P.S., I know you're not a Facebook person but my profile picture for quite some time was a shot of me in front of the temple next to one of the lions.

Thanks for the pics, YTSL! Hard to believe the theater looks so decrepit in less than 10 years time.

Anyway, now I've got a craving to see Just One Look again, and also to make a pilgrimage to Cheng Chau on my next trip (still haven't been there yet).

Cool photos. I like poking around buildings that are falling into disrepair. Second best is seeing the photos someone else takes in and around a ruins. :)

Great post! Thank you for the pics. I forgot ALL about Just One Look. Like Dave, I may have to go re-watch it. Thanks again. So cool.

Wow, that was a fun day. I remember how hot it was, how we looked and looked for the theater, and in a lane three women sitting outside on chairs indicated they knew the theater but it was "no more" and then they kind of waved us in the direction of the place. I so enjoyed coming upon the different scene locations too. I watch the movie every year too.

So... did you realize before you visited Cheung Chau that it was the island of "Just One Look"? As for being hit up for donations: I've never had that problem at any temple anywhere in the world...!

It is amazing how fast things can disintegrate here... and mould can grow. :S

On a brighter note: yes, I do think you should visit Cheung Chau some time soon -- and if you have the opportunity, on a non weekend or public holiday when it'd be considerably less crowded.

Cool! And do feel free to poke around this blog -- particularly certain hiking photo-essays -- for more pictures of buildings that have fallen into disrepair/have been abandoned, etc.! ;b

Glad you liked the post -- and yeah, I think "Just One Look" is always worth additional viewings. :)

It was hot last Sunday too -- but nowhere as hot as the day we were there. Something really cool that I've discovered on sale in Cheung Chau: sticks of frozen fruit... Sooooo refreshing on a hot day! :b

What a sorry sight of the once 'glamoured' cinema! There are many such abandoned cinemas few years back in KL too, but now most of them were either torn down for new developments or rebuilt into mini shopping malls with cineplex/mini-theaters.

Yeah, it's sad about the old cinema . . . the advent of VCRs in the 1980s sent the place into terminal decline.
You are right, when the place got painted and tarted up in 2002 there was discussion over the yam cha about the place being granted a new lease of life. I think the owner(s) approached the government for financial support, which came to nought.

Anyway, I must now seek out that film Just One Look even though it has The Twins and was financed by the unsavoury Albert Yeung.

At least KL still has the Coliseum, right?

And FYI, here's a link to a photo-essay of mine from February 2007(!) of Penang cinemas past along with present...

Re the movie: forgive the Albert Yeung connection and stupid poster/DVD cover -- it really is a sweet gem of a movie... one that harks back to more innocent days (and I don't just mean pre-Edison Chen Gillian either). Hope you will check it out -- and love it too. :)

Lovely post YTSL, I've been past here while wandering around this wonderful island, and the film is equally wonderful!

Sounds like you've had a really cool experience that I now regularly have (but still appreciate and don't think I'll ever get blase about): watching a Hong Kong movie and spotting locations that you're familiar with BEFORE watching the movie! :b