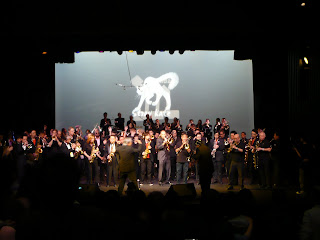 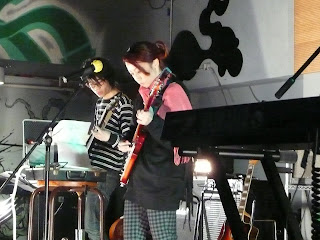 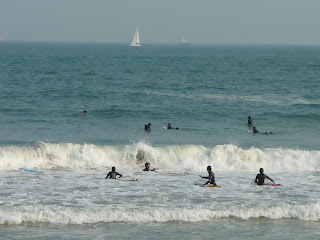 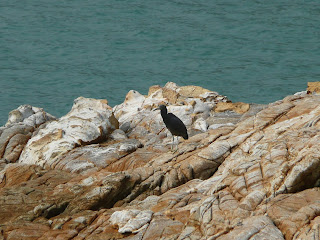 When I first saw what this week's Photo Hunt theme was, my reaction was "Sure I see a lot of black here in Hong Kong -- a place where most people have naturally black hair and also are into wearing black clothing -- but wouldn't black just make for boring empty space in photographs?"

But as I hunted through my now pretty sizable photo archive, I got to realizing that that's not the case -- especially if I don't limit myself to looking for photos that are entirely or even majority black! Indeed, what I thought would be one of the more difficult themes assigned by tnchick actually turned out to be one for which I found several pictorial candidates to put up on the blog and share (and so much so that I had to control myself and confine my photographic offerings to only the following four rather than way more).

So, from top to bottom, here are photos taken:-

1) At the celebratory end of the wonderful 2009 edition of the City Festival's Big Band Fest during which all five largel black-clad big bands (Tokyo's The Monday Night Jazz Orchestra along with Hong Kong's The Saturday Night Jazz Orchestra, Basic Notes Jazz Big Band, The Stray Katz Big Band and Lando Bernal's Big Broad Band) performed together and got the place really bopping!

2) At one woman band The Pancakes (that's her playing the guitar, dressed mainly in black, in the foreground)'s 10th Anniversary Happy Together gig early this year

3) Of surfers in black wet suits waiting for the next big wave at Hong Kong Island's Big Wave Bay (There's another Big Wave Bay out on the Sai Kung Peninsula -- only it's better known by its Cantonese name (same meaning though!) of Tai Long Wan)

4) Of one of some 500 species of birds found in Hong Kong, a place that -- as unlikely as it may seem -- is a haven for bird watchers and possesses such dedicated organizations as the Hong Kong Birdwatching Society (And should anyone wonder, actually, I'm more of a culture vulture than a birdwatcher but I've come across my share of birdwatchers and birds while hiking in Hong Kong and definitely found things to admire about them! ;b )

wonderful takes on the theme!!

You did a great job with this theme. I liked all the shots and as a bird lover I enjoyed your including a bird shot. I hope you have a great weekend.

I was like you YTSL, I fixated on the black and found one to fit but if you look in your archives there is lots of black.

I was rather lost at first with this theme... You did wonderfully, great choices, indeed not boring black at all. I see many surfers in black suits here too, forgot about them. Birdwatching is a pending subject of mine, it souns so interesting.

great choices, i like your interpretation for the theme. it was hard for me this week.

If as a bird lover you ever can identify the birds whose photos I put up, do please do so. :)

I don't know birds that well but know that's not a black crow -- so you're in the clear there! :)

True enough re there being a lot of black about in my photo archive! :)

It'd have been funny if we -- living thousands of miles apart -- had both put up photos of black wet-suited surfers. But I like your surfer-less Photo Hunt submission for this week too. :)

Thanks and don't worry, you did good this week. :)

yes, black is anywhere you can find them.

I had some difficulties to find something black, it's not my favourite color, but you found nice once !

They're all nice shots, but I especially enjoyed the photo of the bird.

Here's my take on black.

Nice photos. I live the bird and the surfers. Happy weekend

Thanks -- including for thinking my humble blog entry's worth describing as an article! :)

Black's not my colour of choice either -- but must say that seeing so much of it about in Hong Kong is making me like it more. ;b

Glad you like the bird shot. Was hesitant to put up it up because it had so little black in it compared to others but... ;b

Great selection for the theme! I especially like the contrast between the black bird and the landscape of the last shot. Happy photo hunting and thanks for the visit :)

A most interesting variety of black subjects - indoors and outside! Great shots!

A great collection. You are right, this theme was more open than I first thought too.

Love that black graphic behind the dressed-in-black guitar player.

Nice selection of black. I like the variety of what you choose to post this week. I always love to see women playing guitars. And the surfers! I didn't realize there were places to surf in Hong Kong.

Great collection showcasing the them black. I would have love to hear all those jazz bands!

My black is posted here

Nice set of shots to show us black. I knew as soon as I saw the theme who was going to be on my blog. I'm so predictable.

You covered it well with those photos. Enjoy your weekend.

Thanks -- and the bird photo does seem quite popular among Photo Hunters. I'm glad I put it up now! :)

As the proverbial "they" say, variety is the spice of life after all! :b

Woah, you really checked out that photo. Thanks for doing so! :)

Yes, there are indeed places to surf in Hong Kong. And some of the surfers are reckless enough to want to surf during typhoons to boot! :O

A couple of those jazz bands (the Saturday Night Jazz Orchestra and Stray Katz) play monthly. So if you ever come over to Hong Kong, you should see if it's that time of the month when they're playing a gig... :)

Predictable you may be but you still put up a very nice photo all the same. :)

Oooo, my daughter is going to Hong Kong this summer for a short-term mission trip. I love the photo with everyone swimming (I'm a beach lover).

I just love the surfers, they look so like little ants coming out of the vast ocean! When I looked at the full size version, what I thought were two yachts, turn out to be one yacht and something that looks almost like an oil rig. Is it?

How true that there really are tons of black out there!

i dont know why but i kinda lost my creativity n knack of spinning the theme... thought of addiction last week n black this week n came up with no ideas

Are you going to visit your daughter in Hong Kong then? In any case, bear in mind that Hong Kong had quite a few nice (public) beaches -- and scattered in various parts of the territory. :)

You're right in that it's a yacht and something else. To be honest, I can't remember what it was -- but I figure it's less an oil rig and more something like a repair ship?

Black is everywhere -- or so it can seem! ;b

Oh dear re your loss of creativity, etc. for Photo Hunting. Maybe because you've been doing so much -- and seemingly different from your regular scheduled activities. Hope you get your creativity and enthusiasm for the meme back some time soon -- and let me know when you do!

These are fantastic choices for the theme!

I'm up to! Would love to have you come on over for a visit.

Great photos, what is the name of the bird, I know you said you rather watch culture than birds, but that seems to be a big bird.

excellent take! i like the blacks you presented. i would have never thought of them for this theme.:p

Thanks and I just came back to my blog post visiting yours! :b

Sorry, I have to plead ignorance with regards to the name of the bird -- am hoping that by posting a picture of that bird that someone will come and ID it for me! ;S

That's the joy of Photo Hunt, right? To see the varied ways in which a single theme can be interpreted! :)