Before anything else: thanks to those who let me know in the comments thread on my previous Hwaseong Fortress photo-essay entry that they'd be interested in seeing more of the photographs that I took while walking along the walls of that magnificent edifice. And, of course, I'm happy to oblige.

So, without further ado, here is one more series of shots of the restored 18th century fortress built by King Jeongjo to help honor and protect the remains of his ill-fated father, a prince effectively murdered by being condemned to spend the rest of his days in a rice chest by his paranoid father... 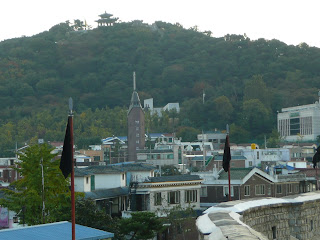 Remember the Seojangdae (West Command Post)
in the previous photo-essay? To get a sense of
the distance covered, there it is up on a hill
near where we begin this second photo-essay... 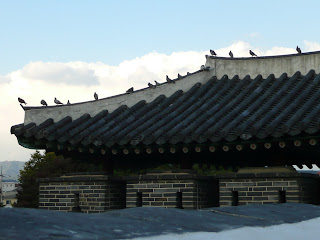 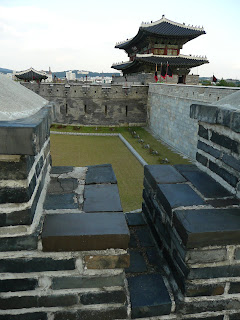 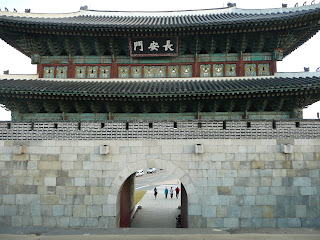 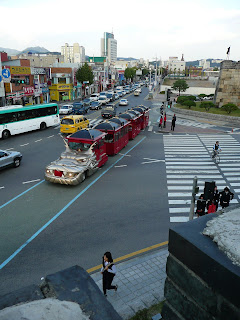 Those who want to see Hwaseong Fortress
but not by foot can make use of
the "dragon train"sightseeing trolley ;) 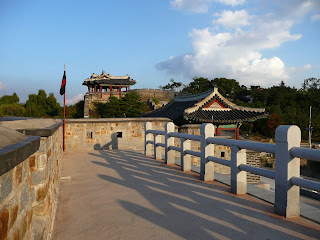 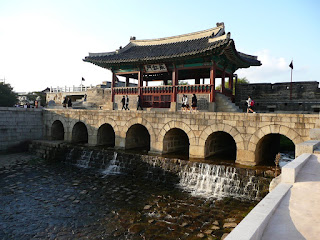 The Hwahongmun water gate
is built over the Suwoncheon stream 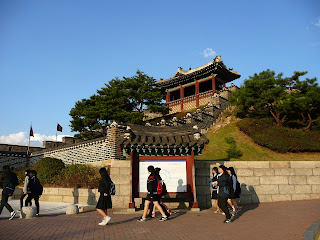 At one point during my Hwaseong Fortress wall walk,
I crossed paths with a large group of
Korean school students who looked very happy
to have been let out for the day ;)

And for those keeping tabs: I'm concluding this photo-essay with about one-third of my walk along Hwaseong Fortress' walls to go... ;)
Posted by YTSL at 10:22 PM

The Water Gate is lovely. Do you happen to know if the maze like brickwork symbolizes anything or is it purely decorative? It looks like it might have been a lot of painstaking work.

Thanks for including the dragon's tail touring vehicle. Pictures of strange automobiles are fun.

Agree that the Water Gate lovely. But sorry, am not sure what you mean about the maze-like brickwork.

And the vehicle is more dragon-headed than -tailed. But, yeah, agree that pictures of such are fun. ;)

Agree,the dragon head is very cool. It would be great as a hood of a car.

Teeheehee at your dragon head-car hood suggestion! And am glad you're looking forward to more photos... Soon, soon! :b

These are facinating pictures. I find the buildings very interesting; of course not without your write-up :)

Am happy that the photos fascinate, particularly with the help of my write-up. :)