I decided to spend the first full day of my Korean vacation in Suwon. The UNESCO world heritage-listed Hwaseong Fortress was one of three places I most wanted to visit in Korea, never mind Gyeonggi-do's provincial capital. The thing though is that I knew that what has been described as like a mini Korean version of the Great Wall of China wouldn't be a place that my mother -- who was meeting up with me in Seoul -- would be able to deal with.

So, instead of missing out on checking out the formidable fortress or endangering my mother's health while on holiday, I went for the third option of scaling the walls of Hwaseong Fortress when she was still not in the country. And boy, was I ever so glad I did -- because the experience of walking on those walls is really excellent; both for the sense of history that it gives one and, also, for the scenic views that are to be had along most, if not all, of the way.

All told, I ended up taking more than 60 photographs of and while walking along the late 18th century edifice's walls. The following are the first eight of them that I wish to share. I hope that they -- and at least one other set of eight to come -- can give a sense of the diversity of landscapes around the walls along with their general beauty:- 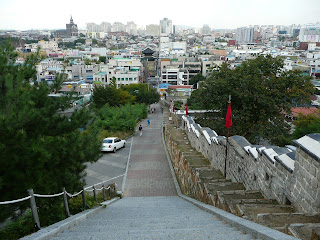 This was the first stretch of Hwaseong Fortress wall
that I walked on -- see why I didn't think this
would do for my mom (especially post heart surgery)?! 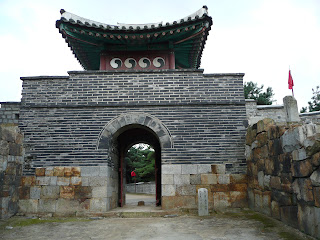 If you make it up those steps though,
you'll be met by such as the
Seonam Ammun (the Southwest Secret Gate) 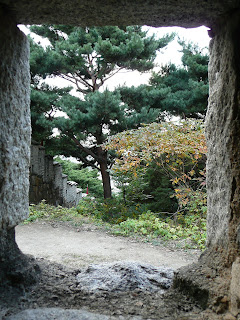 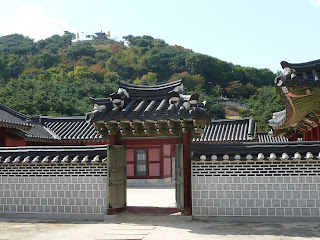 Earlier in the day, while visiting Hwageong Palace,
I had seen an intriguing structure
nestled high up on a nearby hill 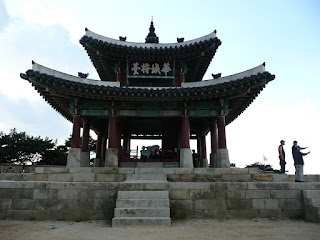 Here it is up close -- and for the record,
it's Hwaseong Fortress' Seojangdae
(The West Command Post)! 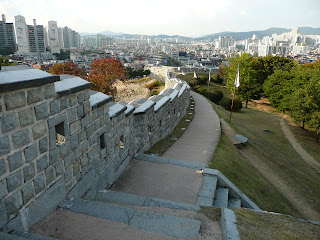 The walls of Hwaseong Fortress used to
encircle Suwon town but no longer (as can be seen
by many buildings, including high rise ones,
now being located beyond it) 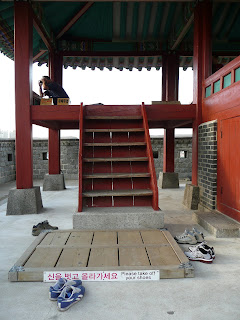 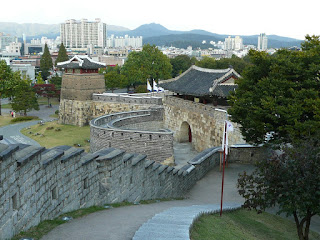 Get to the Hwaseomun (west gate of the fortress)
from the Paldamun (south gate) and it means
that your journey along the walls of the fortress
is one third completed :)

So... should I keep on going with my photo sharing? Hope your thinking is along the lines of "yes, please!" :b

I think you should stop posting photos from Korea--once you have posted every one that you have. ;-}

Very taken with the ones showing the skyline/urban landscape with the beautiful curving wall and road in the foreground.

One question--how high up (how many steps or flights of steps) is the walkway along the wall?

From the sixth photo from the top it looks like there are very organized and well tended gardens on both sides of the that part of the wall although each side seems to have a very different look or personality.

I totally agree with ewaffle:

"I think you should stop posting photos from Korea--once you have posted every one that you have. ;-}"

Heheheh -- I can't (and won't) post EVERY photo I've taken from Korea! But thanks for your enthusiasm -- and encouraging me to share more of my Korean photos. :)

Also, to ewaffle: the height of the walkway varies as the 5.6 kilometer wall goes up and down hills and undulates along flatter sections of land. Also, yes, there are well tended, etc. areas on both sides of the wall for the most part -- but in some sections, what can be found too are more "urban" areas directly on at least one side of it.

How come I don't see much of Seoul like you do? It's too stressful for me, walking and subway and walking and walking and subway. The subway is so huge 4 floors and from one end to the other feels like 2km long. Plus everyday eating kimchi got food poisoning. So vomiting and diarrhea and have to go hospital for IV drip. So had to rest in the hotel for 2 days. And postponed my trip to come back earlier. No more Korean food for a while, hahahaa....

Are you referring to the Hwaseong Fortress? If so... well, you didn't see it because it's not in Seoul! :D

Also, oh dear, it doesn't sound like Korea agreed with you at all! My mother would definitely agree with you about the subways requiring too much walking. But she and I loved the food and had no problems with it at all!!!

All in all, you sound like you had a nightmare Korean visit! Hope you've recovered now... :S