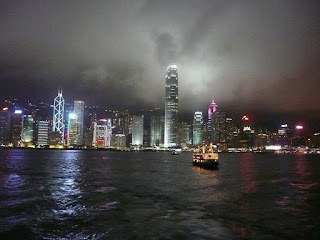 Wong Jing's latest movie is set in an unnamed city in the future
but its futuristic landscape includes at least one building
that resembles one in the above photo
Better late than never? I viewed Hong Kong cinema's master schlockmeister's most recent offering close to two weeks ago and since then, it's left most, if not all, Hong Kong theaters. But it's only now -- rather perversely, post viewing the far bigger budget Iron Man 2 earlier this evening -- that I am in the mood to add my two cents worth of comments to those that already have been posted in print and on the internet by others. Still, since there apparently are people -- you know who you are! -- out there interested in reading my thoughts on film and movies...

Will they ever learn? And no, I don't so much mean the characters in this movie that begins in 2080 before jumping back a few decades to a time that's still several years ahead of 2010 but, rather, those Hong Kong filmmakers who try to: a) take on -- or is it just imitate -- Hollywood in genres at which the American behemoth excels (i.e., special effects laden science fiction actioners); b) pander to Mainland Chinese audiences; c) internationalize their products; and d) all of these.

With regards to the first point: let's face it -- when it comes to special effects, those with a bigger budget almost invariably do better. And this especially so when the special effects in question involve computer graphics rather than something more manual like, say, wire fu.

Still, even while I've seen more impressive futuristic landscapes rendered in Sim City art, I actually wouldn't go far as to state that those that can be seen in this work are entirely bad. Also, it's not the special effects that makes the movie about a heroic policeman willing to become a cyborg as well as go back in time to prevent the villains from retroactively changing the future by killing an influential scientist such a generally laughable affair but, rather, a script ("credited" to Wong Jing) that seemed to send out strong signals that the offering as a whole is not meant to be taken seriously or was genuinely written for people with childish mentalities and/or super low IQs in mind because logic often just gets thrown out of the general equation.

For example, in the first set piece battle of the film, a super weapon gets rolled out by the good guys only after several of their colleagues are unnecessarily killed and ancient treasures destroyed. Presumably, this is so that the movie's audience can get shown the villains' eye-catchingly destructive abilities. But this gets achieved at the expense of making the good guys (notably their commander, played by Andy Lau) look pretty stupid as well as not sufficiently caring about people and things like should be the case.

On a non-action note: the film's characters are ridiculously one-dimensional and tend to interact with one another in ways that often feel tonally inappropriate -- particularly in the case of those of adult age. Indeed, maybe one reason why the child characters (notably Xu Jiao and the boy whose part initially seems rather throw away but actually increases in significance as the story develops) seem to come off better in the movie is because they conduct themselves in ways more appropriate to their age whereas the adults often come across as so emotionally immature as to be psychologically stunted.

Yet, for all of its undeniable problem areas and weaknesses, I actually don't hate the work or feel angered by it in a way that signals that a movie is truly bad to me. For this, I will primarily credit the effort's two main actors (Andy Lau -- whose presence in this movie causes me to seriously wonder what Wong Jing has on him! -- and Fan Siu Wong) and actresses (Xu Jiao and Barbie Hsu) -- all four of whom come across as genuinely trying to do their best (with what they had been given to work with) even if the offering's director-scriptwriter was not. Also, pathetic as it may seem, there is something really fun about seeing Andy Lau as something akin to a transformer robot! ;b

What a fun review.... Thanks. Makes me almost want to see Future X-Cops"!

Talented actors trying to create something from nothing while the cameras are rolling; dumb plot point, the super-weapon deployed only after the good guys have been decimated even though it was available; trying to be all things to all people--or at least all paying audiences; not much control over or interest in the actual process of making the film.

One thing that he can do is actually get films made and released, giving work to Hong Kong based actors and technicians--faint praise indeed for a director/producer/writer/actor.

It sounds like a throwback to the 80's in a lot of ways - esp. with Andy Lau taking on any role he could get his hands on. The good old days when Andy appeared in 20 movies a year!

Eeeeek! The review wasn't meant to get people interested in watching the movie (but, instead, just to understand why I don't hate it!)! ;D

Sounds like you giving Wong Jing some (faint) praise there. The thing is that I honestly believe he's capable of, and made, way better films -- including, as a director, "Boys Are Easy" and, as a producer, "Naked Killer", "My Father is a Hero" and "The Way We Are".

I know what you mean -- in terms of Wong Jing being able to get so many stars to appear in a single movie. But considering that Andy Lau doesn't appear in that many movies a year any more (in that regard, such as Simon Yam has overtaken him), it truly is amazing that Wong Jing got him to star in this work!

Sounds like you giving Wong Jing some (faint) praise there.

I was (or was trying to "damn with faint praise", which I should have made more clear. When the best that can be said about a filmmaker of Wong's talent, experience and connections is that he can still get a film in on time and get it on the screen that isn't much.

He might be a bit like the legendary Roger Corman although with more money and possibly a little less hubris.

Eeeeek! The review wasn't meant to get people interested in watching the movie

Your reviews are more powerful than you realized--even one in which you pan most of the movie makes your readers want to see it. I join sbk in thinking "that sounds pretty good--I might want to pick it up."
;~>

Ok I'll admit to wanting to watch this film after reading your review!!! And it was different to see a sober review where the reviewer didn't make non stop jokes on how silly the whole thing was (don't get me wrong I love those reviews and often laugh out loud but reading yours made me welcome the change :) )

I really don't like Andy Lau. There is something about him that turns me off and do not really seek his performances - but he has huge clout in the industry and the majority likes him well enough.

I like Wong Jing's Colour of Truth (starring Anthony Wong)

Actually, I like that you observed and appreciate that he helps give work to many other film folks. But, sometimes, when you remember that he's the son of Wong Tin Lam (among other things)... Still, I have to say that meeting him -- in the company of his sister -- at a movie premiere a few months back has got me seeing him in a different and more positive light...

And yes, I guess my reviews are more powerful than I realise -- and seem to achieve different results from what I intended to! :DDD

Thanks for your comments -- the first paragraph of which I'll definitely take as compliments. :)

I like those 5 Andy Lau films too, but how about "Days of Being Wild", "Running Out of Time" and "Infernal Affairs"? By the way, I think that while Wong Jing is a terribly inconsistent filmmaker, when he is in good form, he does make some really entertaining commercial films.

"Days of Being Wild" is far more of a Leslie Cheung movie than Andy Lau film for me. I don't like "Running Out of Time" as much as some folks. And "Infernal Affairs" is another of those films I like more for other actors' performances than Andy's.

But, yes, agreed re your assessment of Wong Jing as a filmmaker. He's not always bad for sure. But looking at his record, I think he's a better producer than director.