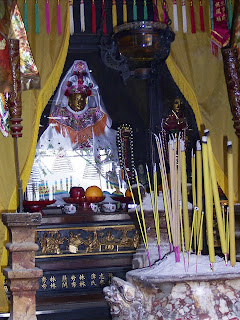 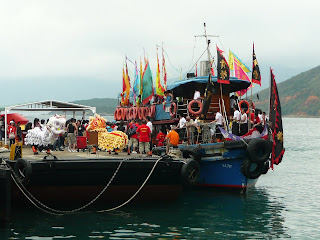 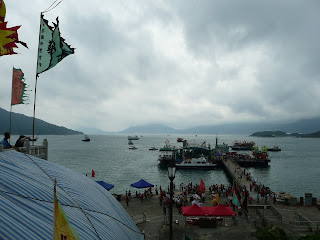 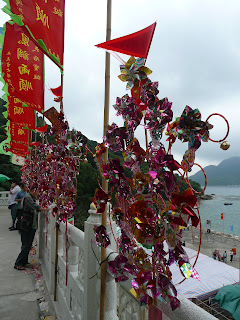 This week's Photo Hunt theme looks to have been planned to coincide with this weekend's Mother's Day commemoration in many -- but not all -- parts of the world. But like tnchick, certain other events in my area have inspired me to opt for a less conventional approach to the theme than I am thinking many others will take.

In my case, it's not so much natural disaster than a festive commemoration of a legend: that is, the birthday of a female deity variously known, among other things, as Mother Ancestor along with Heavenly Queen. In Hong Kong, she's known as Tin Hau; in Macau, A-Ma -- and yes, Macau actually derived its name from the goddess who is particularly popular with seafarers and fishing communities as far afield as Vietnam, Thailand and Malaysia (and has temples dedicated to her even in Australia and the United States of America).

I blogged about my visit to Joss House Bay on Tin Hau's Birthday in the post preceding this one. But I took so many photos this past Thursday that I wanted to share more of them on this blog. At the same time, because Hong Kong's Chinese Temples Committee forbids photography inside of the temples it administers (including the 13th century Tin Hau Temple in Joss House Bay) by non authorized personnel, here's first putting up a photo of an effigy of the deity from Macau's A-Ma Temple (where no such photographic restrictions are in abeyance) -- taken, coincidentally, four Tin Hau/A-Ma birthday celebrations back in 2006!

Always something different and interesting here. Most of us went the traditional route but I think this is more interesting.

Very interesting and what a celebration!!

Happy Mother's Day weekend to you!! My PH.

What a truly fascinating post. THanks for sharing. Happy weekend

I'm glad you find my posts interesting as well as different. And yeah, well... must admit that I do like trying to go the less conventional route! ;b

Thanks and happy hunting to you too. :)

The celebration was actually more low key than I expected but I think the location's really lovely! :)

You continue to amaze me with your knowledge and wonderful shares on your blog.

Here is my collage for the theme...my mom, me and my daughter. HERE

Very interesting! I enjoyed the photos too, but the information on the celebration was much appreciated because I have learned something new :)

I love visiting your blog because your photos are always so colorful and I learn a lot. Thanks for visisting!

This was such an interesting post and wonderful photographs too. I always enjoy seeing your interpretations of the theme. Happy weekend.

That's one unique posting on Mother. I wonder if she's related to the recent one I attended on 29 April 2010.

Welcome back! Haven't seen comments from you on my blog in a while. :)

I know people say that "a picture says a thousand words" but sometimes, some accompanying explanation is good, right? ;b

I can't promise that my photos are always colorful but have to say that I do make an effort to inform. :)

Thanks, as usual, for taking time to read as well as look. :)

You mean the event? Might be -- was it at a Tin Hau temple in Penang??

i like your different take on the theme. nice shots too, very colourful and appealing.

btw, my mom and i don't usually go on overseas trips together. my parents prefer joining a group tour whereas my hubby and i prefer travelling independently. :)

Love the bright colors of the festivities. Nice pics and an excellent angle on this week's theme.

quite a different take but still shows that giving special attention to mothers is not a recent event...

Thanks for your comments re my entry -- and in response to my comments on yours! :)

Hope you (and others) checked out my other entry related to this festival (that also has photos from Thursday) then... ;b

Thanks! (BTW, are you Photo Hunting? If so, please tell me on which of your many blogs your entry is!)

Yes... and it's interesting in that I'm not sure that Lim Bek Niu (the woman who would become Tin Hau, A-Ma, etc.) actually married and had kids herself but yet one of her designations is "Mother" along with "Goddess".

It's always nice to learn about other cultures !

I am always fascinated by your posts. I learn so much. I grew up with many Asian friends but never learned much about the Chinese culture beyond food. Next time I am in San Francisco, I want to look for the temple.

Got excited for a moment when I saw the title of this post. Thought it was a review of the Korean film Mother (from my favourite Korean director Bong Joon-Ho)... : )

Thanks for the introduction to the Mother Ancestor - love that shrine in the first photo!

Hope you had a great weekend; I'm a little late visiting because I was spending the weekend with my mom.

Thanks for appreciating my post(s). It makes me... very appreciative! ;b

More seriously, I'd like to encourage you to explore other cultures via your friends. From personal experience, I find that this can be very interesting and helpful. :)

Hope you had a great time with your mother this weekend. :)

What wonderful pictures and a very informative post. I've never seen this particular female deity, but I'll be keeping my eyes open.