In Cheung Chau five days before the Bun Festival 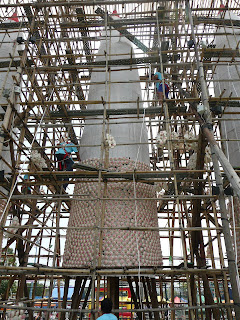 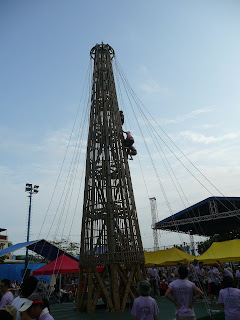 ...while nearby, other folks test their
bun tower climbing prowess as part
of this year's Bun Tower Climbing Fun Day 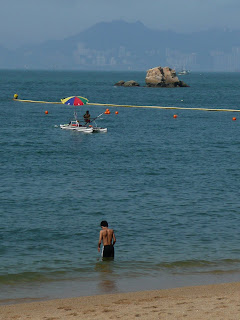 ...and still others (including my mother and I)
opt to spend time relaxing at the beach
(And if you're wondering -- yes, that is indeed
Hong Kong Island in the distance!)
"Hong Kong. A world of celebrations." Thus goes the slogan of the Hong Kong Tourism Board's Festive Hong Kong 2010 publicity campaign. And while some of its vaunted "key festivals and events" can seem on the lame -- or, minimally labored -- side (cf., Wine and Dine Month), it's also true enough that Hong Kongers really do celebrate quite a number of traditional Chinese festivals in some style.

As regular visitors of this blog know, Tin Hau's Birthday was celebrated just two Thursdays ago. And while today was not a traditional festival day, this coming Friday will see the celebration of not one but three festive occasions: i.e., Buddha's Birthday, Tam Kung's Birthday and the Cheung Chau Bun Festival; with the third tending to be celebrated in the most spectacular way of the three -- and its celebrations attendantly tending to attract the largest crowds in Hong Kong that day.

Because of its infamously large crowds, I thus far have been content to just view visuals of the Cheung Chau Bun Festival via video clips shown in movies like My Life as Mcdull (2001) or that are on exhibit over at the Hong Kong Heritage Museum. But while I probably will forego attending the festival proper again this year, I did go ahead and take my mother -- here visiting once again -- over to the dumbbell-shaped island to check out a Climbing Carnival taking place today as well as other of the island's attractions.

As it turned out, one highlight of our day spent on the island I will always associate with the sublime Just One Look (2002) was seeing people preparing for Friday's festival by doing such as assembling the bun tower but also baking the thousands of buns to be attached to the bun tower in small bakeries scattered around town. Another high point was the blue skies that opened up over the island for a large part of the day -- and were such a contrast to the misty (or was it just plain polluted?) skies that we saw on Hong Kong Island before we headed over to Cheung Chau and again upon our return there.

Additionally, weather-wise, while today was the hottest it's been in a while, the beauty of being on Cheung Chau is that for much of the time that we were there, we found ourselves being cooled by lovely sea breezes -- so much so that I can't help but sigh with happiness once more at the memory of them and the day out as a whole! :)

I've seen photos of the bun tower during the festival but never one of it's being bunned...cool photo.

hehehe.....so did you climb to the top of the tower?

I know you treasure days with blue sky but to me it's the color of the ocean that I find beautiful as we have blue sky but no ocean.

Sorry to disappoint you but that climb looked too daunting to undertake -- especially in front of hundreds of spectators!

Re the ocean: the sea water in Hong Kong can be a really beautiful color that I appreciate too. And the sea off Cheung Chau yesterday was so nice -- clear and actually clean looking -- that I finally was tempted to dip my toes and feet into Hong Kong sea water! :D

Looking at the tower they are building... it will certainly be a magnificient sight when people are clibing up the tower! Are you going to be there to shoot more pics??

Alas, Friday will be a public holiday but, unlike many people, I have to work on most public holidays -- so, alas, no, won't be there to shoot more pics. ;(