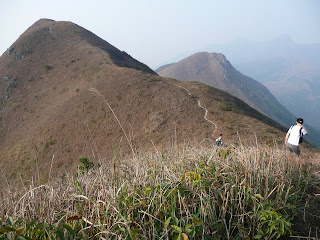 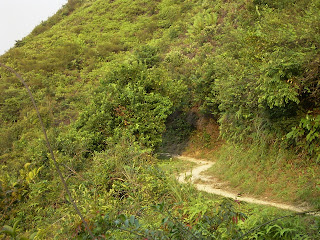 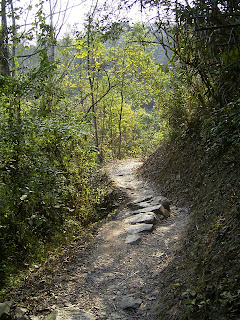 Before anything else, my apologies for this Photo Hunt entry being later than usual. And here's going ahead and apologizing in advance for going to be later than usual to visit others this time around (although, once again, I promise that I will do so eventually, even if not in the next 24 hours!). The short story is that there are problems with my apartment, so: a) I've been out apartment hunting for the greater part of today; and b) my building's electricity will be temporarily (i.e., for only a few hours, I trust!) cut tomorrow... :S

Anyways, to the photos -- that hopefully show not only how hilly, green and natural still much of Hong Kong is but, also, how many of the paths on which I hike through the Hong Kong countryside tend to twist and turn. As it turns out, they are all from different hikes in different parts of the territory: with the top-most picture being taken in the New Territories (specifically, the section of Ma On Shan Country Park where I found myself genuinely fearing for my life!); the middle snap having been taken on my walk from Tung Chung to Tai O over on Lantau Island; and bottom shot having been taken in Tai Tam Country Park, near the Tai Tam reservoirs, over here on Hong Kong Island.
All of which serves to remind me that it's been a while since I went hiking in Hong Kong, a state of affairs I hope to remedy after I successfully move apartments within the next few weeks! ;)

Those are great twisty paths.

That top photo reminds me of the hiking trails we took on the top of the Colorado Rockies. I LOVE the mountains.

I never ever think of Hong Kong having a countryside. It is beautiful there; these are sights I can relate to. Very interesting post.

I love mountains but have to admit that the top photo's mountains -- and they are mountains, rather than hills, aren't they? -- were on the too scary side for me... ;S

Like I've been trying to point out from time to time on this blog: Yes, Hong Kong really does have quite the beautiful countryside... :)

Those are beautiful shots. Perfect for the theme.

Beautiful twisty paths! The top one is wonderful, great perspective.

These are most excellent photos for this theme YTSL. I did not think it easy. Good luck with your house hunting and the move.

Thanks and yeah, it's really a busy weekend, one which has left me with a bout of insomnia (a topic I once said I'd write more about but haven't until now...) -- I'm so revved up! ;S

Glad you think so. Was wondering whether they really were twisty enough for the Photo Hunt!

Thanks -- and more than BTW re the top photo: that was one of the last I took on my "hike from hell" before I got so scared I stopped taking photos! ;S

Naturey I knew, beautiful it's nice to find you and other Photo Hunters commenting on! :b

Have got the hunting part finished, I hope. Thanks re the moving good wishes. I'll need it since I find that moving can be rather traumatizing! ;S

Great twisting paths, and lovely scenery. Wishing you all the best with your move.

Hi. I found an article related to Japan in your site.
I want to often visit your site from now on.
Do you like Japanese Culture (Foods and fashion and manga...)?
If you are interested in Japan, please link to my site
My site has information about Japanese culture
(For example, Japanese health food, animation, games).
Would you introduce information（URL）in your site if you like it?
http://japanesefood-cultuer-history-anime.blogspot.com/

Thanks -- for the photo compliments and move good wishes! :)

Yes, I like Japanese food (and films) but not less so fashion -- I just am not into fashion in general -- and manga. Also, I'm afraid that I can't read much of what you wrote on your blog. (What language is it in?) For this reason, don't think that it's ideal for us to have a link exchange. So I appreciate the suggestion but it's a no at least for now.