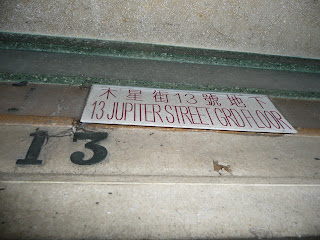 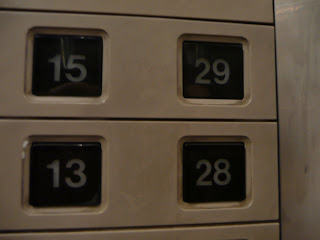 The proverbial 'they' say that a picture says a thousand words but the two pictures -- one a close up of a building address; the other a close-up of a quartet of elevator buttons -- that I took this morning especially for this Thirteen (13) Photo Hunt entry don't say much that's interesting by themselves. But, hopefully, when I explain that over here in Hong Kong, 13 is not considered an unlucky number -- or, at least, much less so than 4, 14 or 24 -- then they might take on more meaning.

For those who don't know, Chinese dialects -- be they Cantonese (the primary language of Hong Kong), Mandarin (which people in America tend to think of as being the only Chinese language there is), Hokkien (my mother tongue), etc. -- are tonal in nature. What this means is that changes in tone make for different words and changes in meanings. In the case of the number 4, when uttered with a different tone, the word for it turns into "die/death", with 14 sounding like "certain death/definitely die" and 24 sounding like "easily die/easy death"!

Consequently, you will often find people trying to skip those numbers; with the result being that even while there are addresses -- like in my first photo -- that are marked by a 13 on them, it is so -- and now take a second look at the second photo in this entry... -- that some buildings here are officially without a 4th, 14th or 24th floor (even while still having a 13th floor)! And yes, if you're into calculating, what this means is that the 29th floor on the latter building actually is the 26th since 4, 14 and 24 are missing from it... ;b

Great post YTSL. I love that the buildings have no 4 or 14th floor.

You can therefore imagine the other numbers on my house. A big issue here where we have so many Chinese, so a Chinese person will never buy my house which eliminates one third of the buyers!
Have a great weekend YTSL

I know a lot of folks who find 13 unlucky... as for me, I don't believe in luck. And... 13 is one of my "fave" numbers =) Great job on the theme this week. My PhotoHunt will auto-publish in just under 2 hours. =) Just visiting a few while I have the extra moment =)

Thanks for the explanation, that was very interesting ! I didn't know the meaning of these nr. Of course I knew that you have different languages. A chinese friend told me that mandarin is the official language ?

I didn't know that 13 is not considered unlucky in HK. Great 13 entry!

Glad you enjoyed reading my explanation. And haha re comments about your house. Funnily enough, my family is ethnic Chinese but we've never thought much with our house number being 4. It's only since coming to Hong Kong that I realize how strongly some people really do feel about it! :)

13 is one of your fave numbers? No wonder you chose it for a Photo Hunt theme then! ;b

13 is considered unlucky by some in Hong Kong but I think that's more the case for those who are Western influenced/English educated -- who are the minority over here. :)

This is so good for the week's theme...you did well.

My photo hunt also has a gift for you at the 'end' of my entry. If you haven't stopped by by now...come over and pick up your prize.

In the Philippines, mostly they skip the #13 on buildings. It's the 14th already after the 12th floor. There's only one number they skip. In HK, there are 3 numbers! Thanks for explaining the reason.

Great ideas for this weeks theme. Thanks for letting us know about the Chinese dialect in regards to the numbers 4, 14 and 24. Always in for learning new things.

Have a nice weekend.

That is really interesting, thank you.
Yes, Badger is an old lady now, not always that way. She and her brother were island dogs and ran a bit wild. Raq died a couple of years back and Badger has become a total love.

Fascinating post YTSL. I love learning all these different things.

Yes, you are my 13th commenter - I'm going back now to mention that on my post!

My goodness - i didn't know any of that! Great PhotoHunt entry! :)

Interesting, I believe I haven't seen the number 13 in our elevators here in Manila.

By the way, it was only coincidence that I had that sandcastle picture of me last week when I had my vacation. Thanks for the visit.

Interesting post for the theme. I didn't realize that there were a variety of unlucky and lucky numbers. Good shots and happy weekend.

That's really interesting! Thanks for the lesson! :)

VEry informative post. You're right. Here in Asia the number 13 is still acceptable compared to the number 14 especially to those who's superstitious..

Pearl - have a good weekend

In most of the buildings in KL, they use "3A" for the fourth floor. Haha...

**I am not taking part this week because I can't think of anything to post. Not even a single idea**

Thanks for the appreciation and the prize. You mean I should pick it up and display it?? :b

Be it skipping one or many numbers, I wonder how the floor after the skipped numbers feel... ;b

Thanks for being willing to learn. Enjoy the chance to get out my inner teacher on Photo Hunts... ;b

Sounds like Badger's a much loved as well as old lady. Hope you two have a lot of years and fun together yet. :)

Thanks for the 13th commentator mention on your blog! :)

Glad to be able to play a part in your learning something! :)

You've just confirmed what another Photo Hunter from your part of the world already has said about the lack of 13s in the Philippines! :)

There are people in Hong Kong (notably in the expat population) who do think that 13 is an unlucky number. It's just that they're far outnumbered (no pun intended!) by those who think 4, 14 and 24 are way more unlucky... ;D

Have to confess that the first photo was taken while balancing an umbrella in one hand and getting it to try to keep my camera and me dry. So am really glad you like it! :b

Thanks and happy weekend to you too! :)

Thanks and you have a good weekend too! :)

Wondered whether you were just later than usual... Oh dear re your being bereft of ideas for the Photo Hunt this week! ;S

I knew about the number 4 but I didn't realize elevators are actually without the 4, 14, 24 - isn't it kind of confusing sometimes?

Wow! Talk about confusing! I never knew that 4, 14, and 24 were unlucky in other areas of the world. I couldn't believe I was seeing a number 13 on the elevator pad.

I'm with TNChick, I don't believe in luck, but it's interesting to read about others' superstitions.

Great take on the theme today - nice shots and very interesting information on the numbers!

Now this is a great post. Totally new information and so interesting. Thank you!

The funny thing is that there's a famous film company whose office building has a 14th floor... and guess what floor it's on?! ;b

You're right and I sometimes laugh at the thought. Also, since Hong Kong follows the British system, there's a ground floor before a first floor. But if you're American (or American influenced), that 3rd floor could be a 4th floor, etc., etc., etc... ;D

Yet another Hong Kong superstition I just heard about today -- this one to do with feng shui: It's not good to have a second door in your apartment directly face your front door... ;b

You're very welcome! Thanks for appreciating it all. :)))

Hi YTSL, thanks for dropping by in the first place.

Great shoot you have and I miss my trip to HK during January. Guess what, I'm staying in a hostel at 14th floor in Tsim Sha Tsui...

I know a lot of people feel the number 13 is unlucky, but for me it's a lucky number. Interesting info in your post! Happy hunting!

Interesting that you consider the number 13 to be lucky (not unlucky or even just neutral)! :)