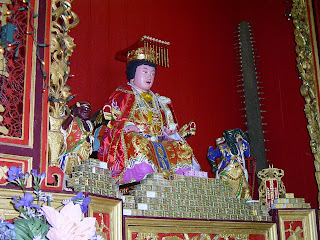 Figure in Penang's Hainanese Temple
of a Hokkien mortal turned goddess
worshipped in predominantly Cantonese Hong Kong
and Macau, among other places!
A new issue of bc magazine appeared in selected Hong Kong establishments (e.g., Starbucks outlets, Cosmos Bookstore, Kubrick (the Broadway Cinematheque's bookstore), several bars and restaurants) yesterday but it's only today that it's available on line. And yes, I wrote my share of the articles and other bits in it, and here are links to them:-

iii) A Scottish Tragedy in Hong Kong -- arts feature on a production of Macbeth here in the Fragrant Harbour;

iv) A Taste of Thai -- my second food feature ever!;

v) Review of Three Kingdoms: Resurrection of the Dragon;

vi) Review of Run Fatboy Run (An English language movie that should not be confused with Sylvia Chang's Run Papa Run!);

vii) Review of Escape from Huang Shi; and

Also, will take the opportunity here to thank Brian for his kind permission in allowing us to make use of his review of Chocolate (and thereby save me a bit of extra work)... :)

Informative and enjoyable article on Thai food. Do you get to check out (eat and be reimbursed) all the restaurants as part of your job?

I am a food junkie too but I tend to not like spicy food. But I love thai food provided it is mild. I love the coconut curries.

One of my fave Thai dishes I can only find at one kind of cheap Thai place here in the Maryland suburbs. It's called Guay Teow Lord. Here's a link.

P.S. Yueh Hua is in Three Kingdoms? Hopefully not fightint Ti Lung a la Jet Li and Jackie in the Forbidden Kingdom flick?

If you don't like spicy, would best recommend that you go with phad thai and the mango sticky rice (which often is billed as dessert but can be a meal in itself for me) then!

I enjoyed reading your reviews of Three Kingdoms and Escape from Huang Shi.

Thanks, appreciate getting positive feedback on my reviews from you! :)