Another four films viewed at this year's HKIFF (3) 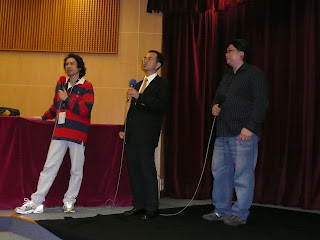 Q&A session after the screening I attended of
All's Right With The World (see below) -- with, from left to right,
HKIFF Programme Manager Bede Cheng,
documentary film director Cheung King Wai
and the social worker he called upon to share the spotlight
Encounters at the End of the World (USA-Germany, 2007)
- From the Master Class programme
- Werner Herzog, director
- documentary

Yes, I do watch non-Asian movies -- and not just for work either! In this case, it's a documentary film set in Antartica by German master filmmaker Werner Herzog. Antartica. Master filmmaker. I can see people thinking that, invariably, this means that the work is about penguins and is serious in tone. But although penguins do figure in the film, the focus really is more on the people (scientists, support staff, etc.) who have chosen at least part of their lives in the world's coldest as well as southern-most continent. And, again, while portions of this work are serious, sometimes even sad, other parts are really quite humourous indeed.

Shot on high definition video, some of the cinematographer could have been better and there were times when the film felt like it was (screened) out of focus. At other times though, the sheer amazing visuals offered up by Antartica more than made up for this. Also, the commentary and stories told on camera -- by people about themselves but also others, including others of the world's creatures -- truly are compelling indeed.

Touted as "the hipper, female version of Happy Together", Candy Rain is an anthology of four lesbian romances that comes with a killer soundtrack that I most definitely would like to own in the form of a CD. As for the stories tenuously linked together by women in all four of them having mysterious packets of candy delivered to their apartment, one has to say that they are an uneven mix, ranging from forgettable to actually moving.

Fortunately, rather than saving the worst for last, the worst came early in the film. More specifically, the first vignette centering on a small town girl who becomes lovers as well as the room-mate of a friend from home now living in the (relatively) big city of Taipei lacks pace and urgency and generally feels too art-house-y. But after the film segues into the second story (this one about an amusingly fussy cook (Sandrine Pinna) and the older woman (Waa) who she meets on-line and then in person, not only did the mood lighten up but the characters also became more intriguing and involving.

The third story, about Spencer (Niki Wu) and Summer (Kao I-Ling), a happy couple forced to separate when Summer feels obliged by her family to get married and have children, is by far the strongest of Candy Rain's quartet. Genuinely moving and with content that feels substantive, it ends on a very intriguing note indeed. After which director Chen -- who is male, by the way -- looks to have opted for an exaggerated approach to counter-balance the previous realistic drama with a tale of a Ricky (Karena Lam) who calls herself a masochist -- and to prove it, gets herself into relationships in which she gets beaten up by her lovers... especially after they find out that she's been two- or even three-timing them. But when it all seems really cartoony, the mood changes again before the generally interesting work finally comes to an end.

My rating for the film: 6.5 overall (but 8.0 for the story of Spencer and Summer)

In the minds of many people, Hong Kong is a shopper's paradise. But what if you don't have money? And trust me, even in Asia's World City, there really are poor people. Who do what to can, but invariably struggle, to ensure that -- to paraphrase this documentary film's title -- it's alright in their world.

Connecting a diverse group of ethnic Chinese people (some of them Hong Kong born, others of them migrants from elsewhere, including Thailand and Indonesia as well as Mainland China) and their stories by asking them about their happiest Chinese New Year, documentary filmmaker Cheung King Wai goes on to get them to pour their hearts out to the camera and this film's audience in a way that is revelatory but still never exploitative.

Viewing the film and listening to the tales of woe and struggle that are candidly told, I must admit to thinking more than once along the lines of "there but for the grace of God go I". At the same time, if I ever were to find myself in the situation, if only I could be as admirably stoic and able to remain hopeful against all odds like a couple of this film's interview subjects...

Some twelve years ago now, Masayuki Suo made the sublime Shall We Dance...? (which Hollywood later produced a completely unnecessary and way inferior remake of that, unfortunately, many movie goers have no idea is a remake). Remarkably, when he finally made a film again (in 2007), it was this serious courtroom drama that's sad rather than heartwarming, and pretty condemning about the Japanese legal system which presumes that an accused is guilty rather than innocent and provides very few safeguards for the possibility that someone has been wrongly accused.

In this movie's case, the accused is a young man who stands accused of having groped a schoolgirl on board a crowded train. The first lawyer he sees tells him to plead guilty since the crime only carries a small fine but the young man insists that he is innocent, so why should he say otherwise? A logical query, you might think, until the film proceeds to show you how much he will have to pay in terms of time and psychological distress as well as financially just to plead his case.

Full of details and good acting, this 143 minute film doesn't have a single moment that doesn't feel unnecessary. At the same time, it most definitely is not a feel good work, so those who wish to be guaranteed that there will be light at the end of a long tunnel should give this dramatic offering a pass. And should it not be obvious, no, I don't think this is a film that is going to get remade by Hollywood any time soon -- something that, frankly, I think is a very good thing indeed!

Wooohooo! It makes three films we actually equally like :)

I too think very highly of "I Just Didn't Do It!" and agree with everything you said, but I guess I'm slightly more optimistic about the ending.

Did you know that Suo san got the idea from a small story in a newspaper?

I also highly recommend "Sumo Do Sumo Don't" for some of that soft and endearing humour particular to that director.

And I completely agree about the remake.

One of my friends (who is a fan of Gere and Lopez so forced me to accompany her to this remake) saw the original after liking the remake very much and declared it not so entertaining and the leading lady really not so pretty, especially in comparison to J-Lo!!!!!!!

so my 2 big questions about Candy Rain are: 1) how is Cyndi Wang as an actress? I know she's done TV shows but I've not seen anything with her in it beyond music videos. She's a guilty pleasure of mine now!

And, 2) what is on the soundtrack of the film besides the Faye Wong tracks? Most reviewers do mention the soundtrack as being excellent and I'm curious now beyond the Faye songs (which I am assuming are not new recordings?).

Maybe we just tend to disagree with regards to Hong Kong movies then... ;S

And yes, did know that Suo san got the idea for "I Just Didn't Do It" from a story in a newspaper.

Sorry to disappoint you but Cyndi Wang didn't make much of an impresion on me as an actress. As "Candy Rain"'s music: Yes, the Faye Wong songs are old ones -- the nice thing though is that, as with the other songs in the movie, their lyrics are subtitled! Also, am not familiar with the other music but am imagining that they're new(er) songs and maybe sang by the likes of Cyndi Wang and Karena Lam...

Candy Rain looks like a fantastic movie. I can't wait to watch it.

Do you know what song is featured in the movie's trailer?

Like I wrote in my blog entry, "Candy Rain" is on the uneven side. Keep your expectations low and the chances are higher that you'll like it, I reckon.

Also, sorry but don't know what song is featured in the movie's trailer; this not least since I've not seen said trailer.