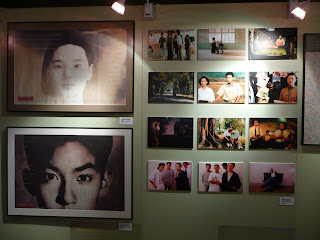 This documentary film by Mainland Chinese director Li Ying about Japan's notorious Yasukuni shrine has been both dogged by protests and controversy as well as emerged winner of an award at the 2008 Hong Kong International Film Festival (HKIFF). Walking into a screening of the film with this knowledge (since the HKIFF award was announced midway through the fest), I must admit to having had high hopes regarding the quality of the work -- something which meant in part that I thought that it would provide quite a lot of insights and information into a place that many people evidently feel very strongly about.

As it turns out, however, I came away feeling rather disappointed. Frankly, I don't think it's all that well made a film and if not for its very intriguing and majorly emotionally charged subject matter, surely wouldn't have attracted all that much attention and kudos. Alternatively put, the decision to focus on what it does is daring indeed, to be sure, but its treatment actually feels rather lazy and designed to push emotional buttons rather than be thoughtful and enlightening.

Consequently, I feel like an opportunity's been lost here; one that, in the wake of all the controversy this work has engendered, may be damagingly denied to other and/or future filmmakers. At the same time though, will not deny that the film most definitely has got its share of truly emotionally raw and powerful moments -- notably when the relatives of some individuals (including Aboriginal Taiwanese but also pacific Japanese Buddhists) go to Yasukuni to officially petition for the removal of their ancestors' names to be removed from Yasukuni's rolls, only to be met by intransigence on the part of the Shinto shrine's representatives, and also when two protestors who disrupt a major ceremony at Yasukuni are actually attacked by angry Yasukuni Shrine supporters -- one of whom, in the bargain, goes into a disturbingly virulent anti-Chinese tirade upon mistakenly assuming that the protestors are Chinese rather than actually Japanese.

With a 23-year-old debutante director at its helm and a cast of unknowns for the most part (with the only person I was familiar with being Anjo Leung, the star of Magic Boy), I'm not sure whether this Hong Kong youth movie will be getting a local theatrical release. If it does, one big reason for it happening will undoubtedly be because it's backed and produced by Eric Tsang, a pretty big wig in the Hong Kong film industry as well as a great character actor and comedian.

One more 2008 Hong Kong movie whose main characters are a septet of disaffected youth as well as the HKSAR chapter of a "Growing Up Trilogy" of films whose other chapters are set and made in Mainland China and Taiwan, that which apparently originally went by the title Winds of September -- The Hong Kong Chapter is one of a growing number of movies I've seen recently that make me feel old -- or, at least, from a completely different generation as well as mindset from the principals in the picture. For while once upon a time, I actually related with the protagonists of Rebel Without a Cause and The Catcher in the Rye, the ironic fact may well be that as I've grown older, I've become less embittered and cynical about life in general!

Consequently, quite a bit of the angst and alienation in this admittedly technically okay work ends up striking me as so, well, unnecessary as well as uncalled for. So much so that it leaves me feeling impatient with the younger generation as they are being represented in contemporary Hong Kong cinema; particularly those among them with quite a bit to be thankful for and look forward to yet seem to find it so much easier to be ungrateful, filled with a sense of hopelessness and exude -- and often act upon -- self-destructive tendencies... :S

In summation: If my HKIFF experiences had ended with these two works as the final films viewed, it would have felt like quite the shame -- given that I did view my share of really good works earlier on. Fortunately, as I've previously mentioned, although the 32nd Hong Kong International Film Festival officially drew to a close on April 6, its The One and Only Edward Yang programme (which comprises a complete retrospective of the late Taiwanese auteur's films) continues through to May. So this past Sunday, I was able to have the privilege plus pleasure of catching back-to-back screenings of A Confucian Confusion (1994) and Mahjong (1996), and I further look forward to checking out at least a couple more Edward Yang films in the near future! :)

So the Eric Tsang-produced flick was a downer, unlike Magic Boy? I finally watched Magic Boy and I loved it -- too many music montages BUT probably the most enjoyable non-Johnnie To-related film I've seen from Hong Kong in the past year or so. Stuff like The Drummer looks so forced and obvious and clumsy next to the effortless mood I got from Magic Boy.

Maybe Tsang should direct instead of just produce?

Yeah re "High Noon" being much more of a downer than "Magic Boy" (which, BTW, Eric Tsang also produced). Glad you liked that film. It's one of those works which is a nice surprise and one doesn't want to make too much of for fear that people might find it disappointing if it were to get over-hyped. But, yeah, a nice little movie -- one whose director has an obvious love for his part of Hong Kong. :)

I can't remember it right now but there was something Tsang produced in the past that I didn't like quite as much as Magic Boy.

So Magic Boy is showing a different side of Mongkok than the side shown in stuff like One Nite in Mongkok? What's the reality?

I was a bit depressed and I watched Welcome to Dongmakgol and Magic Boy back-to-back and I actually did feel a lot more optimistic about life in general afterwards (until I went back to work the next day! LOL!).

Movies -- good movies -- do have power and I think that ties into your disappointment with the documentary of the Yasukuni shrine -- it should have been more powerful, right?

The Sundance Channel in the US shows documentaries that are frequently just as disappointing even though I usually agree with the points being made.

Re Mongkok reality: I think it's a bit of both. I.e., Mongkok is where I tend to head to for shopping trips (be it for cargo pants, a digital camera, DVDs, Hello Kitty paraphenalia, etc.). At the same time, it's also one of those places where it adds to the atmosphere (and the feel of being in a [Triad] movie!) to see Triad types getting stopped and having their ID checked by the police... ;S

Re the Yasukuni documentary: Yep my wishing it were more powerful though I'd also have settled for more informative.

I just looked up Tsang's filmography and he's produced a lot of stuff, and I haven't seen Jiang Hu or Ah Sou yet. So I think I'm probably thinking of Men Suddenly in Black 2 'cause it was a relatively recent one that I recall being disappointed in.

And I liked the first Men Suddenly in Black.

So no more reviews from the fest?

Mongkok is awesome! And I know more than one Hong Kong film fan (including myself) who has had fantasies of living for a time in Mongkok -- although my real fantasy is Yau Ma Tei (in the apartment Nicholas Tse had that overlooks the Yau Ma Tei police station or one of the apartments next to the Broadway Cinematheque). OTOH, my local friends are horrified when I tell them this because to them, Mongkok -- and Yau Ma Tei, especially -- is generally rather low end and Triad/prostitute ridden. ;D

Re fest reviews: Might do some more -- pretty much all Edward Yangs if people are interested. (Am going to watch "In Our Time" tonight and have tickets for "Taipei Story", "The Winter of 1905" and what there is of his last film, "The Wind".) A review of "Besieged City" (which opens in theatres on May 1) will be included in the next issue of bc and the issue after that should have a review of "City Without Baseball" (which opens in theatres later in May). :)