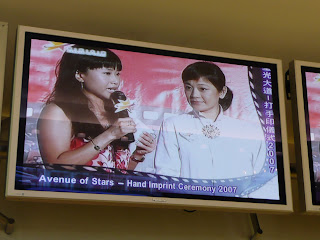 As this blog's readers know (especially after the discussion on this entry's comments thread), I've got a lot of time for Sylvia Chang, whether as an actress, singer, scriptwriter, general entertainment personality or film director. A major multi-talent, if there ever was one, Tempting Heart (1999) -- which she helmed, scripted and had a small role in -- comes very close indeed to breaking into my top 10 Hong Kong movies list.

So, it'd be safe to say that Run Papa Run was one of the most anticipated movies of the 32nd Hong Kong International Film Festival (HKIFF) for me, and getting to see Sylvia Chang and many of the movie's stars in the flesh before the screening of this film that I attended looked like it'd be a great prelude to an entertaining evening out. But, in retrospect, my hopes may have been pitched too high. Put another way: I am obliged to report that Sylvia Chang's first directorial effort since 20:30:40 (2004) proved to be on the disappointing side -- and particularly since this story about a doting father who tries to hide his being a Triad from his largely loving daughter started off okay but felt like it ran out of steam and inspiration about two-thirds into the movie, so that the last 20 minutes of the work -- which I've heard had not been in the original script -- was actually quite painful to watch.

Another general problem with the movie is that it's so focused for the most part on Louis Koo's character that it wastes the talents of many of its cast who, frankly, are better actors than him. In particular, Rene Liu and Ti Lung are wasted in their parts as Koo's character's wife and father-in-law respectively. At the same time, there's no denying that it was nice to see three generations of actors and also multi-generational families featuring in this movie that worked best as a comedy but sadly became rather clunky when it inexplicably turned melodramatic and preachy on us.

Veteran director Yoji Yamada is best known for his long-running Tora-san series of movies but I have to confess that until Kabei, I had only been personally familiar with movies from his recent 'Samurai Trilogy' (e.g., the mesmerizing Twilight Samurai and even more enthralling The Hidden Blade). So this drama set in late 1930s and early 1940s Tokyo for the most part was my introduction to his non-samurai-focused work -- and after viewing it, I can but say that I really do looking forward to seeing more films by this Japanese master filmmaker.

A humanistic paean to motherhood that also is quite the heartbreaking indictment of war-mongering and the suppression of dissent, it's guaranteed to get one tearing up -- at the end upon finding out the long-held wish that someone finally deigned to voice out on her deathbed, if not before. And yet, it also has its scenes that induce laughter (sometimes slap-sticky, other times borne out of sheer relief) as well as moments that provide testimony that less really is more by showing that the simple can be so very beautiful and impressive.

Sitting in the HK Science Museum Lecture Hall waiting for the film to begin, I happened to look to my left and discover that the gentleman in the next occupied seat to me happened to be none other than director Lawrence Lau (City Without Baseball; Besieged City; My Name is Fame; Queen of Temple Street). And after the film ended, the South African -born helmer, my German friend and I had an interesting discussion about this modest but still interesting work from my home country. Yet one more of those sorts of experiences outside as well as inside of film screenings that makes the HKIFF such a special event to me.

One of the things we discussed was how this was the kind of movie that appears to reward (more) those with insider knowledge and/or familiarity with its cultural millieu. One reason being that the devil is in the details and for another, it being so that what otherwise might seem to lack a cutting edge and controversial bits may -- when viewed from a native angle -- actually be quite bold in including certain depictions along with making certain statements.

Like quite a few other recent art-house type Malaysian films which have got this strain of Malaysian cinema being compared to the Taiwanese New Wave, Days of Turquoise Sky is slow-paced, under-stated and often depicts lives which seem to be rather trivial, yet say quite a bit about the society in which these lives are being led. At the same time, unlike with certain recent -- and, sadly, to my mind, much more critically acclaimed -- examples, this originally made-for-TV work also still feels happily unpretentious. All in all, then, a respectably competent and solid piece of filmmaking, even if by no means super gripping nor attention-grabbing.

The first of a conceived trilogy of historical bio-pics of the great Mongolian leader, Genghis Khan, this epic film that was Kazakhstan's official Foreign Language Film Oscar nominee has a Russian director, a Japanese lead actor heading a multi-national cast that includes a respected Mainland Chinese thespian along with Mongolian actors and Kazakh and Kyrgyz stunt riders, plus stunning Central Asian scenery lensed to great effect by Sergey Trofimov and Rogier Stoffers.

With dialogue that's largely in Mongolian (surprising considering its multi-national cast but all the admirable for being so) and a de-glammed, even gritty and downright brutal, look and feel, the sense is that authenticity was very much an aim. At the same time, room also appears to have been made for some flights of fancy and imagination which help keep the historical work exciting and interesting as well ensure that it is a far cry from being stolid or stodgy.

Although Mongol has a running time that's over 2 hours, it still can feel truncated at times due to abrupt transitions and there most definitely is a sense that there's plenty left to depict of Genghis Khan's life and exploits in the two more envisioned works to follow. All in all, got my appetite whetted sufficiently so that I really am hoping that I'll get a chance to check out the films that continue this colorful tale of a larger-than-life figure who founded what remains the largest contiguous empire in history -- and on a big screen too!

hi! what a coincidence!! i just blogged about tempting heart. definitely in my all time top 10 list ;-))

Mongol will screen at the upcoming S.F. International Film Fest (late-April). It is a film I'm interested in.

Believe me when I say that "Tempting Heart" gets closer and closer to being in my all time top 10 list each added time I watch it. Same with "Chungking Express"... :)

Hope you check out "Mongol" on the big screen where it belongs and won't regret doing so! :)

I feel lucky to have seen Mongol on big screen too (again at a festival last October) The film also found release in Turkish theaters (not suprisingly).

Actually after having met the director and learning how hard it was to make the film I admire it even more. Both Asano and Sung studied Mongolian for 6 months before the shooting commenced and really it made all the difference (especially in comparison to the Japanese directed film telling the same story). Mr.Bodrov did a great job but I'm sad to say that he is not planning to direct the other two films.

How disappointing re Sergei Bodrov not planning to direct the "Mongol" sequels but those sequels WILL be made, right? Hope so!

Bodrov's reply to your question was "I really don't know"

Hey! YTSL! Didn't know that you posted a review of KURUS! Glad you liked it! Been settling down over here in Tokyo :D

Thanks for reading the review. BTW, I asked a question of the director re which TV channel it was originally made for over here at one of its HKIFF screenings. Don't think I got a clear answer, so would appreciate one from you on your next visit! :)

Thanks for the answer and good on NTV7 for commissioning the film. :)