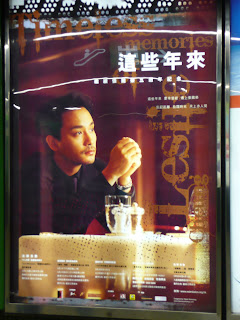 On April 1, 2003, while Hong Kong was in the grip of SARS, singing and acting legend Leslie Cheung played a majorly cruel April Fool's Day joke on himself and those who loved, cared about and/or looked up to him: He took his own life by jumping from the 24th floor of the Mandarin Oriental hotel in Central.

Leslie (as his fans and so many others routinely referred to him -- either that or "Gor Gor" (Elder Brother)) was only 46 years old when he died. Sadly, it was revealed in the days after his untimely death that he had been suffering from depression for some 20 of those years.

Whether he intended for it to be this way, Leslie now will stay forever young in the eyes and minds of people who remember him. And there are many, as can be seen by there continuing to be commemorative events staged this year as well as previous years. (As an example, there was a memorial screening of Days of Being Wild earlier today at a local cinema and there will be another one tomorrow evening -- but I can't bring myself to go to view it as it's the one Leslie film I've been unable to watch from start to finish since his death. It's just too depressing, especially given the intrusion of real life into that reel-ity.)

Rather than end on a sad note, however, here's going ahead and quoting the following largely celebratory comments by Brian in the Leslie Cheung entry of the Hong Kong Cinema: View from the Brooklyn Bridge's Actor Index, the bulk of which were written when Leslie was still very much alive:-

Having spent some time in earlier pages extolling the pouty lips of some of my favorite female stars, I guess it is only fair to do the same for Leslie! His Days of Being Wild perpetual pout was splendid – though not as intriguing as his boxer short dance in front of the mirror (wonderfully parodied by Francis Ng in Those Were the Days). Leslie is a trip. In every way imaginable except officially, Leslie has admitted to his homosexuality – Who else would (have the nerve to) have a concert tour in which he dressed in various womanly outfits and sang “I am What I am?”. Or there is my favorite quote from him while filming Happy Together when Tony Leung Chiu-wai complained about having to make love to Leslie in take after take – “now you know how I have felt all these years”!

For most romantic leading men, this would be instant career suicide – but not for Leslie. He is too much of an institution in HK (and the rest of the Chinese diaspora) and he is bigger than his sexuality – he is bigger than just about anyone in HK – an enormously popular singer for two decades and one of the bigger box-office draws for years. People -- including grandmothers along with their teenage and preteen grandchildren -- just love Leslie...

As the lead in the wonderful A Chinese Ghost Story [in 1987], Leslie reached the top ranks of romantic leading men in HK and this was only strengthened over the next couple of years with roles in A Better Tomorrow II and Rouge. One thing that I like about Leslie is his willingness to take chances and in 1990 he played the self-absorbed but oh so attractive male lead in Days of Being Wild. It is a tough role – a not very likable character that still manages to evoke your sympathy – and Leslie was fabulous – and deservedly won the Best Actor award for it...

He was more than a legend – he was loved - "Gor Gor"... to everyone. It was more than his music, it was more than his films that inspired this affection – it was simply him – his outrageousness, his charm, his quick smile, his outbursts – his boyish looks that barely aged had made him Hong Kong’s own son.

Hope you're resting in peace, Leslie, wherever you are.

A lovely tribute to a wonderful actor.

God rest his soul in peace.


I still remember the A Chinese Love Story screening at HIFF (thank you for that sbk), how the full theatre applauded when he was on the screen the first time in the film and many in the audience (including myself) cried during.

You're welcome, and thanks for reading.

I was at the 2004 HKIFF screening of "Rouge". Imagine the applause when Leslie and Anita Mui first appeared on screen...

BTW, a colleague told me that Hong Kong TV last night had a Leslie tribute/commemoration. Her one complaint: All the clips of him were from movies and scenes that were oh so sad...