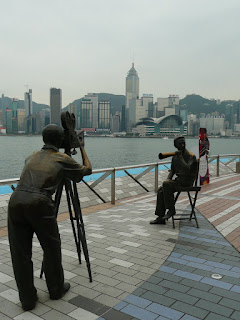 Some more evidence, if it be needed, that Hong Kong
is a land of movies (and movie lovers)
The 32nd Hong Kong International Film Festival (HKIFF) officially got underway a little less than three weeks ago on March 17th. Today, it officially draws to a close -- even though, actually, there will be associated HKIFF screenings into May of such as the films of Taiwanese auteur Edward Yang (some of which I've already got tickets for and am very much looking forward to checking out -- for the first time, with English subtitles and on a big screen).

Like I mentioned in an earlier blog entry, this year, circumstances have ensured that I've been to fewer HKIFF screenings than in the previous few years. (And, indeed, today, I've got two classical music concerts to go to, so won't be taking any more HKIFF screenings!) At the same time, even though this was a busy week at work, I still did manage to take in another two screenings to bring my HKIFF viewing total to date to fourteen films.

Also, again as mentioned previously, I also saw two films -- Lawrence Lau's Besieged City, and Lawrence Lau and Scud's City Without Baseball -- that officially had their world premieres at the HKIFF ahead of the film fest. Since those two films are due to have theatrical releases soon, I'll leave off commenting about them for later. But in the meantime, here are some thoughts about the first four films I viewed at this year's HKIFF (with comments re the other ten coming up soon -- I promise!):-

The programme notes for this Ching Dynasty court drama that was made one year before the Communists came to power in China and established the People's Republic of China describe it as "a historical epic that actually changed history, having played a key role in the development of the Cultural Revolution." Further research yielded a quote from Yingchi Chu's Hong Kong Cinema: Coloniser, Motherland and Self that told of the Communists having "accused the film of insulting the Boxer Rebellion and praising the British imperialists as reformists modernising China. In the early 1960s, in spite of the film having been banned in China, Mao Zedong launched a national debate to condemn the film... The national debate was one of the triggers of the Cultural Revolution" (2003:11)

For my part, while I could see that there were portions of the film that were less than positive about the Boxers and their rebellion, I didn't see British imperialists being praised for being reformists. Also, if anything, it seemed that the film contained the same message as that supposedly being hawked early on during the Cultural Revolution: That old -- particularly in the form of the manipulative Empress Dowager Cixi and her cabale, notably her double-faced eunuchs and conniving ladies-in-waitings, was bad and reforms and change were needed for the greater good of the people and country.

On a less political note, this historical work contained amazing performances by several cast members (notably the actress-singer I later realized was the legendary Zhou Xuan but also the less well known Shu Shi and Tong Yuek Ching) and had a very compelling story and well-written script of the sort that later sumptuous works on the same subject by the Shaw Brothers' costume drama specialist Li Han-Hsiang too often lacked. So while I wouldn't go as far as Brian in proclaiming it the best film I saw at the HKIFF, it still made for a great start to this year's HKIFF for me.

My brns.com rating for this film: 8.5

I like a whole range of films but if there's any one kind of film that I have come to realize that I like most, it's that which is genuinely quirky as well as full of warmth. And that is precisely what this inspired first feature offering from Yosuke Fujita is.

On the surface, it's a piffle of a movie, with hardly any major dramatics and, also, no bad guys, no scenes involving sex or eye-catching violence, etc. And its three main characters (a trio of 20-something-year-olds; two male, one female; one, an actually pretty harmless horror aficianado, the second a nice guy hospital administrator who feels there must be more to life than what he currently has, the third a clumsy artistic type) are neither major achievers nor majorly delinquent folk as well.

But in this film, the seemingly trivial and mundane can become very interesting, and individual eccentricities provide the grist for absolutely hilarious storylines and guffaw-inducing visual gags. Utterly good natured and without a mean bone in its body, this is the kind of movie that gives Japanese cinema -- and, I'd even venture to say -- Japanese culture a truly good name.

Less angry and negative on the whole than I must admit to having expected, this documentary on Hollywood's depiction of the Chinese by Chinese-American filmmaker Arthur Dong is interesting and enlightening but also often sad. With appearances by a whole bunch of luminaries, some of whom are more politically culturally aware as well as insightful than others, it nonetheless is far more than just a 'talking heads' type of show.

Something that I think is particularly telling is hearing the likes of Joan Chen and James Hong speaking English fluently and articulately, than beholding -- as well as recalling -- the pidgin English that comes out of their mouths in many a movie they've appeared in. Another revelation is seeing Nancy Kwan in excerpts from movies like The World of Suzie Wong and Flower Drum Song and also out of the movies and realizing how Caucasian she looks, at least to these ethnic Chinese eyes!

At the same time, however, I found myself wishing that this film had gone further in making some of its points. For example, I really do think it would have been useful -- especially for people who aren't familiar with her overall filmography -- to be informed, after hearing Lisa Lu talking about how in Hollywood, pretty much all the roles she got was as a bargirl, that over in Hong Kong, this same actress has played -- and won a Hong Kong Film Award Best Actress prize -- an empress (The Empress Dowager) and matriarch of a family of woman along with male warriors (14 Amazons), an aristocratic widow (The Arch), and so much more.

At last year's Golden Horse Awards, Joan Chen caused a stir by winning the Best Actress for her The Home Song Stories performance, and thus preventing Ang Lee's Lust, Caution -- which she actually also had appeared in -- from sweeping all the major prizes. Not having seen Tony Ayres' film at the time, I too was quite shocked; not least because Tang Wei had turned in a genuinely great performance in the Ang Lee passion play.

But now that I have done so, I defintely have to agree that Joan Chen deserved that award and so much more. With few scenes in this drama that centers on a woman with two children, yet just not prepared to be your average domesticated wife, left undominated by her, she is a commanding and utterly charismatic presence in this film -- playing the sort of character that, in the hands of another actress, could so easily devolved into a one-dimensional negative part.

Tony Ayre's semi-autobiographical work feels so very painfully personal and true, making it the kind of movie I'd consider a masterpiece and am very glad to have viewed yet probably won't want to watch again. Part family drama, part immigrant story, it is seriously compelling, containing a truly memorable performance and also good work by all else involved.

Very interested to see Fine, Totally Fine and Home Song Stories. A film without sex, guns, blood and heavy drama (FTF) is what I'm often in the mood for. I probably would not have heard of these works if it weren't for you.

You made my day with your comments. Was wondering whether I should continue blogging about the films I viewed at the HKIFF after not getting any comments about my blog entries but now that you -- and hdoong on the second entry -- have done so... :)

Oh now I feel guilty for not commenting. I did feel like I had established a sort of track record of being one of the first commenters on your film-related posts but I couldn't think of anything insightful to say on either of these last two posts.

Hey, always keep blogging. No one ever comments on my blog and I still blog. Occasionally.

I'm so glad that you liked The Home Song Stories, I actually saw it last year in October at another fest and Tony was there also. Unfortunately the film is not semi autographic, since every event depicted happened, he just said he could not remember the conversations very well but believes he managed to give the gist of them.

As a fellow blogger, you should know that comments are very much appreciated! More seriously, was wondering whether people really would be interested in my comments -- as opposed to photos -- from the HKIFF! ;S

I take your point re "The Home Song Stories" but I also think the film might be called semi-biographical (rather than autobiographical) because it's focused more on the mother than either of her children, including the son. But, yeah, glad you are another fan of this movie! :)