Cheers to great beers and friendly company in Osaka! :) 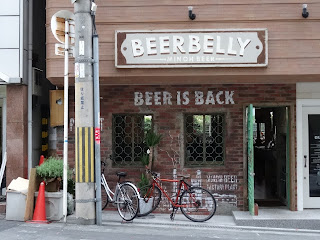 At a place serving the nectar that's Minoh Beer once more! 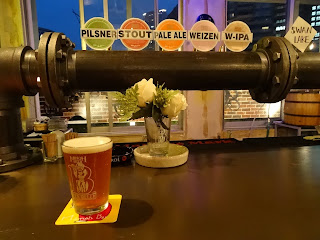 More draft beer selections at Beer Belly
than at the Minoh Beer brewery! 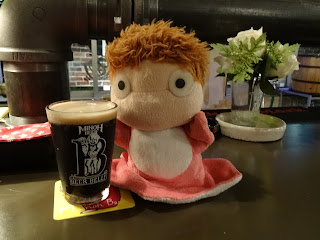 Puppet Ponyo was happy...
that there's a glass of beer shorter than her! ;b


I'm not going to lie: after getting into Osaka the most recent time that I was there, checking into my hotel and availing myself of the assistance of the helpful tourist information office staff at Osaka Station, my very first destination was a branch of Beer Belly, a bar associated with Minoh Beer that was within walking distance of my hotel and Osaka Station.  But because I discovered that the bar doesn't open until 5pm (at least on weekdays), I went to Dotonbori to get some food at Daruma and then Takoume before returning for what turned out to be several nightcaps at the ji-biru (regional beer; i.e., craft beer or microbrew) joint!

Maybe if I hadn't had so much food in my stomach already, I wouldn't have ended up drinking as much beer as I did at Beer Belly.  In any case, I tried to be conservative by ordering half pints of beer each time -- but after drinking three half pint glasses worth of Minoh Beer's superb W-IPA, got to reflecting that it'd have been cheaper to have ordered one full pint glass along with one half pint worth of the beer rather than three separate orders of half pints!

Mindful of the W-IPA being 9% alcohol, I decided to have try the other beers (which are all 5% alcohol) first.  The very first beer I had at Beer Belly was one I had not tried before: Minoh Beer's Pale Ale. But although I generally prefer pale ales to stouts and IPAs, I actually prefer the two other styles of beer brewed by the microbrewery which I had tried last September when I went to the Minoh Beer brewery.  So I decided to go for the stout for my second glass of beer this time around and the W-IPA for my third half pint portion.

At the bar that evening, there were two versions of the W-IPA: the regular keg version, and the "real ale" version that was cask conditioned and was less fizzy.  At the risk of being labelled a beer Philistine, I must admit to liking the keg version more -- and that's what I decided to have for my fifth half pint glass rather than try another of the other beers on tap at Beer Belly (which *sob* included a seasonal imperial stout brewed by Minoh Beer until just a few days before I got there)!

Somewhere between my third and fourth beers, I got to chatting with a friendly couple sitting at the bar next to me.  Both engineers as well as Osakans, they also clearly were beer lovers who regularly spent evenings at Beer Belly.  Recently, they told me, the big Japanese breweries like Asahi had started brewing their own pale ales and such (rather than just the usual lager style beers).  But they just couldn't compare to the likes of those brewed by Minoh Beer.

Having ordered their beers by the pint and drank pretty quickly, my new female engineer pal was the first of us three to decide to call it a night.  After she told her partner she wanted to go home, one of the more amusing bouts of leave-takings I've been party to ensued -- with her not only shaking both my hands several times and telling me how happy she was to have met me but all three of us high five-ing each other a few times into the bargain!

Add in my experience at the Minoh Beer brewery on a previous visit to Osaka, one of the Beer Belly bartenders also having been eager to engage me in conversation and the jolly cook at Takoume earlier the same evening, and I am inclined to conclude that Osaka may well be the most foreigner friendly place in Japan; with people being more fluent in English -- or less afraid to make use of their English knowledge (which pretty much every Japanese has since they are taught it at school) -- than in many other parts of the country.  Coupled with the conversations I had often being punctuated with much laughter and good cheer, I really do think that Osaka's a great place to visit -- even if it may not have repositories of beauty like the Adachi Museum of Art, a UNESCO World Heritage-listed site like Iwami Ginzan, or sublime sunsets like Matsue's. :)
Posted by YTSL at 10:34 PM

Your latest trip wouldn't be complete without a beer blog and the converations you manage to have with strangers inside...As for Puppet Ponyo, it amazes me that her expression or demeanor seems to reflect the environment where you pose her for the photo. For instance, she looks elated in your photos of her in the gardens of the Adachi Museum, or amongst the flowers at Daikonshima's Yuushien...Yet here, posing by the beer, she appears mildly dazed, perhaps experiencing a contact high from the smell of the brew. I hope this Nippon traveler is getting a well deserved rest at home.

You can really drink ah!? I have tasted (sips only) a few types of beer and have no courage to drink a glass of it. My face turns red drinking beer. haha.....

Absolutely re my latest trip to Japan having not been complete without a beer blog. And agree re Puppet Ponyo and her expressions and demeanor seeming to change from one situation to another! ;b

By Australian standards, say, I don't think I'm a big drinker. But it's true that by the standards of many female Asians, I have quite a high tolerance for alcohol... ;b

I was in a place where I didn't have easy access to email, etc. -- which I will post up pictures of in the next few days. But I'm back online now. Hope you didn't get too worried! :)