On transit in Penang, Bangkok...and Copenhagen! 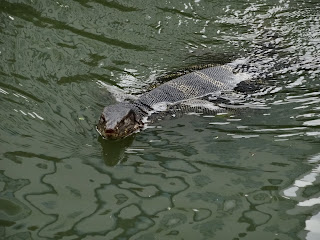 Not a sight one is likely to see in Hong Kong... 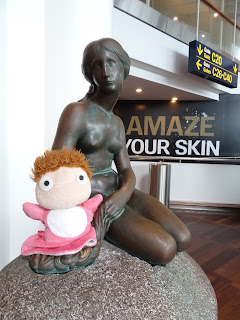 That's not the original little mermaid statue...
but it still should be easy enough to guess
where Puppet Ponyo had this photo taken! :)


For the better part of this month thus far, I've been traveling about and therefore not had time, inclination or -- at times -- ability to check my emails and blog.  This is a state of affairs that may freak out many people but, in all honesty, I'm fine with -- and could be said to even welcome -- my having periods of "digital detoxification".  (And before anybody asks: no, I still do not have a "smart" phone nor feel inclined to go get one.)


The eagle-eyed among you will have noted an addition to the Where in the world I've been to date map at the bottom of my blog's pages -- and that's indeed where I've spent the better part of the last three weeks or so.  But because my most recent holiday was with my mother and she wanted me to travel with her from Penang rather than meet up in the country where we'd be going on a cruise, I first went to Malaysia for a few days -- and it was indeed from Penang that she and I embarked on a journey that would involve three different flights and several hours of transit in first Bangkok and then Copenhagen before arriving in Bergen, Norway's second most populous city (despite having a municipal population of less than 280,000 people!).


Like Penang, Bangkok is not entirely new to me.  So rather than devote much of my transit time there to sightseeing, I arranged instead to meet up with old friends there.  But while the friend I met up with in the Thai capital city post Norway trip came over for lunch and drinks at the hotel that my mother and I had been put up at by Thai Airways, I ventured out of the hotel when I transited in Bangkok on the way to Bergen -- and ended up strolling around Lumpini Park as well as having dinner at another friend's nearby apartment.


A green oasis in the middle of an increasingly large concrete jungle, Lumpini Park has lovely green lawns, ponds where paddle boats shaped like swans can be rented out for a ride and areas where weightlifters and people into keeping fit can be found.  It's also home to a few statues (including of Rama XI) and shrines.  But what my friend thought was the park's star attractions were its resident  monitor lizards -- which, when in the water, can resemble crocodiles and alligators, and when partially hidden behind rocks, have parts which got me thinking they were snakes!

Despite their appearance, my friend assured me that these monitor lizards are largely not harmful to humans.  Still, you don't want to be bitten by them because it's said that their saliva's so toxic it can kill people -- and at the risk of sounding like a fraidy cat, I think their stony stares can be rather frightening!

In retrospect, I wish that my mother and I had arranged to spend more time in Copenhagen.  As it was, both our stops there to and from Bergen were not long enough to venture outside of the airport.  At the same time though, I felt like I did manage to get a taste of Denmark at that facility -- and not just because there's a replica of the Little Mermaid statue in Copenhagen harbor there (which Puppet Ponyo of course felt obliged to pose with since Ponyo on the Cliff by the Sea was inspired by Hans Christian Andersen's tale)!

Among other things, Carlsberg beer and Lego sets were prominent at the airport.  Ditto re quite a bit of pinewood being used for the floors and walls of the building, and furniture about the place that screamed out "Scandinavian design!"  Then there were the many types of liquorice on sale -- with the salty versions looking to be quite a bit more popular than the sweeter kinds preferred in places like the US, Britain and New Zealand.

Incidentally, I asked a Swedish fellow who lives and works in Norway what it is with Nordic types and liquorice.  He said he had no idea but that it shocked him on his travels to other parts of the world when he went into supermarkets as well as convenience stores and often was unable to find even one kind of liquorice sweet on sale in them!  And yes, he knows to bring his own stash whenever he travels out of the Nordic region now...;b
Posted by YTSL at 5:11 PM

Nice to have you return to the blogosphere after the "digital detoxification" of your vacation. You are having quite a whirlwind travel year...In her pose, Puppet Ponyo looks quite enthusiastic - she probably would have been ecstatic if she had seen the original mermaid sculpture.

Good to be back, and see you continuing with your commenting ways. :)

Indeed re it having been quite the whirlwind travel time these past two months. Normally, I'd space out my travels but June turns out to be the month that my mother's free to travel for something other than to see the grandchildren (who sometimes we are inclined to think include Puppet Ponyo)!