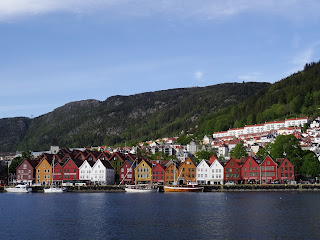 A view of Bergen's Byrggen and the surrounding area 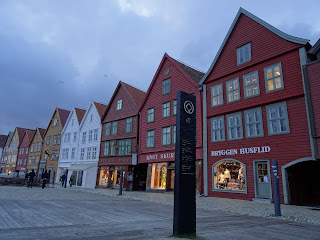 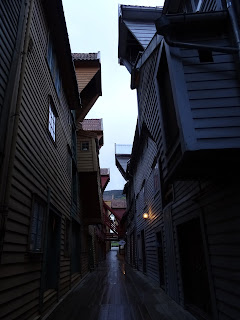 
For some years now, I've wanted to visit the northern section of Western Europe known to English speakers as Scandinavia.  This even though I wasn't quite sure which countries counted as Scandinavian, and also what was the difference between that country grouping and that of the Nordic countries or states.


What I knew though was that the greatest attraction as far as I was concerned were the fjords -- and after determining that Norway has the most, and most visually attractive, of these long, narrow inlets created by glacial erosion, the westernmost of the Scandinavian countries was where I headed to earlier this month (along with my mother).  More specifically, my mother and I went on a cruise that was proclaimed to be "the world's most beautiful voyage" that would take us through and past several thousand kilometers of scenic Norwegian fjords and coast, with the majority of the journey being spent up in the Arctic!


We arrived in Bergen (via Penang, Bangkok and Copenhagen) the day before the start of our cruise, as I figured it'd be best to give ourselves a day to overcome jet lag before going onto the boat that'd be our temporary home for 12 days and 11 nights.  Over the course of our first 30 hours or so in Norway, we also were able to do such as figure out how Bergen's properly pronounced (i.e., with a hard rather than soft "g") as well as check out a few of the town's sights.


On our first evening in Bergen, we found that even though it doesn't get "the midnight sun" due to it being located a few degrees south of the Arctic Circle, it still has daylight through to around 11pm.  So after dinner, I decided to go stroll about the parts of the city near our hotel -- which included the Bryggen, Bergen's old Hanseatic wharf.


Initially, I had thought that the Bryggen consisted of just the few wooden buildings whose picturesque fronts prominently figure on many tourist-friendly photos of Bergen.  But while wandering about in the area, I got to realizing that those are but the tip of the iceberg, in that behind those buildings are many others that one can find and get to by walking through narrow alleyways.  And even when the shops, offices and other establishments which they continue to house to this day are closed, there still is quite a bit that's interesting to see in this historic section of Bergen which dates back to Medieval times.


On the face of it, the Bryggen's structures are on the modest side in size and decorative appearance -- and one may be moved to wonder whether there's some Eurocentric bias involved in having this on the UNESCO World Heritage list along with much larger historical areas like Georgetown, Penang, Macau's historic center, and Japan's Iwami Ginzan.


The more on reads up on it though, the more impressive it starts to sound.  For one thing, there's its age -- since the Bryggen has been an integral part of Bergen since the Middle Ages.  Then there's it being so that while the wooden urban structures found in it used to be common all over northern Europe, that is no longer the case.  And even more unusually and notably is that though the buildings of the Bryggen are not all original (since some were burnt down in fires over the years and such), they have over the years been consistently rebuilt following traditional patterns and methods -- and stayed occupied and in use throughout.

Strolling about the area, I found restaurants and bars occupying the premises alongside souvenir shops (many of them selling Norwegian sweaters and other woolen wear along with troll kitsch and reindeer plushies!), craft stores and travel agents offices.  I also noticed quite a few Asian people walking around -- and was later told that the three top nationalities of tourists to Norway these days are Germans, Americans (many of whom have Norwegian ancestry!) and -- surprise, surprise -- mainland Chinese.  Re the last: I figured as much since upon arriving at Bergen's airport, I saw signs in four languages: Norwegian, English, and Chinese and Japanese!
Posted by YTSL at 4:40 PM