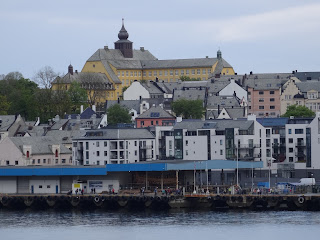 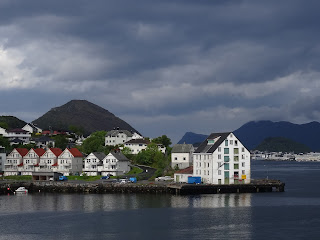 If only I had had ample time to stroll its streets... *sigh!*

If you had asked me at the start of my Hurtigruten cruise which Norwegian town, city or village I was looking most forward to visit, I'd have said that it was Alesund.  But despite the ship I was on being scheduled to stop not just once but thrice over the course of the cruise at its port (which is located right in the town center), I ended up not stepping foot in this coastal city which was rebuilt in Art Nouveau style after much of it was burnt down in a devastating fire 101 years ago.


For as it turned out, the MS Richard With's first scheduled stop on the second day of the cruise there was cut from 45 minutes to just 10 to make up for the time it lost to delays the first night.  Then, after the ship returned from a detour into nearby Geraingerfjord to spend a lengthier amount of time in Alesund's port later that day, I happened to be on a wonderful land excursion (which had topped the list of Hurtigruten excursions I wanted to go on) several miles away.


Many days later, the MS Richard With docked at Alesund once more while sailing on its southbound route.  This time, I decided not to leave the ship because the stop took place after midnight -- and I never managed to stay awake past even 11pm each night that I was on the cruise.  (This even though the sun never set most nights while I was on the ship!)


Early on, I had worried that shortened stops like the first one at Alesund on the voyage would be the rule rather than the exception.  Fortunately, this turned out to be the exception rather than the rule -- though it also was the case that on the southbound journey, there was at least one day when the ship didn't stop at any port for more than an hour to make up for time lost due to its having sailed in choppy waters for much of the night before.


Something else I learnt over the course of the cruise was that many of the places at which the ship stopped were so small that one hour -- or even 45 minutes -- could appear to be way ample time to check out the town (or, more frequently, village)!  On a related note: it was amazing how many more settlements the ship passed by that were so tiny they looked to be composed of not more than ten, even five, homes or buildings!

As a German woman I befriended on the boat and I agreed, we could scarcely imagine how such a seemingly significant percentage of the Norwegian populace could -- and could want -- to live in such isolation, and how far away such as the nearest grocery store or supermarket was from where they lived!  Also, we spotted homesteads far up steep mountains that didn't look like they were close to a road as well as the sea, and got to wondering how its residents manage to get in and out of them!

At the same time, we could also easily imagine that many of these Norwegians -- whose country's population density stands at 13.2 people per square kilometer of land -- would be horrified at the thought of living in places with as high a population density as Hong Kong (with 6,690 people in the same amount of space), never mind in high rise apartments rather than houses with plenty of greenery (or, at least, space) around them.  Put another way: it really can be a case of "different strokes for different folks" in this interesting world of ours! ;b
Posted by YTSL at 10:53 PM