An unconventional cruise experience, courtesy of Hurtigruten's MS Richard With 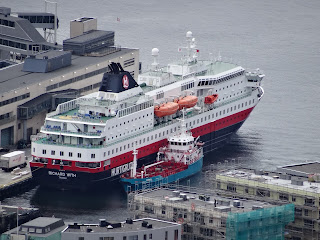 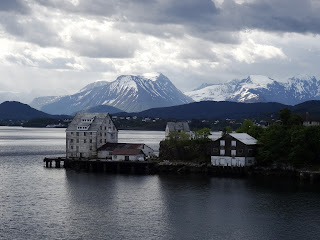 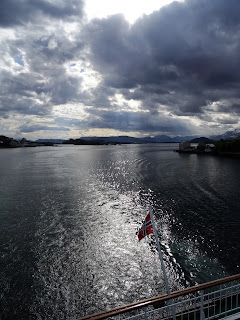 What became familiar sight on this Norwegian cruise :)
There are some things that I've told myself that I'll only do when I'm old(er).  One of these is take up tai chi.  Another is play golf.  A third is to go on a cruise -- or, rather, was, since I've now gone and done it...though having said that, a voyage on one of  Hurtigruten's boats that sail up and down the western coast of Norway, between Bergen and Kirkenes, a town with a population of around 8,000 that lies over 2,400 kilometers away, is by general consensus not really your usual cruise experience.
In 1893, Captain Richard With (whose name is pronounced like "Rikard Vit") entered into an agreement with the Norwegian government whereby his steamer company would provide shipping service to a northern section of the country's rugged west coast.  Over the years, what came to be known as the Coastal Express became a valuable passenger and freight shipping service for a large percentage of the Norwegian west coast, stopping regularly at 34 ports -- and crossing both on its northbound and southbound routes -- over the course of its 12 day voyage.
Christened the Hurtigruten (Norwegian for "fast route") in 2006, this shipping line decided early on to serve tourists as well as locals.  But even while its tourist component has increased over the years, it's never relinquished its non-touristic duties -- and its ships (including the MS Richard With, on which my mother and I sailed) still drop off and pick up freight (and often also passengers) at each and every one of the ports -- many of them on the very small side -- for which it acts a veritable lifeline, and proudly flies the Norway Post flag on each of their voyages.

The MS Richard With drops anchor at an average of 3 to 5 ports over a 24 hour cycle.  Many of these port calls are for less than an hour.  At the stops that were on the short side (with 15 minutes not being unheard of!), I often took the opportunity to walk around the promenade desk several times (4 complete circuits made 1 kilometer, the ship's friendly tour manager, Anna, told us) to get some exercise as well as views of the village or town the shop had stopped at, and the surrounding often pretty magnificent scenery.  I sometimes also frequented the open sections of the promenade and top decks when the ship was sailing -- but, more often than not, strong, bitingly cold winds put me off doing this!
Usually, there's at least one stop a day that's longer than one hour.  Almost invariably, I'd leave the ship to explore the town (or village) and surrounding area.  (Rest assured that I'll write about and share photos of specific towns and such in posts to follow.)  On three occasions, I availed myself of excursions offered by Hurtigruten that allowed me to venture further inland and afield.  Each and every time, I got something out of temporarily leaving the ship for a time -- this even when I ended up walking about in rainy, windy, surprisingly-cold-for-June (i.e., 6 degrees Celsius) weather conditions!

At one port where a more conventional -- and much larger -- cruise ship than the 11,205 ton MS Richard With (with its maximum 623 passenger capacity and total of not more than 450 passengers on the cruise my mother and I were on) had also docked, I got a taste of what it would have been like to have been together with far more people -- and thanked my lucky stars that we had opted for a small boat cruise. This on top of the knowledge that Hurtigruten's smaller boats can sail into many fjords (including the famous Trollfjord whose mouth is only 100 meters wide) and narrow sea passages that the larger cruise ships cannot.

Something else that I really like about the Hurtigruten ships are that they have an informal dress code, always.  Put another way: There are no formal dinner occasions on this cruise where people are required to dress up. Neither do the ships have casinos, live entertainment shows and the kind of things that those who go for conventional cruises consider attractions but both my mother and I had considered unnecessary distractions at best and elements that would put us off going on cruises at worst!
Basically, what we both had wanted -- and found on the MS Richard With -- were grand views of land along with water and sky; and we got that in spades courtesy of the ship almost never sailing out of sight of land, it being the midnight sun for the majority of the time that we were on the cruise, and there being loads of places on the boat from which we good get good views while seated as well as standing.
Some people might think this state of affairs boring.  Worried that I might get bored at some point during the 12 days, I took three novels on board but ended up finishing only one of them!  Oh, and I didn't check my emails even once -- and probably was online catching up on the news and such for an average of just 10 minutes a day (and this even though the internet could be on the slow side, especially when we were sailing far from any big -- by Norwegian standards -- town or city)!
Something else that added considerably to the cruise experience and occupied quite a bit of our time were the chats we had with fellow passengers; and this even though 75 percent of the ship's passengers were Germans, many of them elderly and unable to speak English. For even so, we managed to communicate with some of them -- including on one uproarious occasion when much of the conversation between four elderly German ladies, their middle-aged friend, my mother and I ended up involving our shouting names of famous German footballers (with my mother chipping in with "Franz Beckenbauer" to the delight of the Deutsch crowd)!
As for those who could speak English: in addition to a sprinkling of younger Germans, my mother and I also befriended people from Belgium, South Africa, the UK, the USA, Canada, Japan, Norway, etc.  And truly, I have to say that our fellow passengers on board the MS Richard With -- and also its friendly crew (composed entirely of Norwegians and Swedes, it seemed) -- did contribute quite a bit to making this cruise experience as thoroughly enjoyable as it was. :)
Posted by YTSL at 10:48 PM

The smaller MS Richard With does look like a real ship, not like these gargantuan top-heavy cruise ships they're building today which resemble ugly floating apartment blocks. (Example: Quantuum of the Seas, recently in Hong Kong, holds nearly 5,000 passengers - not everyone's idea of an ideal vacation)... Since the Richard With does not have "casinos" or "live entertainment shows" and is involved with freight- it sounds like a good way to experience the authentic character of Norway.

One more thing about the MS Richard With (and Hurtigruten ships) that made the experience on them feel Norwegian was that the food was definitely predominantly Norwegian. Indeed, some of the stuff that would get loaded onto the boat at some of the ports we stopped at were the ingredients for meals -- such as salmon, king crab, cloudberries... and reindeer meat! ;b

And if not Norwegian, in large part because of the passenger composition, this cruise experience felt distinctly European. Reading some reviews, this is something that may be putting to certain Americans and others. But, really, both my mother and I were fine with that! :)

Your description of the cruise ship and it's lack of the so called amenities that the cruise ships here seem to think necessary was refreshing. It's the type of cruise I might consider. The large building in your first photo of your cruise appeals a lot to me. Is it's use business oriented or couldn't you tell?

I think you'd enjoy a Hurtigruten cruise if you went -- though I also will say that it's the kind of cruise that it's better to go with someone. Most of the passengers were couples, with there also being more parent-adult child pairings than just my mother and me.

Re the large building in the second photo: I'd guess that it's business oriented. Maybe a warehouse or base for fishermen?

Hi!
As a Norwegian I must say that I am impressed by your thorough blogposts from your journey. I seems like you and your mother have made the effort to study the country´s culture and traditions. I live in Trondheim, and can second your impression of the city on a Sunday morning;) I have also lived in Kirkenes and I think your descriptions of that small, but multicultural town is to the point. You even manage to develop a liking for Kaviar an brunost!!!
Since we´re such a small country we often experience that people don´t even know that it actually is a country, and not a town in Sweden!
Tone

Thanks for your comments. They've made my day! I found Norway's culture fascinating and its natural beauty awesome. And yes, I really like its food -- and can honestly tell you at this point of writing, I have some Kaviar in my cupboard and Brunost in the fridge. Oh, and of course I didn't leave Norway without buying a Norwegian sweater... :b

Hi again!
OMG! I guess you can´t use that in HK. But you seem to travel a lot, so...
And here I am googleing a recipe for an Asian salad to go with my Norwegian salmon. Shows how fantastic the internet works I suppose. I have followed your blog on and off for some time now. I guess I came across it because of my interest in Chinese/Japanese films. And I love that Ponyo took the trip on Hurtigruta as well:)
Tone

It can get cold in Hong Kong during the winter to the point where I'd consider wearing a Norwegian sweater in an uninsulated building in lieu of putting a small blow heater on... And well, I did go to Norway last month and Germany last December! ;)

Asian salad with Norwegian salmon -- that sounds healthy and delicious!

Cool to learn that you've been following my blog on and off for some time. And hooray re your being another (Puppet) Ponyo fan! Now if only I had known about your existence earlier, you and she could have met up in Trondheim... ;b

That would have been a pleasurable experience, I am sure;)!
T

Yes, it certainly was. Highly recommended -- with the caveat that it won't be everyone's cup of tea! ;b