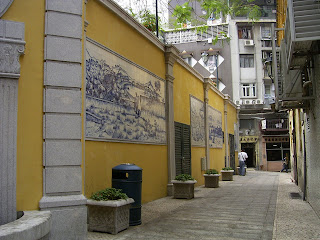 A quiet alley in the heart of the Historic Center of Macau,
the closest UNESCO World Heritage listed site
to where I currently reside 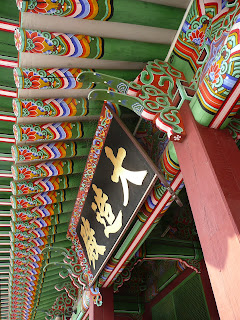 
Alejna of Collecting Tokens asked over her blog: "Have you been to any World Heritage sites? Are there places on the list that you long to visit?" And although I don't think that she was officially declaring the start of a meme, I can't resist but respond to her queries with a list of UNESCO World Heritage Sites I've visited (along with a couple of choice photos above):-

So... I make that 75 sites (in 23 countries).*# Which leaves a heck of a lot left unvisited. Of these -- to answer Alejna's second question -- there are quite a few I'd love to visit; with the top five being the following:-
And what about you, dear reader? (And yes, you should feel free to respond to my query on your own blog or this entry's comments thread!) ;b

Love the picture of the alley in Macau--shows how UNESCO doesn't just hit archeological highpoints in their list and it just looks like a very cool place.

I may come up with my own list--thinking about it briefly we have visited places long before UNESCO made them official and, in a few cases, were within a couple of miles of one, sometimes for weeks, without getting to it.

You live in a very colorful place that you live.

I'm a bit surprised that you haven't been to Angkor yet given the other places you've ventured.

The end of In The Mood for Love didn't make it a must-visit?

I'm so happy you posted your list! I was actually hoping you would, and even considered "tagging" you. You certainly did not disappoint with your very impressive list. 51 sites! Wow.

Which are the ones on the list that you would most highly recommend?

Yes, indeedy, re the UNESCO list not only being of archaeological sites (though there are indeed quite a few of those on it).

And I'm the same way as you in that there are some places I visited before they were listed -- and/or I even knew the existence of this list. :)

Hmmm... Hong Kong *is* colorful but, alas, not a world heritage site! ;b

I've long wanted to visit Angkor (though more for the archaeology than the "In the Mood for Love" connection). It's just that my plans to visit seem to keep on falling through.

The thing with Angkor is that I definitely don't want to visit it during the rainy season. Also, it's not the kind of place I'd bring my mother and since we often go on holidays together these days... ;S

And in answer to your question: oooh... difficult to say but would say visiting the following five places definitely rank among the places I feel very privileged to have been to:-

Those do sound/look like amazing places. I do hope I can get to Africa some day--I see that 3 of those 5 you highlight are on that continent.

I confess I'd never even heard of Chaco, even though I lived for several years in the American Southwest. There's even a chance I'll be going to a conference in Albuquerque next month, but I had planned to keep that trip very short (so as not to burden John too much since I'm doing a lot of travelling leaving him with the kids lately...). But it looks like Chaco is less than 3 hours away from Albuquerque...

And I guess I should put Malaysia on my list of places to go some day, too! I'd love to, actually.

(For that matter, speaking of your haunts, there's a chance I may go to a conference in Hong Kong next summer. I'll keep you posted!)

I hope you get to Africa some day too -- and that I will get back too. Also that Zimbabwe will be less troubled and be able to recover from its present troubles -- one that makes me so sad, especially when I remember how it was when I visited.

Re Chaco: I highly recommend visiting Chaco Canyon. Be aware though that if it's like it was when I went there, it's not easy to get to and does involve some legwork to explore. But the sights when you do... (And sorry but I went there in my pre-digital camera days, so can't share my photos!)

As for Malaysia: Gunung Mulu National Park is great but don't forget Penang (whose George Town is UNESCO World Heritage listed) too! ;b

And re Hong Kong: I hope that I'll be around when you finally visit - and we can finally meet! :D

My wife and I ran through the UNESCO list the other night--we have been to/at/in/through about 30 of them, almost half in Italy where you can't turn around without stumbling over a place on the list and with most of the rest in Mexico and Central America.

Like most people in the US--although that may be true of everyone who lives in a spread out country--we have seen very little of our own country. The Statue of Liberty is the only one I count although we weren't actually on Liberty Island but were next to it in a boat.

And re the Statue of Liberty: hmmm... does that count? To be near but not yet actually been? I'm curious now: was it because you were on a boat that that specifically circled around the statue or some such?

Wow! You have been to many. I think I may have been to 20. I may make my list up also. I do agree that some countries have more than others. I've been to Chile and I noticed that some Patagonia was not on the list but Los Glaciers which is part of the same region in Argentina is on the list.

Oh, and I've been to the third UNESCO site in Malaysia - Mt. Kinabalu. I need to go back to add the other two to my list.

That's a very impressive list! I am in two minds about UNESCO WHS sites, wonderful though they are. I've just returned from Albi in France where they are campaigning to be included. Reading up on the blurb, it seems that they could expect a 30% increase in tourism. Hmmm.

"And re the Statue of Liberty: hmmm... does that count? To be near but not yet actually been? I'm curious now: was it because you were on a boat that that specifically circled around the statue or some such?"

We lived in Battery Park City in Manhattan--the view from our bedroom was the South Tower of the World Trade Center. The first time I walked down the Esplanade between our apartment building and the Hudson, there was the Statue of Liberty. Since we saw it almost every day it felt almost like a neighbor.

The boat trips were just going around the lower Hudson and Upper New York Bay with some friends. We spent some time looking at, among other things, the details on the statue through binoculars from not far away.

Yeah, tourists... have too many and it can definitely be upsetting but if there aren't any or enough...

Okay, disclosure time: I worked in Penang as a tourism planner before it got on the UNESCO list. We definitely were hoping and pushing for it -- not just because we would get more tourist dollars but then so that the state government would better appreciate (and thus work to conserve, etc.) what valuable cultural heritage we had/have.

I used to stay in the Battery Park area whenever I visited New York with a friend whose mom had an apartment in the area! And yes, her place had great views of the Statue of Liberty... but, hmm, definitely still would not (and haven't) put it on my list.

The same with Mesa Verde -- which I would frequently gaze at in the months when I did archaeology field school/work in the Four Corners -- a few of the sites I worked on were nearby as was our camp! (And yes, I do kick myself for not visiting... I think it clearly was a case of familiarity bred... indifference!) :S