Culture and nature (and the supernatural?) in Bergen (Photo-essay)

On my first morning in Bergen (and, for that matter, Norway), I made my way to the entrance of the city's harbor, where lies the Bergenhus Fortress, some sections of which date back to the 13th century.  Later, my mother went along with me on the Fløibanen Funicular (which reminded us of both the Penang Hill Railway and Hong Kong's Peak Tram) up to 320 meter high Mount Floyen, and spent a lovely time walking around his scenic spot.

It was a beautiful day and very pleasant up on the most accessible of the seven mountains that surround the Bergen city center; and if we had known better, we'd have taken the funicular up but then hiked down.  Instead, we bought a return (AKA round-trip) ticket and got our exercise instead -- and some more fresh air -- by walking around the top of the mountain, including along a trail that led to a lovely lake in the area... 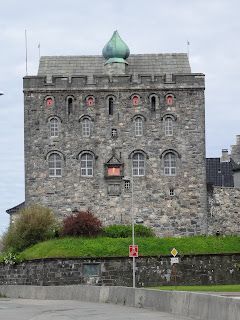 Once the residence of the last king to hold court in Bergen,
the Rosenkrantz Tower was extensively modified under the rule of
16th century governor Erik Rosenkrantz, and currently houses
exhibits on a variety of subjects, including an accused witch! :O 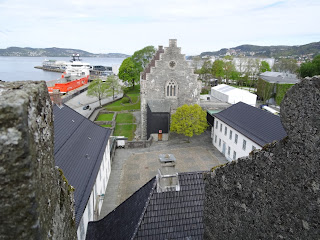 From the roof of Rosenkrantz Tower, views can be had
of such as the 13th century Haakon's Hall, the oldest
remaining section of the Bergenhus Fortress 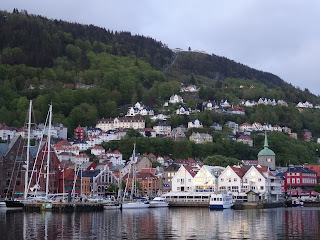 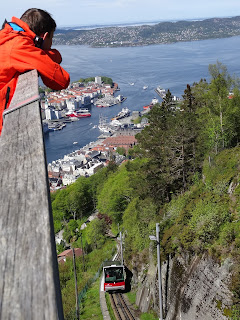 There are grand views to be had while on the

Fløibanen Funicular, and also of it after
one gets up to the top of Mount Floyen 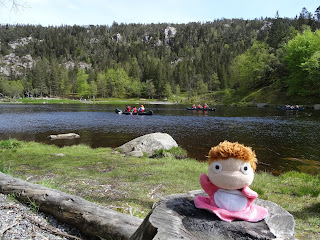 Puppet Ponyo would like people to know that if they tear themselves
away from the mountain edge, they can find such as this lake
on which folks can canoe just a few minutes' walk away 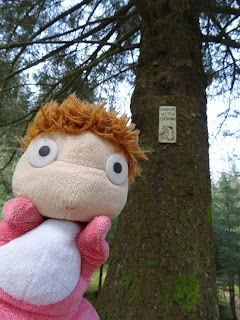 Puppet Ponyo also was aquiver to find signs about witches
(and trolls and dinosaurs too!) in the surrounding woods! :O 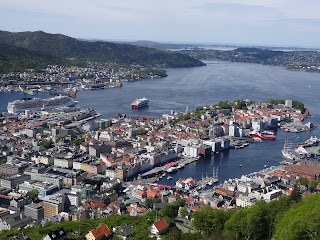 Still, rather than make haste to get down Mount Floyen,
we tarried at the edge of the mountain to drink in the scenic views
some more before finally returning to the city below :)

A vivid photo-essay with two more classic Puppet Ponyo poses to add to the growing archive of your jetsetting plushie travel companion...She does look spooked in the pose by the tree...I truly like the photo of her by the mountain lake: a tranquil interlude in your land and sea Nordic adventure!

Thanks for appreciating this photo-essay with its two -- not just one -- photos of Puppet Ponyo. Re the mountain lake: I ended up visiting it twice -- the first time, it was not so tranquil due to the screaming school-age canoeists about but after I returned there with my mother, they had gone and it was a good deal more peaceful. :)

Very nice photos. In both photos Puppet Ponyo looks like she
is enjoying herself. So...do you think some of the trolls who may have mistaken her for one of them communicated with her while you were busy snapping photos?

Glad you like the photos. So... do you think Puppet Ponyo was only acting scared in the photo with the witch sign? ;)

I did think back to a query made by another blog visitor (Baroness Radon, where are you?) as to whether Puppet Ponyo was a troll when I was in Norway -- what with the many mentions, etc. of trolls there. But the ones we saw there -- or rather their representations -- looked so ugly that I figured that Puppet Ponyo surely couldn't be mistaken for one!