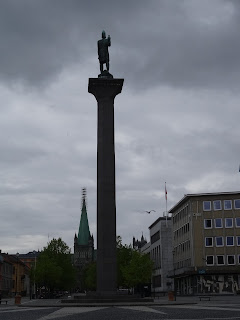 It was so cloudy and gray when I visited Trondheim
that its King Olav Tryggvason Statue couldn't act
as a sundial like it was designed to do :S 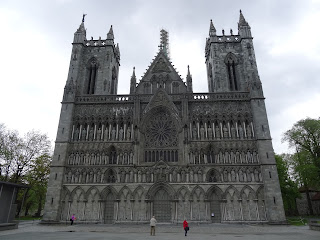 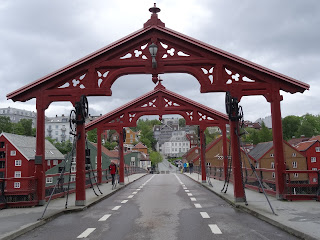 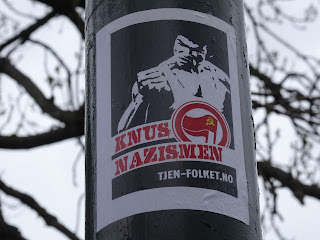 Admirers of Bruce Lee say no to Nazis? I'd buy that!


The day before I visited the central Norwegian city of Trondheim, I had been on a tour bus going through the town of Molde that looked so deserted on a Saturday evening that, as our tour guide remarked, "People might wonder whether the inhabitants have been abducted by aliens!"  Her comment came back to me -- and so too certain memories of my visits to Germany in recent years -- when I strolled around Trondheim when the MS Richard With docked at the port of the city of some 184,000 people the next day.

As I made my way to the city center, I didn't see any other people besides those who were pretty obviously fellow passengers for the first 25 minutes at least.  In that time, I also had failed to see a single store open for business, bar for a 7-Eleven; heck, even the local Tourist Information Office turned out to be closed on Sundays (like the day happened to be)!

It wasn't until I got near the Nidaros Cathedral that I saw other places that were open for business.  More specifically, the city's Anglican church was accessible to visitors while a service was taking place at Nidaros Cathedral at the time that I was in the vicinity, and the cathedral's gift shop was also open to the public.

However, the Archbishop's Palace next door to the cathedral, which houses the Norwegian crown regalia, and its associated museum were closed until after the MS Richard With left Trondheim that afternoon.  So I had to content myself with checking out the buildings' exterior.

Also, rather than go inside the grand place of worship while a service was taking place, I elected to walk around the building and admire its highly decorated exterior (on which could be seen lots of stone carvings, including some amazing looking gargoyles).  And so interesting were the sights on view that I ended up spending quite a bit of time slowly circling around the building with my eyes (and camera) scanning above me to catch some particular sculptural piece, and nook and cranny, before leisurely making my way back to my ship via a different route from the one that I had used to get to the cathedral.

A few meters north of the Gamle Bybro, I came across what appeared to be the liveliest part of Trondheim that Sunday morning.  Although the weather was not especially ideal to my mind (what with the weather being on the cool side for June and the cloudy gray skies threatening to heap rain onto those of us below), the members of the local populace who had gathered for what looked to be a weekly Sunday outdoor food and crafts market seemed quite able to create a pretty good atmosphere and looked to be enjoying themselves quite a bit.

Detouring to have a quick look, I noticed that yesterday's tour guide may have had a point when she announced that Norway's national dish is (now) pizza!  And it's true enough that even while I didn't have pizza that day (or, for that matter, at any meal served over the course of the cruise), it also was the case that my mother and I did end up eating some pizza before we left this Scandinavian country whose waters (also) do yield some amazingly delicious seafood! ;b
Posted by YTSL at 10:40 PM