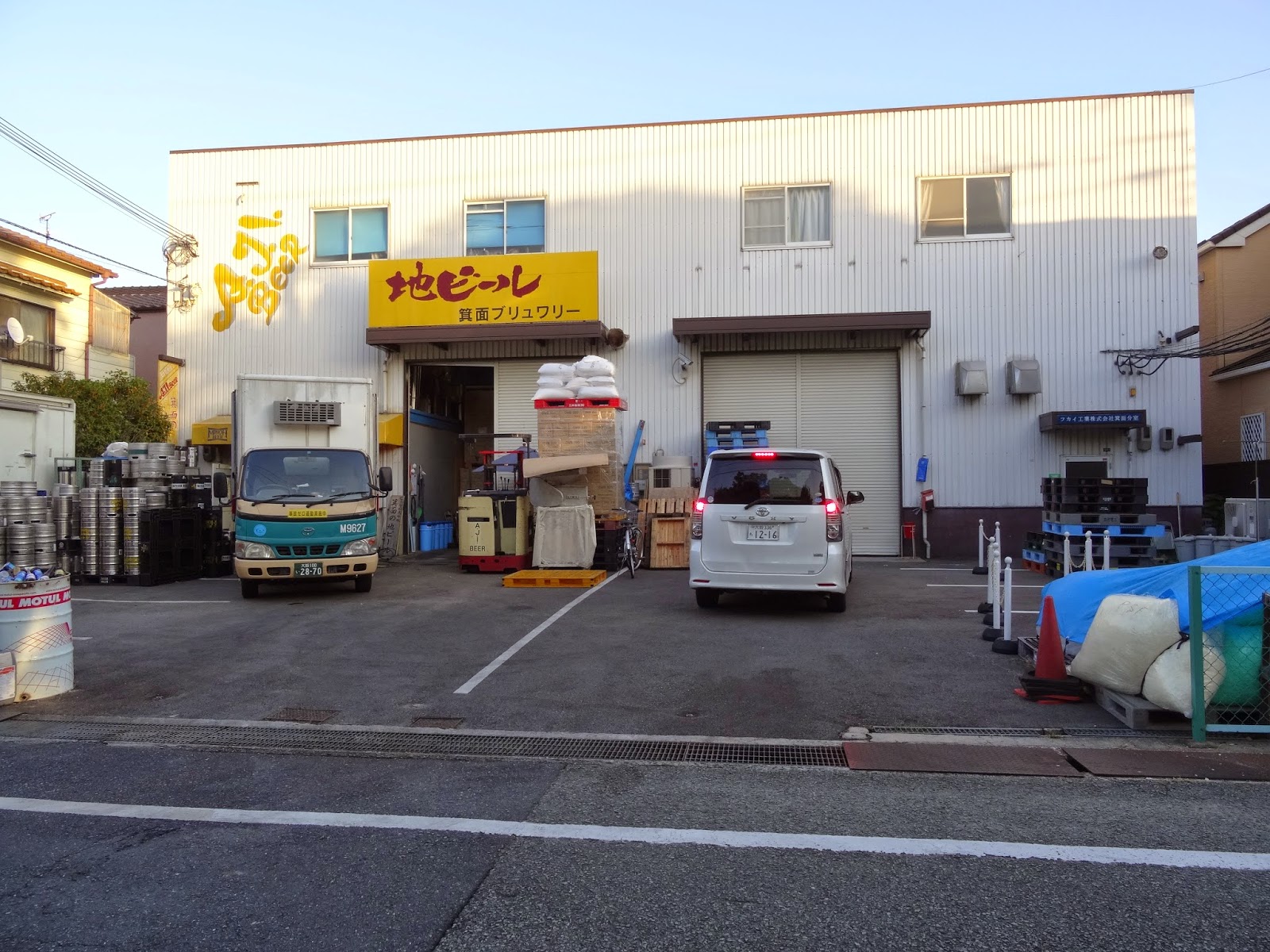 In this modest looking building, amazingly good
craft beer is brewed and available on tap! 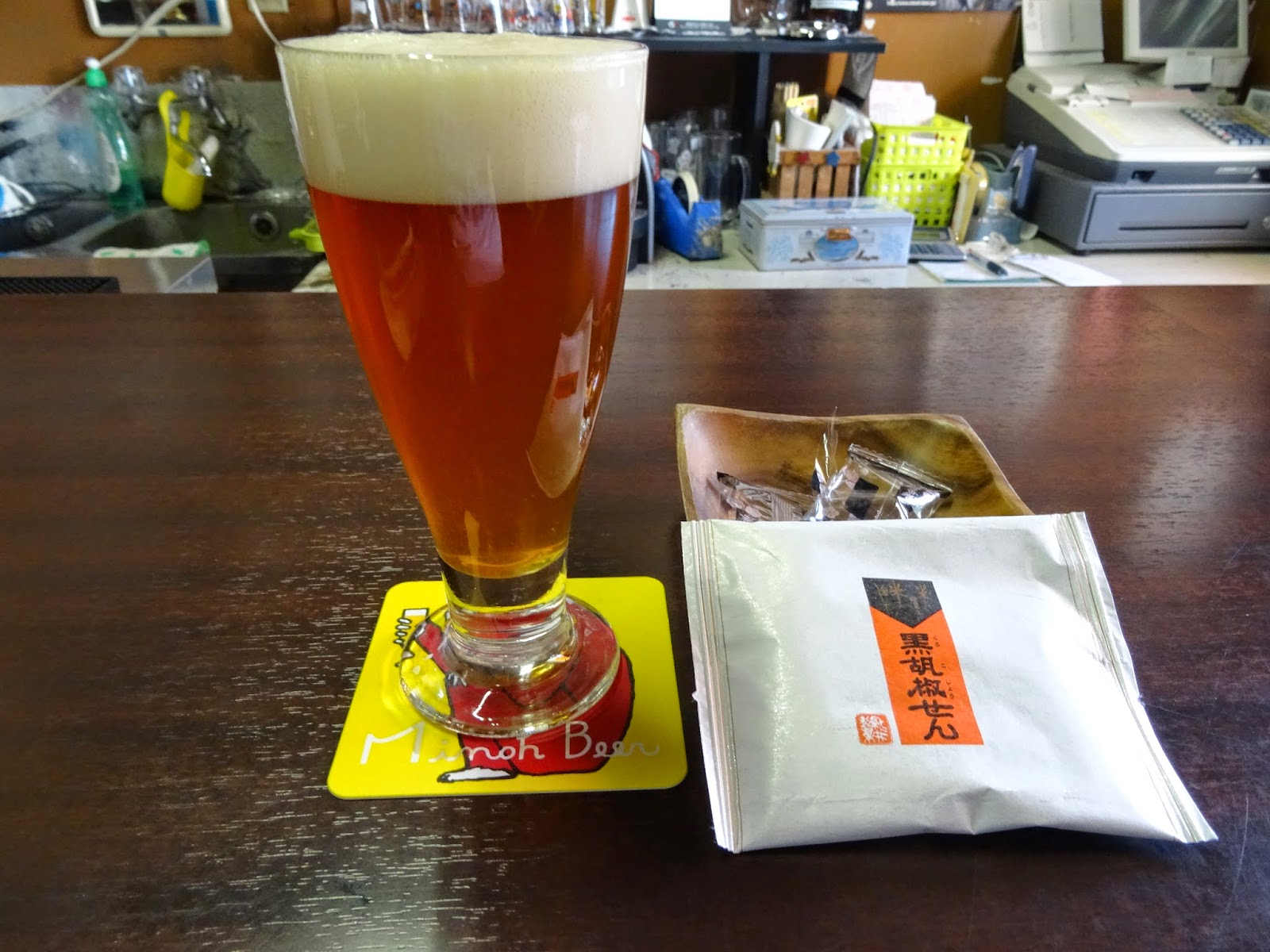 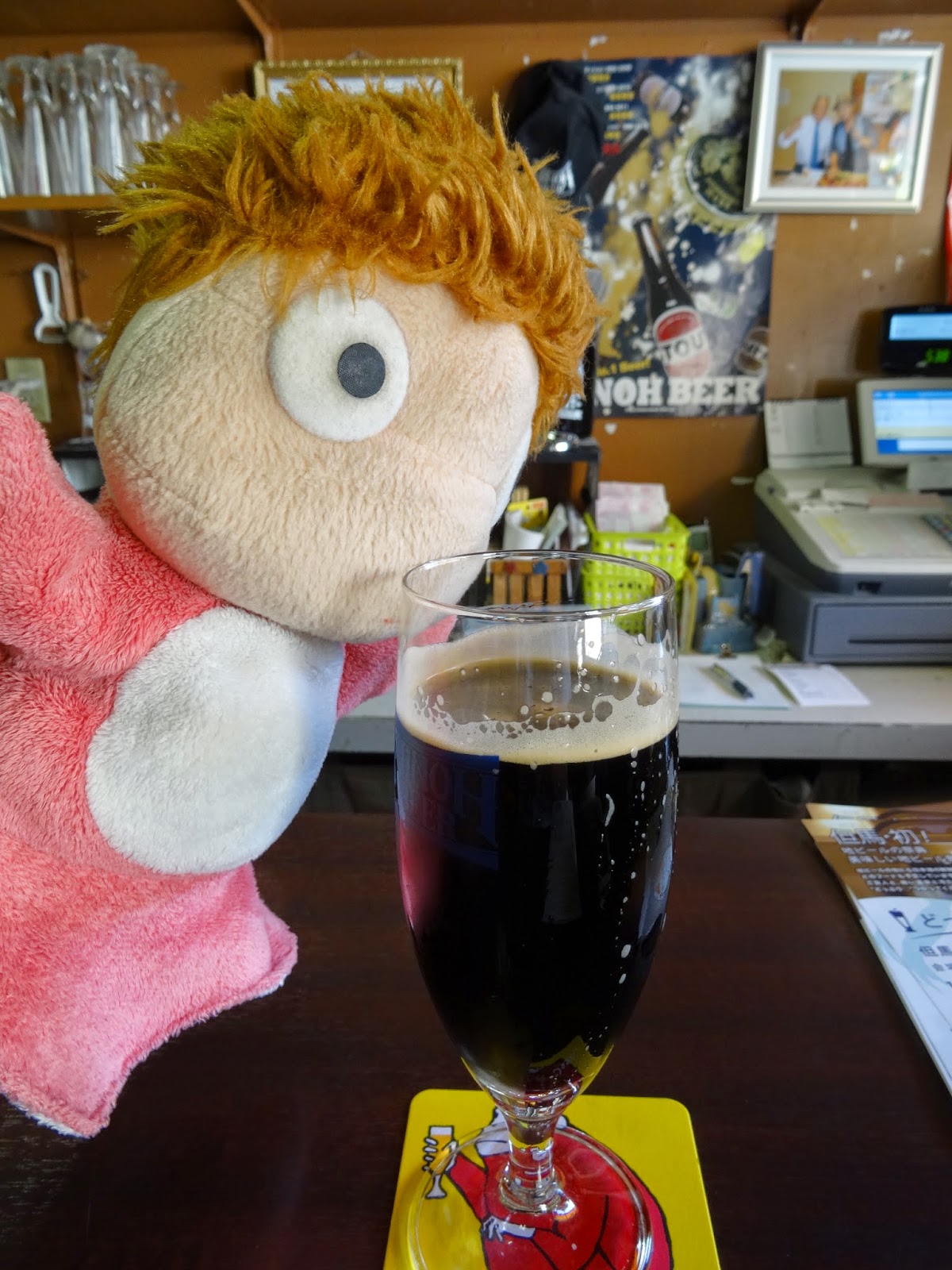 Puppet Ponyo decided she wanted to get a whiff --
though not taste -- of Minoh Beer's award-winning stout! 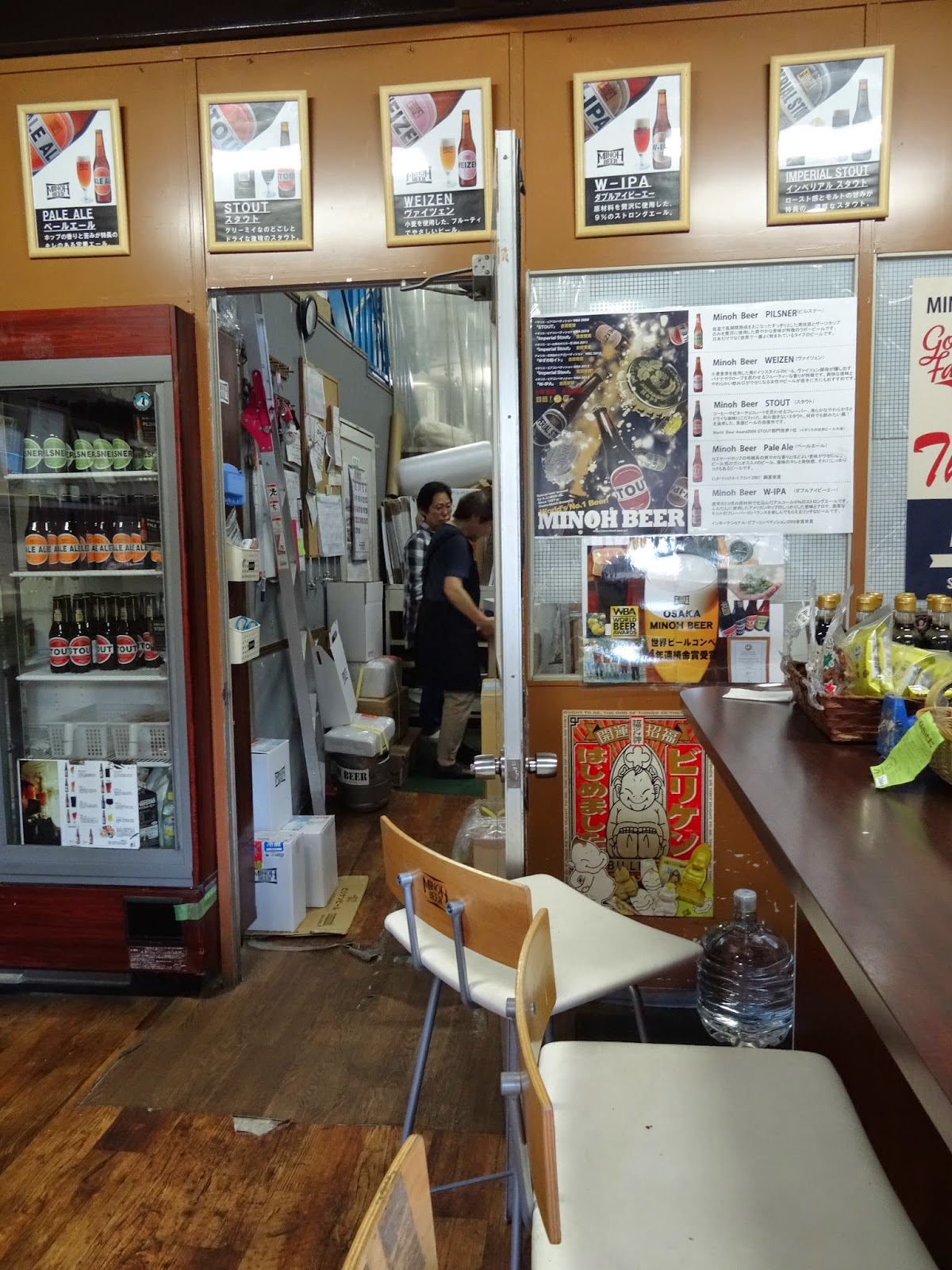 The bar area's smaller than Koyoshi Sushi's,
and there regularly are more people making than
buying beer in the place most of the time!


Before heading back to Osaka after visiting Minoh Park, there was another area attraction I wanted to check out: the home of Minoh Beer, a Japanese craft brewery whose creations a friend of mine had raved to me about after he tasted some of them on a visit to the Land of the Rising Sun.  And although the directions I had for it were on the vague side, with the help of two friendly Minoh area residents, I was able to successfully find the brewery located on what is more like a country lane or suburban alley than main road or street in town.


All in all, I'd estimate that it took about half an hour to walk from the nearest train station to the home of Minoh Beer, so I definitely was thirsty and looking forward to trying out the microbrews on offer.  Walking into the Minoh Beer building, I was a bit shocked to see that the bar area was on the small side -- as in, if memory serves me right, it had a maximum of just six seats!  Also, while Minoh Beer makes several kinds of beers, there were only two taps at the bar -- but as I was to find out, oh my re the quality of the beers that were on tap there!!


I decided to try the lighter colored of the two beers on tap first -- and although the W-IPA still was a pretty hefty 9% ABV, it was so smooth and tasty that it went down really easily.  Next, with little hesitation, I ordered a glass of the stout -- which while only 5.5% ABV, tasted amazingly rich, thick and strong!

So amazing -- even revelatory -- were the beers that I decided I needed to have a second round of both the W-IPA and stout.  At this point, the woman behind the bar got to realizing that I was a serious drinker and beer geek... and started enthusiastically plying me with free snacks (rice crackers, sweet cookies, etc.!)  And despite my lack of Japanese fluency and her lack of English fluency, we somehow got to chatting a bit, and she got pretty excited when she found out that I had come from Hong Kong and knew to look for -- and was able to find -- the Minoh Beer brewery.

Around the time that I was happily drinking my third glass of beer of the afternoon, a very friendly couple came in and sat themselves at the bar.  We got to talking and I found out things like that he worked for a company affliated with Suntory Beer and that was the beer that he normally drank but he had recently heard about this microbrewery that was close to their home, so decided to check it out -- at which point they, and also the woman behind the counter once more, expressed their amazement and happiness that I knew about and liked Minoh Beer!

Established in 1996, Minoh Beer is operated by three (originally two) sisters -- yes, women! -- whose liquor store operator father decided to start a microbrewery and put them in charge of it.  I never was able to determine if the woman pouring the drinks behind the bar was one of the sisters -- or a relative -- but she definitely did take proprietory pride in the beers and appeared genuinely happy to see me getting ecstatic over what are the best Japanese beers I've ever drank!

As I told her (via my two new English-speaking friends), I really hope to see -- and drink -- Minoh Beer at the next Beertopia (which, sadly, has been postponed to October rather than take place in March, like last year).  In the meantime, I'll treasure my happy memories of my visit to Minoh Beer -- and so too will Puppet Ponyo, who popped out of my backpack after my fourth glass of beer of the afternoon had been poured to say hi to some new friends and also check out the great beer along with the cosy surroundings :b
Posted by YTSL at 11:20 PM

A thorough and vivid description of your "Beer Geek" experience at Minoh Beer. You sound like a friendly sort of traveler who makes an attempt to surmount the language barrier and communicate with the locals...As for Puppet Ponyo, just the "whiff" of the dark brew might have given her a pleasant "high."

Sometimes, I make an effort to talk to locals. Other times, there's something about me that seems to make people want to approach me to talk!

As for Puppet Ponyo: I think her happiest alcohol encounter continues to be at the evening we were at Sasagin... ;)

Looks like good times and for Puppet Ponyo too! And by the sound of it a delicious brew! Bonus that two ladies started the company. I like to hear about female entrepreneurs especially in perhaps a non traditional business, at least I tend to associate brewing beer with the gents. Cheers!

Yeah, good times -- and I'm happy to recount and recall it, even close to 6 months after it happened! ;b

And yeah, I tend to associate brewing beer with men too -- even though I definitely do know that women as well as men can enjoy drinking beer. :)

Happy International Women"s Day to all ladies!!
I don't drink beer but this seems a good place to explore and gain knowledge. Ponyo is lucky to travel to interesting places with you :)

Didn't realize it was International Women's Day today until you told me!

Re this blog entry: it could be a celebration of women since Minoh Beer's brewers are female! :)

Ah ... this sounds like the Japanese beer I'd really appreciate but have never run into! While I don't usually drink much IPA (prefers trappist or dark lagers personally), that 9% W-IPA seems really interesting.

I don't think I've met a Minoh Beer beer that I haven't liked yet. Also watch out for Far Yeast Brewing Company's Tokyo Blonde (there's an Export version that's on the hoppy side) and Kagua beers. Like those other Japanese brews a lot too! ;b