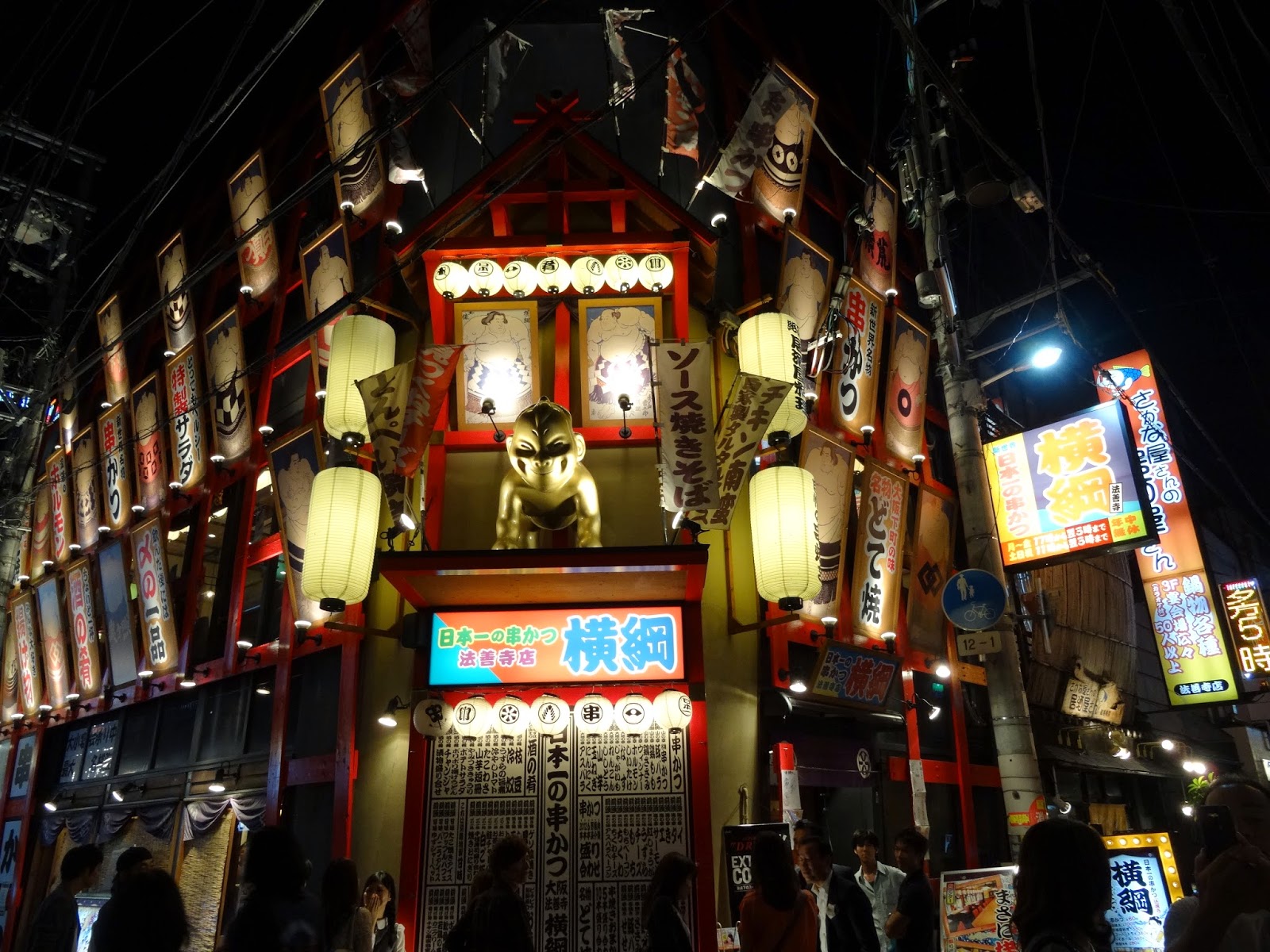 Surely it isn't just me who finds this Dotonbori eatery's
decor to be on the intimidating side? 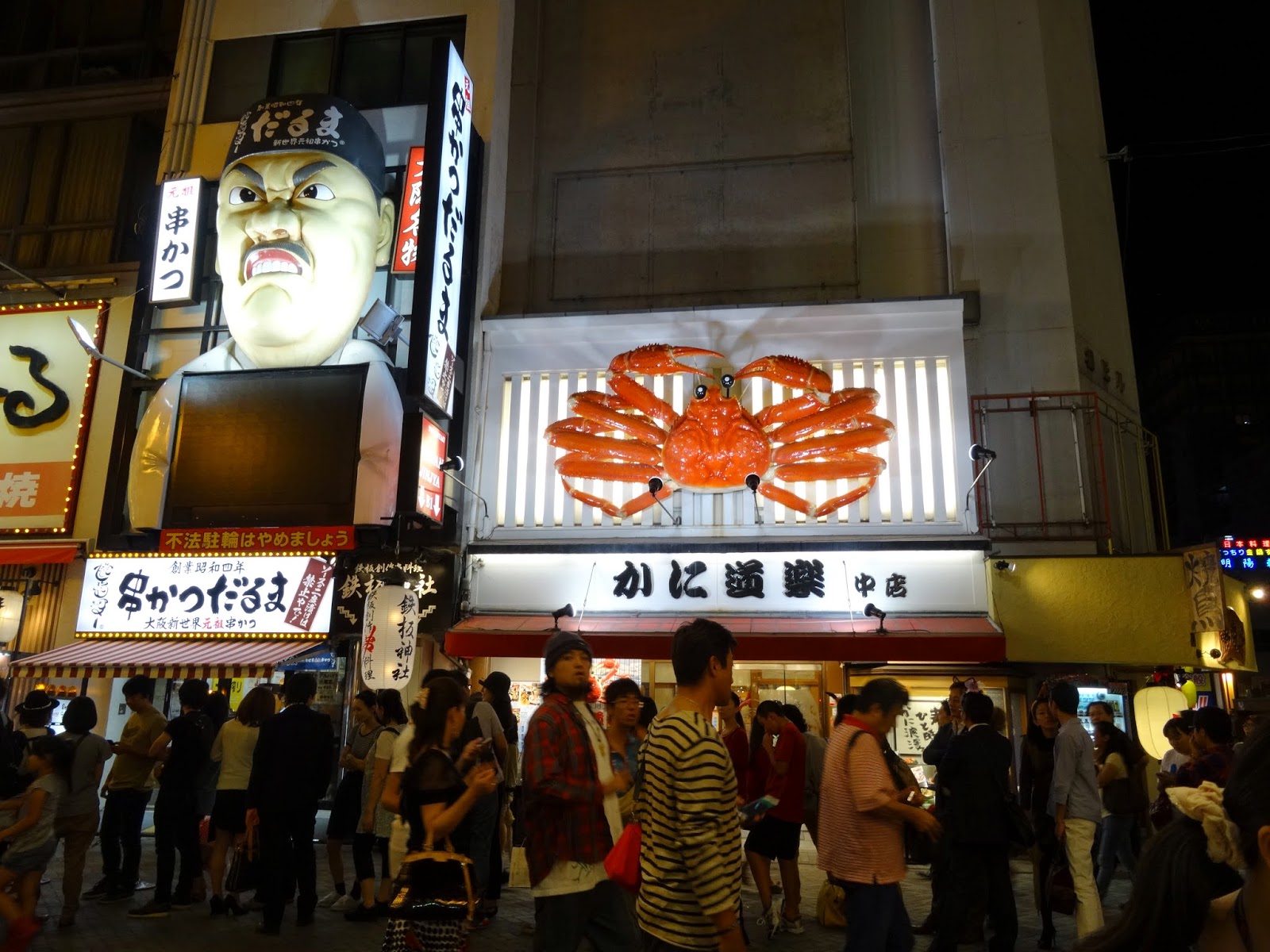 Some might find the face of Daruma's company president
and chief spokesman, Ueyama-kun, to be scary too... 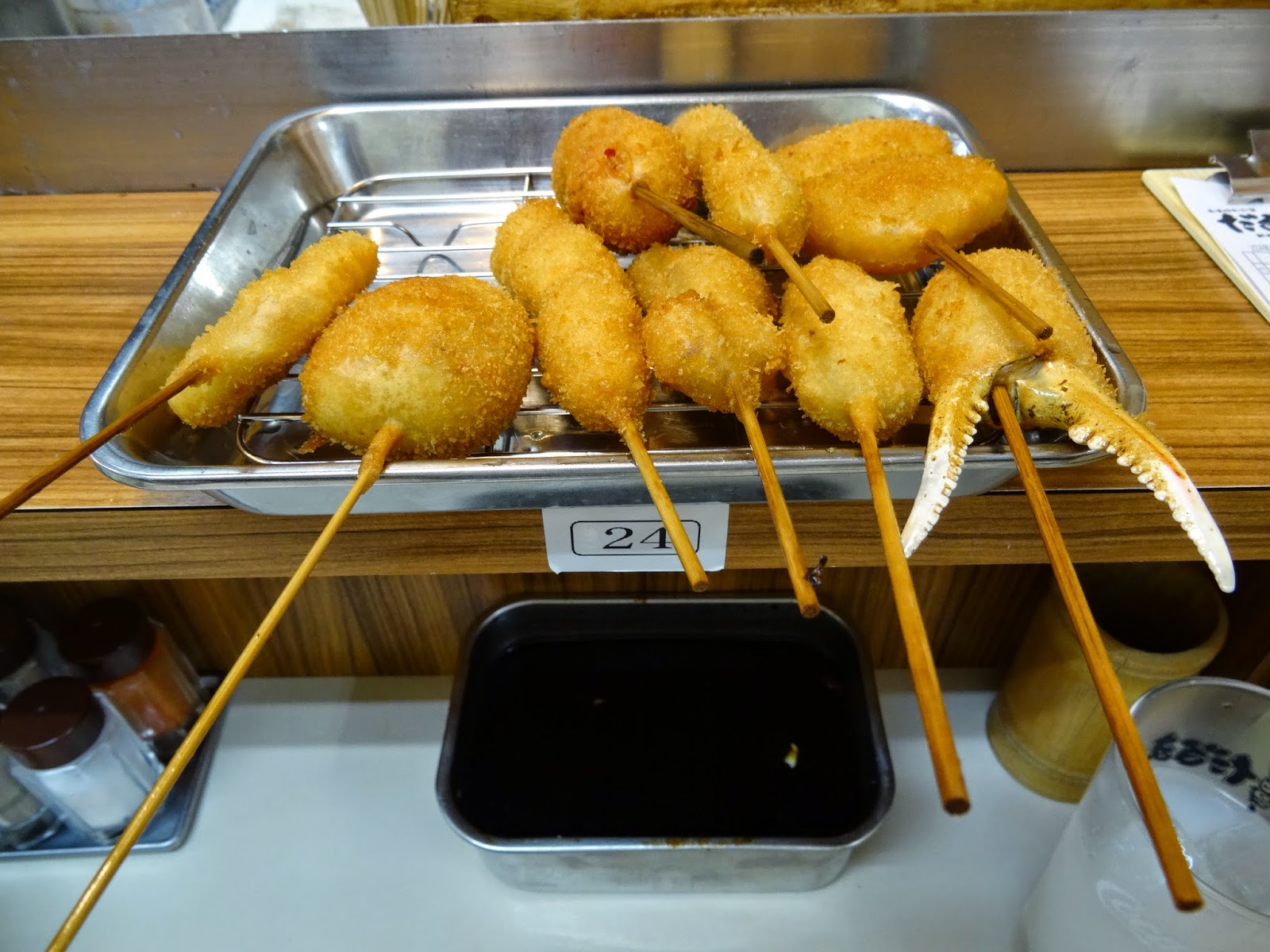 ...but I had no hesitation to get in the queue to enter the restaurant
as I knew what tasty treats would be waiting for me inside! :b

On the final evening of my great Japan vacation of September 2014, I made my way to Dotonbori -- an area of Osaka that I've made a point to visit every time I've been in Osaka.  Yes, it's super garish and ultra touristy, and crowded too.  But I don't mind because I know I can find delicious foods there, including some I have difficulty finding in Hong Kong.

Compared to everywhere else that I've lived, Hong Kong is a Japanese food lover's paradise.  Like the Land of the Rising Sun itself, Asia's World City is home, after all, not only to specialist -- and very good -- sushi-ya, yakitori-ya and even a mentaiko (spicy pollock roe) restaurant, fine dining establishments serving kaiseki, myriad izakaya and more -- rather than the generalist Japanese (or, worse, "Asian") restaurants that are the norm in much of the rest of the world.
But thus far, I've only come across one Japanese restaurant in Hong Kong that offers up a variety of kushiage -- deep fried sticks of goodness that might be best described as a cross between tempura (battered, deep fried foods) and kushiyaki (grilled skewered foods) -- and it's not only not as good as Osaka's iconic Daruma but its kushiage is -- like most Japanese food in Hong Kong compared to Japanese food in Japan -- pricier too!
Especially after tasted the kushiage on offer at Daruma, I find it really difficult to understand why kushiage is not more popular in Hong Kong or, for that matter, anywhere else in the world.  All I know is that I was introduced to kushiage several years later than I was to more internationally well-known Japanese foods such as sushi, tempura, teppanyaki and sukiyaki -- and now kushiage is one of the top things I look forward to eating when I'm in the Kansai region of Japan, of which Osaka is the largest city.
This time around, my kushiage eating experience at Daruma was made even better by my having found that the restaurant has an English menu!  And while it's indeed more economical to order their sets, this time around I happily made a la carte choices -- and ended up with such as crab kushiage and mentaiko kushiage; both of which I'd highly recommend, especially to those who already like those items in non-kushiage form! ;b
Posted by YTSL at 7:59 PM

I can understand why you've blogged about Dotonbori more than once. It looks like a great place to drink beer and go restaurant hopping - for both tourists and locals alike. I've visited other online sites and one described Dotonbori as an "amusement park of food."...I would like to try the Tako Yaki because I love octopus. I would also like to sample the Kani Miso (with crab brains among its ingredients).

Reading this blog of yours could be from a glittering food kingdom dream!

The first time I went to Dotonbori (with my parents and a family friend back in 2008), I did go restaurant hopping. If memory serves me right, that evening, we had crab at Kani Doraku, fugu (blowfish) at a fugu-ya and takoyaki from a street stall.

The following blog entry has a photo of Dotonbori takoyaki:-
http://webs-of-significance.blogspot.hk/2008/06/octopi-in-osaka.html

And FWIW, kani miso is my favorite sushi topping of all! :)