Memories of lighthouses, including those on Norway's rugged west coast 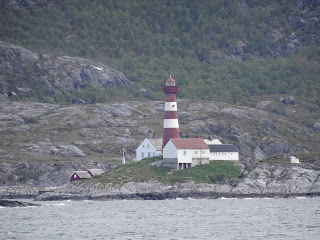 One of many (hundreds?) of lighthouses seen
on my journey from Bergen to Kirkenes and back again 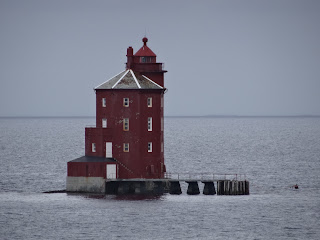 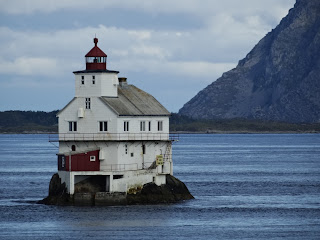 ...but I reckon that the Stabben Lighthouse is more picturesque :)

Although it was only last month that I climbed up to the top of a lighthouse for the first time (at Japan's Cape Hinomisaki), these navigational aides for maritime pilots have long fascinated me; this not least because, in my childhood, I had read stories in which lighthouses and heroic characters featured, such as the true tale of Grace Darling, the daughter of the lighthouse keeper at Longstone, and Five Go to Demon Rocks, one of the books in Enid Blyton's "Famous Five" series.
For all of my literary familiarity with English lighthouses, however, I can't recall seeing any of these structures having caught my eye in all of the time that I spent in the native land of the bulk of the authors whose books I read as a child.  On the other hand, the Muka Head lighthouse on my home island of Penang -- which, incidentally, was built by the British -- was one that caught my imagination as a child.  And as an adult, I loved the look of the lighthouses I spied on a visit to North Carolina's Outer Banks and have taken note on occasion of other lighthouses I've come across during my travels and, also, while hiking in Hong Kong.
Still, it wasn't until I went cruising along the Norwegian's rugged western coastline with Hurtigruten's MS Richard With that I got to really appreciating the aesthetics of various lighthouses -- and discovering that there really are lighthouses that look like what you'd expect to see when you first hear the word.  Put another way: whereas I had previously only seen lighthouses that were tall towers or rectangular in shape and similarly "un-house-like", I could well imagine people -- even a family -- fairly comfortably residing in such as the lighthouses as Kjeungskjaer and Stabben!

The fact that there are over 150 lighthouses in Norway -- along with some 5,000 navigational lights -- give a good idea of how rocky and potentially treacherous the Norwegian coast is.  It also shows how much of a commitment the authorities have made to try to make the waters off Norway safe for those who travel in them (including its fishing community).  And while I didn't see any of these lighthouses' lights on since I was traveling there at a time when Norway's the Land of the Midnight Sun, I can definitely imagine feeling reassured at the sight of the beams of their lights on dark nights out at sea.
Posted by YTSL at 9:18 PM

The two bottom photos are of unusual looking lighthouses that also look like residences...Lonely looking outposts for sure, but very haunting, with potential to stimulate the imaginations of creative storytellers.

Reportedly, one can rent space in some of these Norwegian lighthouses these days for short vacations. I'm not sure that's for me though. I'm content to just view them from a passing ship! ;b