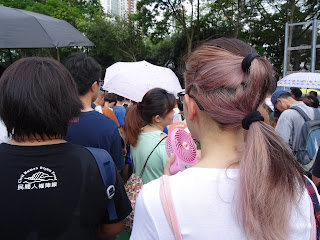 This afternoon, many people sweated buckets but patiently waited
-- sometimes with portable fans in hand -- to get out of
Victoria Park to begin today's July 1st protest march 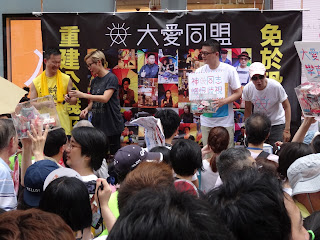 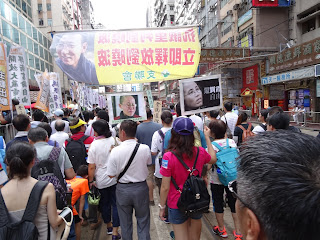 And because we're not in Mainland China, we are free to
protest the detention of Liu Xiaobo and the house arrest
and general ill-treatment of his wife Liu Xia


The numbers game is being played again this evening between the organizers of the annual July 1st march here in Hong Kong and the police; with the former estimating that 110,000 people took part in today's protest rally and the latter suggesting that only 19,300 turned out.  But as far as this person who did assemble at Victoria Park this afternoon and took around 3 hours to walk all the way to Admiralty while surrounded by a thick crowd of people is concerned, what cannot be disputed is that a whole heck of a lot of Hong Kongers turned out today in punishingly hot and humid weather conditions to register to make their voice heard about a whole range of causes, including gay rights, children's rights, environmental rights and, of course, the fight for democracy and against 689.


To be sure, I did feel concerned when I turned up around 3pm at Victoria Park and saw that its football pitches weren't all filled with people -- the way that I've come to think of as normal on June 4th as well as July 1st.  But by the time the friend I was with and I got out of Victoria Park at around 3.30pm, a sizeable crowd had gathered around us -- and I also knew of several people who had decided that they'd join the protest march at later points along the way as they wanted to avoid having to wait for frustratingly long periods of time at Victoria Park before getting onto the street.


Although I wish I could forego having to stand for a time under the hot blazing sun at Victoria Park waiting for the march to get underway, I've always gone ahead and gone to the assembly point because I don't want to give the police and such the excuse of not adding me to their count.  Even so, thoughts of numbers seemed so insignificant when I spied young children, people in wheelchairs and people who had obvious difficulties walking but still decided to take part in today's protests marching along with me to Admiralty.  Put another way: every vote counts but I do reckon that some people obviously make more sacrifices than others for the cause, and witnessing their efforts cannot help but get me feeling emotional and like there's a lump in my throat!


Another group of marchers who got me all choked up were those holding banners and posters in support of Nobel Peace Prize winner Liu Xiabo -- who, lest we forget, has been detained by the Chinese government since 2008 -- and his wife Liu Xia, whose greatest "crime" appears to be her continued loyalty to, and love of, her husband.  For one thing, they reminded me of people living in Mainland China who have the misfortune to be living under the rule of an intolerant, undemocratic government that seeks to crush admirable people rather than listen to them or just plain allow them to peacefully espouse what they believe.  For another, they moved me to tears by making use of -- and thuse reminding people that we do indeed still possess -- the valuable freedom and rights they do have here in Hong Kong to make sure that we don't forget those unfortunates.


Although my leg muscles ached and my fingertips actually felt swollen (because of dehydration even though I had drank more than one liter of liquids along the way!) by the time I completed the march, my spirits remained high throughout.  Among other things, I felt good seeing many other people out there on the streets this afternoon.  And it also was cool to come across recognisable faces -- such as those of Denise Wong, Anthony Wong Yiu Ming, legislators Audrey Eu and Tonya Chan, activists Joshua Wong, Benny Tai and Ken Tsang, etc. -- out in force today.

In addition, there were the folks who treated us to renditions of such as the Umbrella Movement anthem which I find musically lyrical as well as emotionally evocative.  And yes, I still do very much find the following lines to be very pertinent and powerful:-

...We are not unafraid
of what might happen next...
But our lives have reached a tipping point
Keeping silent is more terrifying...
Fear will only lead us to a bleaker future...
Hold up our umbrellas
Let's support each other
Although unsettling, we're not alone
Hold up our umbrellas
Put our hands up
Let's fight for what we deserve
with courage...

It is amazing that so many people showed up in such blistering hot weather but I'm glad to see so much support of this beautiful city.

What never ceases to amaze me as well as the goodwill and good manners frequently on show at protests in Hong Kong. And it was nice to see tempers NOT fraying despite the heat and humidity yesterday! :)