Chillin' out on a hot afternoon at the Lan Kwai Fong Beer and Music Festival :) 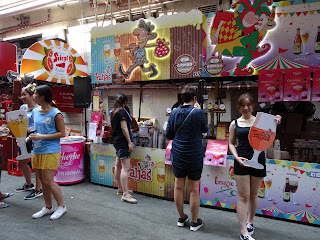 There were beers and stalls that relied on good-looking women
to attract people at the Lan Kwai Fong Beer & Music Festival... 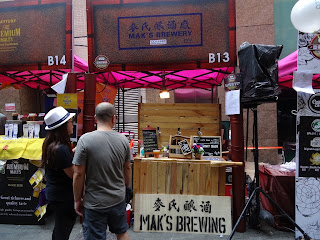 ...but there's no question that there also were
some tasty brews out there... 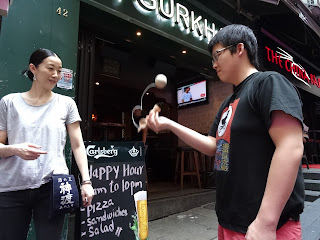 
Not too long ago, I made a point to steer clear of what's considered to be Hong Kong's Party Central.  But that was before I became a regular at Sake Bar Ginn -- and also after Lan Kwai Fong passed its partying mantle to other parts of Hong Kong (including nearby Wyndham Street).  Nonetheless, Lan Kwai Fong's not giving up its claims to being a majorly boozy part of Hong Kong without a fight.  Hence its continuing to play host to an annual beer and music festival that may well be the Big Lychee's closest equivalent to an alcoholic block party.


After attending what may well have been the most demanding beach cleanup that I've taken part in yesterday on account of the temperatures being on the super high side and learning that the weather was forecast to be on the unpredictable side on account of an incoming typhoon, I decided to opt against going hiking today in favor of going for the first time ever to the Lan Kwai Fong Beer and Music Festival.  Expecting things to be crazy after darkness falls, I chose to go in the middle of the day, when the sun was shining and the crowd (hopefully) would be on the thin and mellow side.


A few minutes after I arrived at the fest, I saw a friendly as well as familiar face.  And as it so happened, I ended up hanging out with a few chef friends (including the genius responsible for creating such as a pie to die for with shirako in it at Godenya) over at the stall manned by Sake Bar Ginn stuff that was selling takoyaki (octopus balls) and a slushy sake cocktail along with draft Kirin beer.

Without going out of their way to do so, I felt that they ended up recreating a corner of Odori Park, where my mother and I spent some enjoyable hours in one beery summer in Sapporo.  For even as the alcohol flowed, the mood was mellow, the attendees included a couple whose six-month-old baby happily smiled, gurgled and otherwise acted cute for the entire time that they were there, and far from completely soused adults regressed to childhood by playing with a kendama as well fixating on Pokemon Go!

All in all, I had a better time at the Lan Kwai Fong Beer and Music Festival, and spent more time (and money!) in Lan Kwai Fong this afternoon, than I expected.  And while it's no Beertopia in size and beer quality, the truth of the matter is that I did find sufficient drinks (along with food) to keep me happy for a few hours: including an unusual seasonal mint beer from Mak's Brewery, and a tasty peach cider by local micro-brewer David Leung that seems to be pretty experimental -- as in not yet available in any bars but hopefully will be before too long! :)
Posted by YTSL at 10:28 PM