The Duk Ling appeals to heritage buffs as well as tourists! 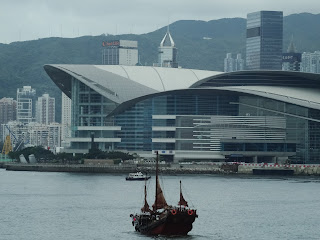 Old and new in the same frame in Hong Kong today :) 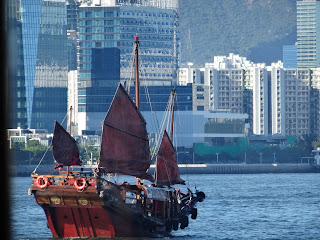 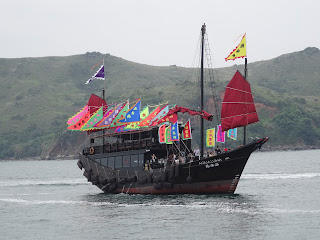 And while the Aqua Luna looks old and cool,
do not be fooled into thinking it's a real sailing ship!
Among the items on display at the Hong Kong Maritime Museum are a number of historical paintings and photographs showing Victoria Harbour and the land bordering it.  Even for someone like me who has lived in the Big Lychee for less than a full decade, those pictures can bring on a wave of nostalgia since so many changes take place to the physical landscape from year to year (and sometimes even month to month), including acres of land reclamation as well as the coming into being (and destruction) of a number of buildings.
While viewing those images this afternoon, a museum staffer pointed out that it's not only the landscape around Victoria Harbour that's radically different these days but also the vessels that ply its waters.  Amusingly though, just minutes after she remarked on how it's pretty rare to see a traditional junk (complete with red sails) sailing in these waters these days, we spied the Duk Ling -- Hong Kong's sole authentic sailing junk -- doing just that!
Built in Macau in the 1950s and used as a fishing boat for the first decades of its existence, the Duk Ling has more recently served as a tourist attraction over here in the Big Lychee (and featured in various movies, including Dragon: The Bruce Lee Story).  Previously, when it was chartered by the Hong Kong Tourism Board, rides on board this traditional Chinese vessel was free of charge.  These days, however, one has to pay quite a bit to sail on what may well be the last real Chinese junk ship to ply these waters.
On a visit to Hong Kong before I moved here, I had booked to sail on this iconic vessel with my mother and two friends.  Unfortunately, the day that we were scheduled to go on the junk boat ride, typhoon warning signal number 3 was raised and the ride was consequently cancelled.  Then after I became a Hong Kong resident, I learnt that rides on the Duk Ling were limited to visitors to the Big Lychee!
In the past year or so though, rides on board the Duk Ling have been made open to anyone willing to pay for the privilege of doing so.  And whenever this heritage buff sees this photogenic wooden vessel floating about in Victoria Harbour, she does get a yearning to cruise around on it one fine, cool and clear day in the not so distant future... ;b
Posted by YTSL at 11:40 PM