No regrets post viewing No Regrets for Our Youth (film review) 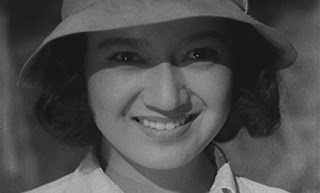 The luminous star of Akira Kurosawa's
No Regrets for Our Youth

Mention the name Akira Kurosawa to the average cinemagoer and chances are that, if they know any works by this great filmmaker, it'll have samurai in it.  But even though the first Akira Kurosawa movie that I viewed did indeed have samurai in it, I've also seen my fair share of films by this cinematic giant that don't -- including the elegiac Rhapsody in August along with his two directorial efforts that I've had the privilege and pleasure to view on a big screen in recent months.

A few weeks after I caught a screening of Sanshiro Sugata, Akira Kurosawa's stunning debut directorial effort which tells the story of a powerful young judoka of the Edo era, I was able to attend a screening of a very different work which he helmed just three years later.  The first film that the master director made after the Second World War, No Regrets for Our Youth is an ambitious drama with important political messages whose protagonist is that very rare thing in an Akira Kurosawa movie: female!

Based loosely on real-life events which took place in the years leading up to and during World War II, its stirring story begins in 1933, when the film's lead character, Yukie Yagihara (played throughout the movie by Setsuko Hara), was still a sheltered schoolgirl, dotted upon by her Kyoto University professor father (Denjiro Okochi)'s senior students as well as her loving parents.  All too soon, however, Yukie's private idyll is shattered by the rising militarism besetting her nation; whose consequences include her father being suspended from teaching because of his anti-fascist views, and the subsequent university-wide protests against the curtailing of academic freedom organized by students sympathetic to her father being put down by armed government forces.

Although her instincts looked to be to bury her head in the sand, Yukie's eyes get opened to the political problems enveloping the country by events that practically affect her nearest and dearest.  At pretty much the same time, her heart gets won by Noge (Susumu Fujita), the strongly idealistic leader of Professor Yagihara's senior students whom she had spent a good bulk of the time heatedly arguing with but, it turns out, also actually seriously paying attention to.

More domestic and overtly political than many other Akira Kurosawa films, No Regrets for Our Youth really takes off in earnest after Yukie and Nogie meet as adults years later in Tokyo, and soars onto a seriously high plain after she goes to Noge's home village to help out his suffering peasant parents.  And perhaps its makers' greatest strength, if not outright genius, is to decide to show political oppression and resistance through the eyes and experiences of not the usual mature male suspects but, rather, a female in the flower of youth who voluntarily opts to make great sacrifices that result in major changes to her life, status and circumstance -- all the while determined to have no regrets for what she feels compelled to do as a result of romantic love and personal duty.

Also absolutely inspired was the choice of Setsuko Hara to play a character who goes over the course of this film from privileged schoolgirl to a noble woman doing back-breaking work out in the muddy fields for hours on end.  Susumu Fujita impresses too with his ability to breathe life in a character that, in less capable hands, would be too admirable to be believable.  But there's little question that it is its lead actress' bravura performance which is the dramatic anchor of No Regrets for Our Youth, and adds considerable poignancy to a powerful story for the ages.