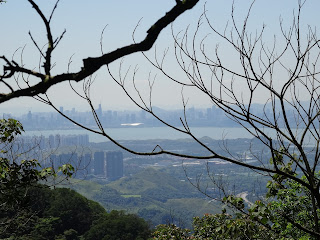 How cool is it that one can see clear across to Shenzhen from
Tai Lam Country Park on super high visibility days? :) 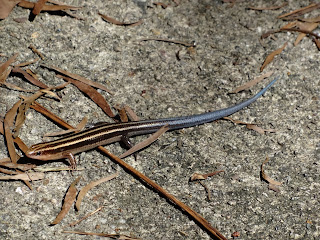 On the hiking trail itself, one may spot cool critters
like this beautiful blue-tailed skink :b 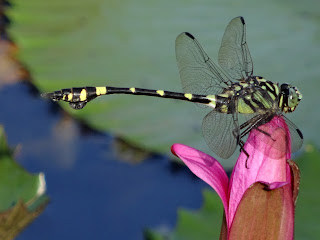 I also love that I was able to snap this photo of
this dragonfly resting on an unopened lily flower :)
Despite my best intentions, I haven't hiked as often as I would like -- and probably should -- this summer for one reason or other.  But I think I went some ways to rectifying the situation by spending a good part of this afternoon happily tramping about in Hong Kong's second largest country park with a friend this afternoon even though the mercury ended up rising to 36.5 degrees Celsius in some parts of Hong Kong.
One reason why I was more willing to venture out into the countryside today than in previous weeks was that the air felt considerably less polluted than when Super Typhoon Nepartak was in the neighborhood.  And even though it was still super hot this afternoon, the air didn't feel as thick (as well as dirty) as a few weeks ago and the humidity levels didn't seem as terrible.  Consequently, it actually didn't feel at all unpleasant in the shady areas -- of which there is a lot of in this well forested part of Hong Kong (where afforestation measures have been put into practice as far back as 1952).
Although there was lots of tree coverage for much of the hike, there still were sections of the trail where wonderful vistas would open up and give us a good taste of how far we can see -- and how beautiful Hong Kong is -- on a super high visibility day.  Actually, at various points in the hike, one also could peek through branches and catch sight of Shenzhen to the north when walking along the ridge that cuts through the country park as well as various sections of the Big Lychee (including Tai Mo Shan, various Kowloon hills (including the very distinctive Lion Rock), a good part of Hong Kong Island, Castle Peak and even the peaks of Lantau).
In addition, there were the cool critter spottings I've come to expect of a summer hike in Hong Kong.  Not only were many varieties of butterflies and dragonflies out in force today but I also caught sight of large and small spiders galore, reddish as well as green grasshoppers, a beautiful blue-tailed skink, and a stick insect whose attempts at camouflage wasn't as good as the numerous leaf insects that I'm sure reside in Hong Kong but which I don't have too much success spotting in the wild!

And lovers of water lilies should make a beeline for Parents Farm over in the village enclave of Tsing Fai Tong.  The very first time I visited this picturesque spot around nine years ago now, I was floored by the lily-filled ponds I found there.  So imagine my disappointment when I passed through that same area a few years later and found the place seemingly abandoned and overgrown; and then imagine how happy I was to discover on more recent hikes to this part of Hong Kong that someone looked to have revived the place -- and made it a welcoming spot complete with a cafe offering drinks and snacks, some signs of agricultural work being undertaken and ponds full of lilies once more -- which, as a photographic bonus, seem to attract their fair share of dragonflies.
However bucolic Parents Farm looks, I must confess to not lingering that long there though -- because at that point in the hike, I tend to fixate on making it downhill to Sham Tseng, where delicious dinners are to be had.  Almost invariably, my party will head for Yue Kee for a meal that includes some goose.  And while mine may well have been the only table that didn't have goose meat on it this evening, we did have a plate of goose kidneys (yes, really) along with two other non-goose dishes -- all of which I reckon were pretty yummy and satisfying, actually! ;b
Posted by YTSL at 10:48 PM

What a great place to hike and wonderful shots. Your narratives are always so good too.

I remember there used to be a high population of big spiders along the path from the Mac to Tsing Fai Tong a few years ago. Any spider sighting this time?

I'm glad I can give you some idea of how wonderful Hong Kong is for hiking! :)

There were indeed lots of spider sightings on this hike. Some of the webs we saw yesterday were really large and wonderful too, not just the creatures that wove them! ;b

Once I was on that route and had to crash through a very big web as it ran across the only foot path to Tsing Fai Tong, close to a stream. Nearly got a big one crawling onto my back in the process........

That's not as bad as another old trip a few decades ago, along Lantau Trail close to the Big Buddha, when it was still under construction. That time I nearly bump into the net head first....... My arms ended up striking it first. I have no choice but to tear it apart. The web turned into muddy colour upon contacting my skin. I couldn't get the sticky stuffs off even with soap & water. Have to rub them off with tissue paper bit by bit. Fortunately no marks on my skin that time. I have been wondering what if the net hit my eyes......

Oh my re your spider web encounters! About the worst that's happened to me with them is my accidentally walking into one up on Mount Davis and having one of the threads actually go up one of my nostrils. Amazingly, it was so strong and elastic that it didn't break and bounced back out! As you can imagine, I was temporarily shocked -- but fortunately turned out to be otherwise none the worse for wear... ;S