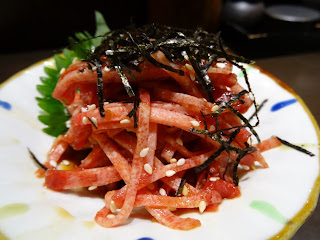 Something I really like eating, especially in hot weather 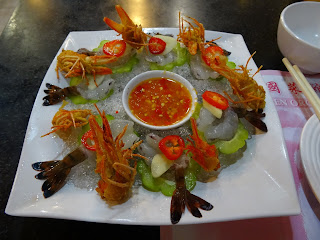 Another dish I find myself craving when the temperature rises


Late last month, the Hong Kong Observatory recorded high temperatures of over 35 degrees Celsius (95 degrees Fahrenheit) on four consecutive days for the first time since record keeping began in 1885.  And the scary thing is that July -- not June -- is normally the hottest month of the year here in the Big Lychee!


Even though I continue hiking through the summer, I have to admit to finding it more difficult to get myself to spend time outdoors on super hot (and humid) days.  And in scorching weather, I also am more reluctant to do such as take air condition-less trams when moving around town as opposed to other modes of transportation that come with air conditioning, and make for the air conditioned sections of ferries and rather than happily enjoy the fresh sea breeze in those sections of the vessels that are either outdoors or have open windows.


Something else that changes in hot weather is my food preferences.  More specifically, I notice myself not only craving ice cream and cold desserts at various points in the day, and cold cereal for breakfast, but also cold -- and often raw -- savory foods; and I don't just mean sushi and sashimi which I'm perfectly happy to eat any time of the year!


Happily, in Hong Kong, my cold savory food options include chilled Japanese soba, udon, somen and ramen, cold Vietnamese rice vermicelli noodle options and Korean naengmyun in addition to various Western and Asian-style salads.  In addition, there are raw seafood dishes from elsewhere besides Japan, and raw meat dishes from elsewhere other than the Netherlands.


In recent years, eateries selling Hawaiian poké also have appeared in Hong Kong and I love that this is the case; with my favorite "go to" place for Hawaiian style raw fish salad being the Central branch of Pololi (which now also has branches in Wan Chai and Sheung Wan).  Still, if truth be told, my absolute favorite non-Japanese raw seafood dish consists of Thai style marinated raw prawns; whose spicy dipping sauce often gets me sniffling but still unable to resist having more of (along with the raw garlic that accompanies the raw prawns)!


And long before I tried ossenworst when I visited the Netherlands at the tail end of last year, I already had been introduced to -- and become a fan of -- steak tartare.  But my favorite raw meat dishes actually are Asian rather than European; with Korean yukhoe being a delicious offering consisting of seasoned raw beef accompanied by a raw egg as well as thin slices of sweet Asian pear, and a variation served at Yi Pai Yai, a Japanese izakaya located in Causeway Bay that specializes in ox tongue dishes, making use of raw marinated ox tongue and doing without portions of Asian pear in its mix.

I know many people have reservations about eating raw seafood, never mind raw meat.  But I actually think I've been sick more times after eating a cooked food meal than a raw one!  Years ago when I tried steak tartare for the first time, the waiter suggested I drink some alcohol to help settle my stomach.  This sounds counter-intuitive but it does seem to work -- or at least it doesn't make things worse!  Even so, I don't tend to drink alcohol when eating Thai food; but I guess in that case, some people might say that the garlic and spices help counter whatever bacterias and microbes that might be in the raw prawns!
Posted by YTSL at 11:59 PM

Fun post on hot weather foods you like. I am a big fan of steak tartare but I am fussy about where I eat it. I am friendly with a couple of professional chefs here so I ask them what places are good for steak tartare.

And my favorite Korean dish is Yukhoe which when in New York I would order it at a favorite Korean restaurant which is no longer in business...They served the strips of raw beef oh so ever slightly frozen and by the end of eating the dish the strips of beef were cold but not room temperature. For me, who has little sense of taste, this was a textural treat. And eating in a restaurant whose customers were mostly of Korean heritage the wait person always told me the beef and egg were raw to which I said that's fine with me. Does this differ from the Yukhoe served in Hong Kong.

I think steak tartare is one of those foods -- with raw oysters and sushi among others -- where it's important to make sure you're eating it at a reputable restaurant.

As for yukhoe: I'm happy to learn that you find it a textural treat. Also, I've had the same temperature experience as you with regards to it. As for it being served with a raw egg: that's always been a case with the raw ox tongue dish I have at Yi Pai Yai but not always so with the yukhoe I've had at a few different restaurants here in Hong Kong. I gather that some people are scared of eating raw egg here -- and so also won't have raw egg when eating sukiyaki.

I guess the raw egg fear started since the appearance of Avian Flu a bit more than a decade ago.

For me, I actually like beef\steak to be cooked well done for better taste. However I do enjoy yukhoe served with raw egg and sliced pears once in a while in reputable places.

I also couldn't resist to remind friends that if they do not eat raw eggs, there are actually quite a few deserts that they won't be able to taste. Say, anything with real custard.

I'm guessing you're right re raw egg fears caused by the appearance of Avian Flu in these parts. I guess I like eggs raw and cooked, and ditto re ox tongue and beef. If it's good beef, my preference is for it to be cooked medium rare -- but stuff like burgers I definitely feel safer if cooked at least medium, if not well done!

If eggs are concerned, I like all sorts of them. To name a few:

Just couldn't eat too much of them these days.

Teehee. You sound like quite the fan of eggs -- the same as me, actually! ;)