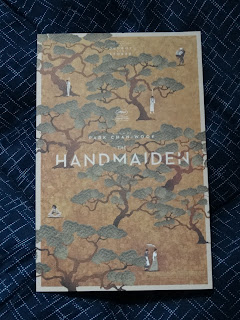 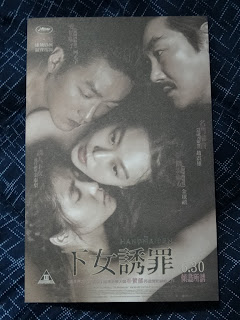 
When I was a young girl in Penang, Malaysia, an aunt of mine had two South Korean friends: siblings named Chang Im and Chang Wook.  Maybe this has subconsciously pre-disposed me to like pretty much every film I've seen by the similarly named South Korean filmmaker, Park Chan Wook; this even though his works have varied so much, and include a drama about the divides and ties between the two Koreas (Joint Security Area), a vampire movie (Thirst), and ultra-violent vengeance films (including Sympathy for Mr. Vengeance, Oldboy and Sympathy for Lady Vengeance).

And then there's his latest, visually stylish interpretation of British author Sarah Waters' Fingersmith, which transposes her tale from Victorian Britain to 1930s Korea.  The Handmaiden had its world premiere at Cannes this past May, went on general release in its native South Korea on June 1st and began its Hong Kong theatrical run on June 30th.  I doubt though that it will ever be screened in territories like Malaysia because of the copious amount of sex and nudity in the film that earned it a Category III rating here in Hong Kong!


Those who seek to view this erotic thriller primarily for titillation should bear in mind, however, that the multi-layered cinematic offering has a running time of 144 minutes and takes a longer time than one might like to warm up and really get going.  Also, director and co-scriptwriter Park Chan Wook has audaciously opted for a Rashomon-style telling of its tall tale that's full of twists, turns, deceptions and betrayals, and may challenge viewers' patience along with ability to keep things straight in their minds by repeatedly going back and forth in time and replaying more than one scene from a different angle.


Still, this much is clear from early on in the film: a Korean con artist masquerading as a Japanese Count (Ha Jung Woo) gets young pickpocket Sook Hee (Kim Tae Ri) to infiltrate the household of a super wealthy ethnic Korean Japano- cum Anglophile who prefers to speak Japanese and be known as Kouzuki (Cho Jin Woong).  Pretending to be a servant called Ok Ju (who is then given the Japanese name of Tamako when she begins her latest employment -- an act of cultural colonialism that's not entirely unexpected in Japanese-ruled Korea), she is made the personal maid of Lady Hideko (Kim Min Hee), an aristocratic orphan who is both Kouzuki's ward and the woman he plans to marry -- despite being old enough to be her father.


Despite Lady Hideko being lovely to look at, the swindler vows that he's really only after the substantial fortune she stands to inherit -- and tells Sook Hee she will get some of it if she uses the considerable influence that personal maids actually have to help get Lady Hideko to fall for him.  But complications ensue when, among other things, Sook Hee develops certain feelings for Lady Hideko that, even if never explicitly named as such, comes across very much as lesbian pinings and actual love.


When the sex scenes finally do take place, they are artistically shot like the rest of The Handmaiden; and artfully to, in order to ensure that even while there's pretty much full female (and some male) nudity in the film, not a strand of anyone's pubic hair is visible on screen.  At the same time, perhaps because some of the scenes and emotions seem to get so overwrought, I have to admit to being unable to keep from smirking, snorting and even laughing out loud at various points of what turned out for some viewers to be an at times unexpectedly -- and perhaps inadvertently -- funny movie!


Looking back though, the first few minutes of The Handmaiden does seem to provide some indications that it was never meant to be an entirely serious drama.  Among other things: there's a larger to life quality to many of the characters, a wicked playfulness to at least one key player in the proceedings and a baroque fantasy feel to a great part of the movie.  In conclusion then: its high production values may deceive people into thinking it's a prim and proper period piece but Park Chan Wook and Co easily ensure that this daringly entertaining -- and unabashedly naughty -- offering is very far from being that!

Thank you for the review.

I really like the novel and I'm very interested in the adaptation. The novel is a maze of twists and turns but also keeps all these at a delightful literary frame.

Thank you for reading the review! BTW, someone you may remember from Mobius (Kathy, the Simon Yam fanatic) had read the novel before she saw the film and liked both. So I think you'll find this movie entertaining too so long as you realize that it's "inspired by" rather than "adapted from" the novel. :)