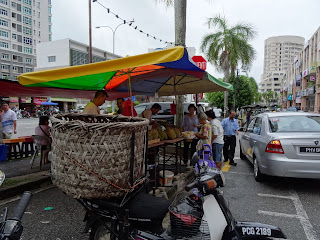 During durian season in Malaysia, temporary stalls
set up to sell the fruit pop up on the side of many a street 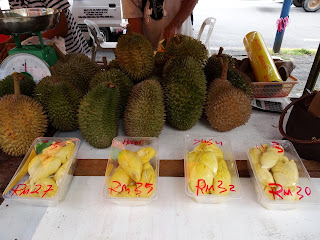 A close up look at some of the varieties on durian
on offer at a stall in the Penang suburb of Fettes Park
A couple of days after I feasted on durian at a farm in Balik Pulau, I informed my mother that my appetite for the fruit had not yet been completely satisfied.  Rather than make another long -- by Penang standards -- journey to "the back of the island", my mother decided to try the offerings at a stall recommended by a friend that's situated closer to my family home.
After being told by her friend that the stall to go to was located in front of a particular bank in Fettes Park, my mother found a woman selling durian at that very location and promptly went about making some purchases, especially upon finding that the fruit were being offered for a bargain RM8 (~HK$15.28 or US$1.97) or so each.  But before the deal was finalized, we got a bit worried when the woman decided to announce, unprompted, that this was the first day that she was selling durian -- and thereby got my mother figuring that hers couldn't possibly be the durian stall that my mother's friend had recommended!
Upon asking around, my mother got to realizing that the more established stall in question was actually a few feet away -- and on the side of the road on which the bank was located rather than right in front of the bank like the stall we were patronizing was.  And as it so happened, my mother's friend was actually at that other stall buying some durian at the same time that we were over at the stall that we had mistaken for the recommended one!
Rather than settle for the seven durian we already bought from the neophyte durian seller (who volunteered the information that she normally sells baked goods!), my mother and I decided to scurry over to the other stall and have a look at what was on offer there.  After a quick look confirmed that it was a far more professional setup (despite being another temporary, seasonal affair), with this other durian seller being able to identify the varieties of durian he had on offer (among other things), we decided to get one more durian: an ang heh (red prawn) that was considerably bigger and more expensive (at around RM45 (~HK$85.86 or US$11.08) for just one fruit).
Also, in contrast to the other durian seller, the guy at this more established stall happily opened up the ang heh we bought and proceeded to fill up one and a half plastic containers with the fruit's beautifully orange-colored flesh!  As I told a friend living in Hong Kong (where I've never seen such a thing being done at the time of purchase), this action essentially guarantees that the seller's not cheating you -- and that he or she is fully confident about the quality of his or her wares -- since you're being shown there and then what (and how much) you have bought.
As it turned out, the flesh of the seven other durian we bought that afternoon ended up filling two other plastic containers of around the same size as the ones into which the flesh of the ang heh had been loaded.  So, quantity wise, the purchases from the two stalls proved to be about the same value.  As for quality: I have to say that I did prefer the taste of the ang heh (which probably are my favorite variety of durian along with the D24 -- though I have to qualify this by pointing out that I've yet to have fresh versions of the super expensive Musang King or Black Thorn); but both my parents actually preferred the "no name" durian from the first time durian seller which they reckon were "kampung durian" from old trees.

Maybe the kampung durian represented a taste of nostalgia for my parents, who had many of those in their youth as well as over the years.  The point though is that these "no name" durian really ought not be sniffed at (no pun intended!) when they are the fruit of old trees -- since it's often believed that older is better when it comes to the fruit of durian trees.  And as a matter of fact, one of the tastier durian we had over at the farm in Balik Pulau was a kampung durian from an old tree which the farmer looked to have considered to be of equivalent quality to the "name" durian (including an ang heh) that he had put on our table! ;b
Posted by YTSL at 7:03 PM

For a while we had Jack Fruit in one of our stores. I wish I bought a small chunk so I could say "I tried it"
Coffee is on

I *was* back in Penang -- and yes, for durian! You were in Penang for durian too??? To be honest though: think we'd have a better chance of meeting in Hong Kong than Penang (or Singapore)!

Durian do resemble jack fruit but they taste VERY different! ;b