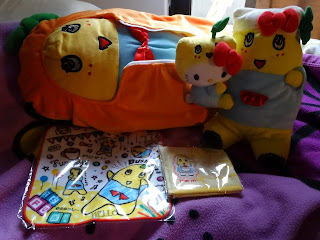 The first Funassyi-themed items that
came into my possession ;b 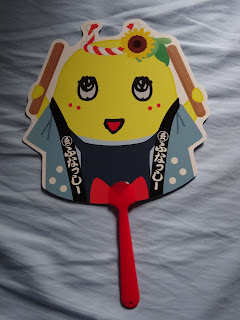 The first Funassyi-themed item
I ever bought for myself :)


Less than a month ago, I made my Funassyi love public on this blog.  In that post introducing the hyperactive pear fairy from Funabashi to this blog's readers, I included a photo of some of the Funassyi-themed merchandise I had bought on my most recent Japan trip.  But I neglected to mention that I already owned some Funassyi-themed items even before I headed over to the Land of the Rising Sun this past May.


With Funassyi-themed items (still) being rather thin on the ground here in Hong Kong (despite The Pear having visited the Big Lychee in the past), I really had only found one thing that I considered worth buying after searching around town for several months.  This was a festive-themed fan which I've put to good use when doing such as waiting in Victoria Park for this year's July 1st rally to begin; and which actually wasn't the first Funassy-themed items that came into my possession since a kind friend who visited Tokyo over Chinese New Year went and got me not only the Sleeping Bag Funassyi I had yearned for after learning of its existence but also a Funassyi-Hello Kitty double plush (the result of a collaboration between The Pear and the cute cat character it refers to as its senpai (i.e., elder in the same profession)) and a couple of cool towelling handkerchiefs.

Incidentally, it's interesting that The Pear considers Kitty Chan its senpai since, as it so happens, today's supposed to be Funassyi's 1878th birthday on account of its birthdate being listed as July 4th, 138 in its official biography!  The thing though is that there does seem to be some uncertainty with regards to The Pear's real date of birth; not least because this popular Twitter persona's first tweet (back on November 21st, 2011) was an announcement that its birthday falls on November 22nd rather than the day that can written as 7/4 and which can is pronounced in Japanese as "na shi" (like the Japanese word for (Asian) pears)!

Regardless of which date its birthday actually falls on though, this much is clear: Funassyi is a pear fairy which descended onto the city of Funabashi to cheer up humans, whom it detected were still depressed by the Great East Japan Earthquake of March 11th, 2011, and its aftermath more than one year after the disaster.  In the few years that it has been on Earth, The Pear has become greatly popular in Japan and also come to possess a number of fans in other parts of the world including English rock star Ozzy Osbourne, his wife Sharon, their son Jack and, of course, this blogger who wants to wish this wonderfully entertaining character a happy birthday and say thank you for having made me smile, giggle and laugh so very much already. :)
Posted by YTSL at 9:14 PM

I wasn't familiar with Funassyi. Fairies cheer me up but I usually spot them in flowers after I download macro shots.

Hello Kitty is still some what big here. I have a few pen pal who is into "Hello Kitty" if I fine something of Kitty which I put in to envelope I will sent it.
Never heard of Funassyi.

Funassyi's not very well known outside of Japan (and Taiwan)... yet. But believe it or not, it's visited the US a few times already and its visit to the Empire State Building was commemorated with a photo!

BTW, any chance of your sharing some of the photos of fairies you've taken? ;b

Very cool to hear of Hello Kitty's popularity among your pen friends! Maybe you can introduce them to Funassyi via a link to this blog post? ;b