Reflections on Malaysia and Malaysians, on Merdeka Day 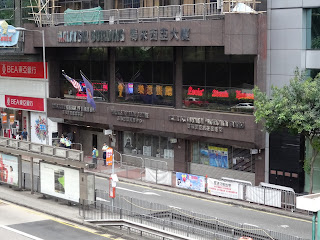 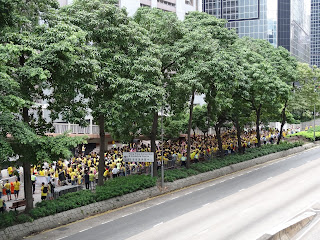 This past Saturday afternoon, a crowd of yellow T-shirt
wearers congregated over on the other side of the road
and made their "Bersih" demands


Fifty-eight years ago today, a Kedah prince popularly known as Tunku Abdul Rahman shouted the word "Merdeka" ("Freedom" in his native language) in a speech delivered at midnight that heralded the birth of the new nation of Malaya.  But it actually wasn't until September 16th, 1963, when Sabah, Sarawak and Singapore (which was expelled just two years later) joined with the Federation of Malaya, that Malaysia actually came into being.


Regardless of whether one considers August 31st, 1957, or September 16th, 1963, as Malaysia's birthday, it's a young country by many people's estimation -- including my parents who, more than once, have noted that they're older than the country that they're citizens of.  And although a number of decades have passed since I read an article entitled "Malaysia: Youthful Nation with Growing Pains" in a 1977 volume of National Geographic magazine, I reckon that it's true enough that Malaysia still has a ways to go towards becoming the kind of mature and developed nation-state that many of its citizens want it to be.


When I first came across that National Geographic article all those years ago, I was a little patriot who bristled at the portrait painted of the country of my birth being one that wasn't entirely positive.  But I jettisoned the rose-tinted glasses through which I viewed Malaysia long ago, and these days definitely do see the flaws in such as its political structure (particularly its electoral system) and administration.  Furthermore, I've never hidden my preference of Hong Kong (over Malaysia along with the rest of the world) as my chosen home -- and happiness at having achieved permanent residency status here in the Big Lychee.


For all this though, I still do identify myself as Malaysian when people enquire about my nationality.  (And for the record: I do not see a need to qualify my Malaysian-ness by including my ethnic grouping before or after "Malaysian".)  And while there's much about Malaysia that I do criticize, I also definitely have done my share of defending and praising of those aspects of the country that I feel justified in being proud of.


This Merdeka Day, there are reasons to worry about and bemoan Malaysia's current situation, but also reasons to take heart.  On the negative side: Last week, the Malaysian ringgit sank to a 17-year low and not completely unrelatedly, Malaysia has been embroiled in a political crisis for some months now, due in no small part to its present prime minister, who has been dogged by scandal even before he assumed this top post.


On a more positive note: this past weekend, an unprecedented number of Malaysians took part in Bersih rallies in Kuala Lumpur and scores of cities in various parts of the world (including Hong Kong) to demand such as clean (as in fair and free) elections and a clean (as in transparent and uncorrupt) government ("bersih" means "clean" in Bahasa Malaysia).  And in the 34 hours that Malaysians were protesting out on the streets of Kuala Lumpur, it was actually peaceful; thanks in no small part to the police not firing tear gas and water cannons at the demonstrators unlike, say, at the smaller 2011 and 2012 Bersih rallies.


To be sure, it shows how angry, frustrated -- and maybe even desperate -- many Malaysians have become about their country's current political and economic situation that they are willing to take part in mass protests which resulted in images that bring to mind the Umbrella Movement for many Hong Kongers.  But it's worth noting that these kinds of actions also take courage.  In addition, I'd argue that people must still feel hopeful that they can make a difference and the situation can be changed.  Otherwise they just wouldn't bother to do anything, especially that which puts them at personal -- and professional -- risk.

So on this day, I feel sad for Malaysia but also retain some hope for it -- along with some pride in, and gratefulness to, those of my fellow citizens who have shown the world and one another that they actually do care for their country, and much more than those like the pathetic fellow who called the Bersih protesters shallow and unpatriotic will ever know and understand.
Posted by YTSL at 11:07 PM

Eeeee, I didn't know you had a blog!!! And urgh, cringe re that Malaysia Truly Asia stuff but hmmm, sometimes I think that's more true than Hong Kong as Asia's World City! ;b

Yes HK tuely is one beautiful city and oh I took some of your pics hope you don't mind :P

Please note what I wrote on the side of my blog re "Content information": i.e., "No publishing elsewhere without permission and/or acknowledgement and link back to this blog please!"

Thanks for telling me that you took some of the pics. But hey, you took some nice photos of your own on that hike, as I recall -- and I think you should focus on showcasing those. Still, if you feel a need to use my photos, I'd appreciate your acknowledging my contributions over on your blog -- and it'd be particularly cool if those who check out your blog post are attracted to come over to my blog. :)