Despite there being hundreds of kilometers of clearly marked trails, every once in a while, one has the urge to really go off the beaten path and along one of the footpaths marked on Hong Kong countryside maps as "difficult/indistinct or seasonally overgrown". Sometimes, this decision pays dividends in terms of scenic views and an overall enjoyable excursion.  At other times, the going proves to be more difficult than one wished it would have been the case.  It's really rare though that I've felt forced to backtrack rather than complete the planned route.

In the case of Mount Hallowes, I can't help but think that my hiking buddy and I tried to conquer it on the wrong day; one in which we encountered considerably wetter and muddier conditions than expected.  Some day, I hope, we'll be able to get to the top of the second highest peak in Sai Kung East Country Park; this not least since we -- and another friend -- already have been up the Sai Kung Peninsula's highest hill in 481-meter-high Shek Uk Shan! ;b 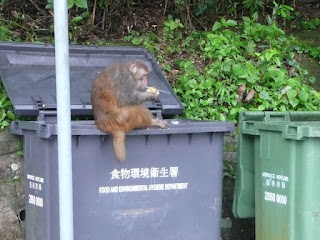 The first shock of the day: seeing a monkey
so far away from Kam Shan Country Park! 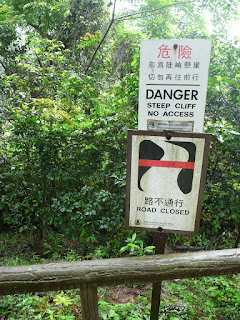 The second shock of the day: seeing these signs
where we thought the trailhead for one of the
paths leading up to Mount Hallowes was supposed to be! 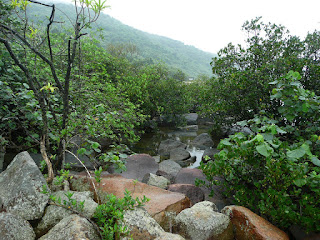 Well, while wandering around looking for another trail up the hill,
we did at least pass through a fairly scenic area ;S 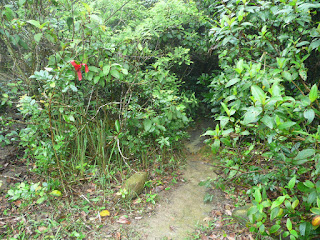 Some red ribbons left by those who had gone before us
-- and, we presumed, knew what they were doing! 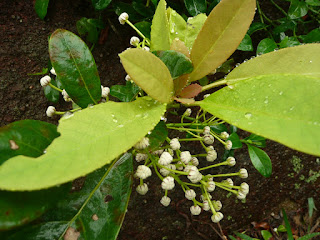 See how wet the leaves (and rock surface) were? 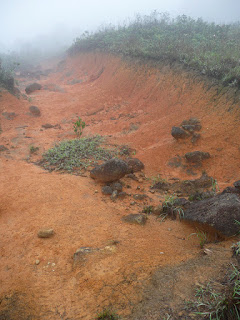 To make things worse, we encountered mist
in the further reaches of Mount Hallowes! 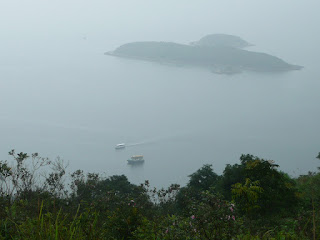 We did get to a point where we could spot (and identify)
Flat Island (Ngan Chau) and Moon Chau (Mo Chau),
but decided to head back down the hill soon thereafter 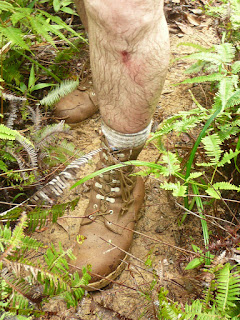 Among the day's hike "souvenirs" was this puncture wound
my hike buddy acquired after he walked into a sharp-edged
boulder that had been partially obscured by the vegetation! ;(
Posted by YTSL at 8:50 PM

You may not have made it all the way up Mount Hallowes, but any hiking experience in nature isn't time wasted. Using your link to the photos of Mount Hallowes, it does look like a view worth trying for again...Also enjoyed revisiting your link to your stupendous photos of the view from Shek Uk Shan. I've bookmarked this view in my mind, and would consider my travels incomplete, unless I experience this view for myself sometime in the future.

Too true re hiking experiences not being time wasted but I'd like my hiking experiences to be more comfortable. Forgot to mention that on the same hike, I slipped and fell into a (fortunately not deep) stream. Also fortunately, it was towards the end of the hike, so I didn't have to move about in my waterlogged boots for longer than I ended up doing! ;(

Put another way: I'd much prefer hiking experiences like last week's to Shek Uk Shan... ;)