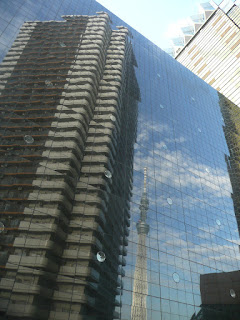 This 119 minute-length crime drama is based on a manga series which ran for two years in a monthly magazine.  And although there's one character who is the main focus of the film, a number of other supporting characters also get quite a bit of screen time and opportunities to make the viewer(s) feel for them.  Add in its critiques of contemporary Japanese society (in particular its treatment of the unfortunate souls who encountered difficulties earlier in their life that then appear to irrevocably damn them in the eyes of more fortunate others) and you've got quite the complex and ambitious film in director Yoshihiro Nakamura's follow-up to last year's impressive The Snow White Murder Case.

Soon after an arson attack on a food processing plant, the police cybercrimes team headed by tough female detective Erika Yoshino (Erika Toda) come across a video clip released online by a masked man who appears in it -- and a number of similar videos -- issuing "prophecies" which he then turns into reality.  A vigilante out to make errant companies and people who've behaved badly pay for their maltreatment of innocent others, he becomes an internet sensation; particularly after he offers to mete out rough justice on his audience's behalf to people who have wronged them.

Although the authorities take some time to uncover the identity of the mysterious "Newspaper Man" (so named because his mask's fashioned from a newspaper sheet), Prophecy's audience quickly learn that he's actually four people acting in concert rather than just one individual operating alone. And while it's pretty clear that this Kanto-based quartet's brains is a sensitive-looking techie nicknamed Gates (Toma Ikuta), the rugged ex-musician dubbed Kansai because that's where he originally hailed from (Ryohei Suzuki), a bespectacled former NEET nicknamed Nobita (Gaku Hamada) and the food-loving Metabolic (the consistently scene-stealing Yoshiyoshi Arakawa) also definitely do play their parts in the whole affair.

In flashback scenes, Gates is shown getting badly bullied by his boss -- and given scant support by his colleagues -- at an IT company where he had been a temporary worker for close to three years (after which he would have become a permanent employee).  After collapsing at work one day, he not only loses his job but also goes into debt because of the medical fees he incurred and ends up with a space in his employment history (due to his hospitalization and such) that makes other companies refuse to consider hiring him.

In desperation, he accepts a dangerous job dumping toxic waste illegally.  Although treated badly once again by the boss, this time around, Gates finds friends among his hard-laboring co-workers (who include Kansai, Nobita and Metabolic).  Encouraged by one another, their spirits soar.  Sadly, however, their dreams of getting their lives back on an even keel fall apart one fateful night when one of their number, a young man (Kohei Fukuyama) who had come from the Philippines to look for the Japanese father who had abandoned him and his mother, pays the ultimate price for having sold a kidney to pay for the journey over to Japan.

Although Gates and his fellow "Newspaper Men" operate on the wrong side of the law, it's easy to sympathize -- even empathize -- with them and support many of their actions.  But rather have their main pursuer come across as a bitchy, unthinking puppet of the Establishment, Erika Yoshino too is admirably made to come across as a sympathetic character -- one who has had her own obstacles imposed by society to overcome in life.

As Prophecy moves towards its conclusion though, a number of plot twists over-stretch the story's overall credibility and dilute some of the messages about society that the film's makers had looked to try to advance.  The last 10 minutes or so of this movie are by far its weakest.  If not for the offering having been as emotionally enthralling and involving earlier on, serious damage would have been wreaked.  But as it stands, even as my brain was thinking that those final bits were on the hokey as well as far-fetched side, I still couldn't help but shed a few tears for the key characters and what could have been for them (as opposed to just the work itself).