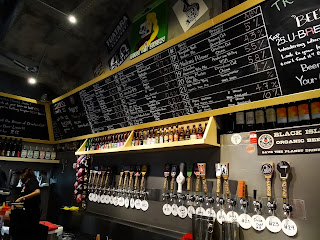 Would you jump for joy if you had more choices
of craft beer to try than this selection? 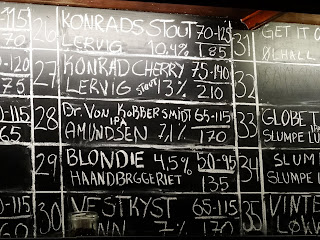 And how do you feel about beers that have up to 13% alcohol?! :O


A couple of months ago when I walked into Mack Brewery's Ølhallen brewpub in Tromso, Norway, a part of me thought I had died and gone to heaven because I had never been in a pub with 56 beers on tap before.  In Hong Kong, the Roundhouse Taproom looks to have the most beers on tap, at just 25.  But while just a few years ago, I'd have said that Hong Kong wasn't a place for fans of craft beer (or microbrews), the existence of the likes of Beertopia have changed my mind.

So imagine the disappointment I felt when I learnt that this year's edition of the mega craft beer fest would not take place in March (as was the case last year).  Instead, I'd have to wait a few more months to take part in this event since Beertopia 2015 was rescheduled this year to October -- and the venue moved from the West Kowloon Cultural District across Victoria Harbour over to the Central Harbourfront.


Still, now that August is almost over, October doesn't feel so very far away -- this not least since the dates for this year's Beertopia have now been fixed and announced, and "early bird" tickets for the events have gone on sale.  (Oh, and there's also the small matter of the more than 550 beers that will be available to taste having been announced, including Norway's Nøgne Ø!)

For the record: I've already got myself a ticket for the second day of Beertopia -- with the plan being that I'll go during the day, in the hope that the atmosphere will be "chill" and the crowd not on the thick side then.  In other words: I'm hoping for a repeat of the very enjoyable Beertopia experience I had last year.  And if any of this blog's readers are also hoping and planning for the same, do please let me know -- and maybe we could actually meet up and go taste some beers together there! :b
Posted by YTSL at 11:59 PM

Hi!
just wondered: do you know what Nøgne Ø means?
tone

Also learnt in Norway that it's not pronounced "Nog-neh O" the way that it looks like to English speakers! How DOES one correctly pronounce the name?! ;S

hi!
Of course you did;)!
As you well know then it is a quotation from Ibsen (the great playwright) In those days we were forced to write like the Danish, so today it would be spelt "Nakne Øy" The letter Ø is unique to Danish and Norwegian and is pronounced like the "i" in bird. So that will give you some pointers towards how to pronounce it. ( just keep in mind that we don´t really speak or write like that anymore)
Tone

By the way, I have a friend who is writing a book about every beer made in Norway. Maybe i should send you a copy when it´s finished?
Tone

Hmmm... I think I should have paid more attention when I was in Norway and heard people pronouncing Nøgne Ø! ;(

And woah re your having a friend who's writing about every beer made in Norway. When will that book be published? It seems like Norway has A LOT of different kinds of beer! :O

New beers from Nøgne Ø
I know you can\t read Norwegian but I guess you can understand some based on the names.
http://www.abcnyheter.no/livet/2015/09/04/194870494/genialt-eller-galskap-fra-nogne-o

Thanks for the heads up! I wonder if any of them will make it to Beertopia. Currently on the Beertopia list are Nøgne Ø's Citra Single Hop, Global Pale Ale, M.O.L.E. and a Mikkeler-Jing A collaboration. I am hoping they'll be serving them on draft! ;b

Walked by Craftissimo at Tai Ping Shan Street earlier (https://goo.gl/maps/HaVpt). It's at the back. I saw they have two taps there with some huge kegs. I didn't ask what's on tap as I'm still holding half a bottle of Old Rasputin while I walked in. Maybe I'll ask and see what's on their tap next time.

They have a shelf for local brews, as well as other imported stuffs. I also heard the Bottle Shop is going to open a branch/bar in Central soon. The competition is really on, I think.

I walked past the Craftissimo on Hong Kong Island earlier this week too. Didn't go in as I wasn't in the mood for beer. (Yes, there are times when that's so! ;b) For now, I have loyalties to Brewcraft (which is in a more convenient location on Cochrane Street). But let's see how it goes.

And yes, definitely re the competition hotting up. BTW, have heard that The Roundhouse will be opening a branch over in Wan Chai. Also, the Coeedo Taproom has opened in Causeway Bay -- but I've not been impressed thus far. It seems on the disorganized side and the staff not knowledgeable.

I've read about the Roundhouse branch in Wanchai. I guess we have to wait as it is not opened yet.

At the very least, I sure hope that the Wan Chai branch of The Roundhouse will have more comfortable seating than the original branch in Soho! ;b