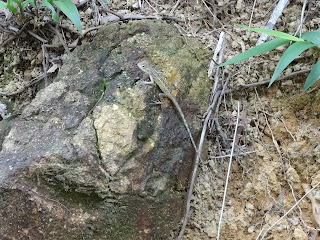 One of two lizards I caught sight of on today's hike 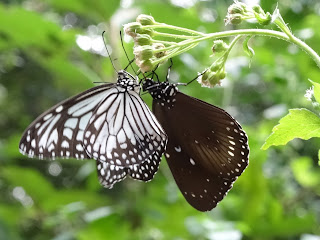 Two butterflies hanging out side by side 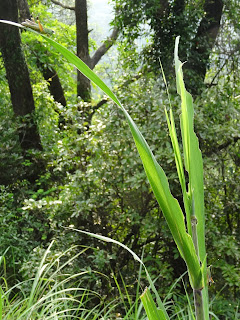 Can you see the two grasshoppers in this one photo? :b


As today's weather forecast was for another very hot day in the Big Lychee (one which turned out to have maximum temperatures of 35.9 degrees Celsius recorded over in Yuen Long and 35.2 degrees Celsius in Tsuen Wan), I picked a hiking route to go this afternoon that I knew would have plenty of shade over in Tai Lam Country Park.  The trail that took us from Tsuen Kam Au to Sham Tseng also has the benefit of a few hundred meters above sea level for a good bulk of it -- and it really did feel noticeably cooler for much of our countryside excursion, especially in the shady spots where we encountered cool breezes, than in the city below.


Although Hong Kong's second largest country park doesn't have scenery as stunning as that to be found over on Lantau Island or the Sai Kung Peninsula, I generally enjoy the hikes I go on there -- thanks in part to my often encountering lots of interesting and/or pretty critters on each of my treks in the area.  With sightings of lizards, butterflies, grasshoppers, dragonflies and more, today's hike was another one which yielded plenty of critter spottings.

On two occasions, I came across sights made unusual not by the type of creatures in the frame but by their two of the same types of insects being so close to each other, yet not engaging in any randy behavior!  In particular, the two butterflies I spotted hanging out near a bunch of flowers looked like they were engaging in conversation!  Alternatively, I wonder whether each of the two grasshoppers hanging out on the same plant realized that they actually had company on it -- since what's a small distance to larger beings like us isn't to small creatures like them!


By far the strangest part of today's hike was not a critter or any other spotting but, instead, the loud noises we heard that sounded as though they were made by a creature that was in quite a bit of distress.  My hiking buddy said that shortly before we heard the din (which I had initially thought was the croaking of particularly loud frog but which my friend reckons may have been made by a wild boar), he had heard the kind of sounds that could have been caused by a large creature breaking tree branches and such.  So we got to speculating that a not small animal had slipped on a slope, fallen and broken a limb.


However hard we tried though, we couldn't spot the critter in the densely forested area several meters below (we were walking closely to the edge of a hill when the incident occurred).  So, sadly, we couldn't help it in any way like, say, reporting the animal's whereabouts to the country park authorities.  After a few minutes, the sounds stopped -- and if the creature was in great pain, it would have been best for death to come quickly.

For the record: Wild boars are among the wild animals found in Hong Kong that I've not caught sight of in the wild to date -- and to be honest, I'm not sure that I'd want to do so!  Having seen them on a visit to Kadoorie Farm and read that they can grow up to 2 meters in length and weigh up to 200 kilograms, I think I'd find them a scary sight -- be it in nature or when they choose to venture out into the more urban areas of the territory, as some of them have done earlier this year! :O

Update: my friend did some research after we returned from our hike and discovered that the strange animal sounds we heard are what barking deer (aka muntjac) make to signal trouble. The only species of deer found in Hong Kong, it is a protected animal.  There have been a number of sightings of them over the years but there appear to be no records of how many barking deer there (still) are in the territory.
Posted by YTSL at 11:05 PM

Wild boar sightings are quite common these days. If you are lucky you might be able to see them even in city districts in broad day light. I think you remember a piglet 'invaded' a shop in Hang Fa Tsuen months ago and it was even featured on CNN. There were traces of them even in my neighbourhood in Ap Lei Chau.

I have seen traces of wild boars along various hiking trails on Hong Kong Island and even in the Peak area. If you know what to observe you should be able to find holes or depressions caused by their digging for food. Wild boars have exceptional sense of smell. If they sense food in the soil they could use their snout and their tush for a little push and then they have it.

I have seen a big one from afar a few years ago. It was an afternoon and I was walking home along Victoria Road when I saw it down at a stream or nullah some 50-100 metre down the slope. The are not as big as water buffaloes but they are even more dangerous if startled, especially the females with piglets.

I'm not sure I'd consider it a fortunate sight if I came across a wild boar, be it in an urban or rural setting! I'd actually prefer to catch sight of a barking deer -- which I've just updated my blog post to add was the animal that my friend and I now reckon whose sounds we heard yesterday afternoon... ;)

Thanks for the info re the wild boar though. Very interesting! :)